The Daily Nexus
News
UCSB Performers Collaborate for Gauchella
April 19, 2013 at 5:00 am by Rosalinda Diaz

The second annual Gauchella performing arts festival will take place this Saturday from 1 p.m. to 5 p.m. in the UCSB Theater and Dance courtyard.

The event, which is put on by all-female a cappella group VocalMotion, consists of several free performances bringing together a variety of UCSB performing arts groups and organizations along with an art exhibition. Gauchella was founded by current VocalMotion Performance Manager Lisa Gray, a fourth-year economics and accounting major, who is also the founder of SB Glee Club — the group that hosted the event last year.

According to Gray, performances will consist of slam poetry, spoken word, singing, dancing and improvisation.

“Gauchella is a collaborative performing arts festival,” Gray said. “It started last year, and it was originally hosted by SB Glee. This year VocalMotion is hosting it. It’s obviously a play on Coachella where there are several different venues. For us, there are three venues: one for things like improv, spoken word, slam poetry and theater; one for dancing and one for signing.”

After SB Glee was discontinued, Gray said, VocalMotion decided to take on the event due to how well it was received by the student body.

“When we decided to disband that group [SB Glee], my a cappella group decided to take on the event because it was so popular. A lot of the organizations at the Office of Student Life registration in the beginning of the year expressed a lot of interest and they really wanted it to come back.”

Gray said last year’s Gauchella acted as a “kick off” since many people were not aware that it was happening. This year, she said, she hopes the event will become more prominent.

“This year it should be a lot more accessible,” Gray said. “Last year, because of the short time, a lot of performances overlapped so that you couldn’t see all of the performers. This year we’ve expanded the time line so that you could essentially see everyone if you wanted to.”

According to Gray, VocalMotion began reaching out and searching for performers earlier in the year before the event. Some of this year’s performers include the Urban Dance Company, Naked Voices, InterVals, WETT, Laughology and Improvability.

“The whole point of the event to begin with was to help all of the performing arts groups collaborate and kind of cross the borders,” Gray said. “Everyone has their genre and are friends within themselves. This was kind of a way to bring them all together. We had to reach out and make those ties.”

In addition, Kirby Welsh, VocalMotion president and fourth-year biology major and education minor, versatility is the key aspect of the event since people have the opportunity to visit multiple different stages depending on their interests.

“We are really trying to be a collaborative arts festival because a lot of organizations kind of have their own things,” Welsh said. “Last year it worked out really well. We also get exposed to other groups we didn’t know existed.”

Welsh said VocalMotion has been avidly promoting the event because of the entertainment it will provide for audience members and also the opportunity it grants attendees to find out more about organizations and clubs on campus.

“[We are] really trying to promote it, especially because it is free, which I feel like a lot of the times is not the case for concerts since you have to pay for venues,” Welsh said. “I have to give 100 percent credit to Lisa; she has organized and run everything. VoMo is helping her in any way, but she invented this so it’s really her baby. We’ve all been helping her by promoting to different businesses, asking them to donate. We’ve been contacting all of the organizations on campus to participate [and] we’ve been making flyers and putting them everywhere. People should just know that there is going to be exposure to everything and anything … there is just so much to offer that day.” 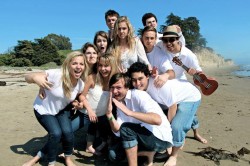 Lisa did a GREAT job organizing this event!
She worked very hard all day, making sure each group was lined up and ready to perform. All of the groups were so talented! Great day!
GOOD JOB LISA!!!!