The Daily Nexus
News
Award-Winning Comics Theorist and Cartoonist to Discuss Development of Art
April 10, 2013 at 5:00 am by Daily Nexus Staff

Tonight, renowned comic theorist and author Scott McCloud will give a lecture titled “Comics and Visual Communication” at Campbell Hall, discussing the overall evolution of comic art in its many forms.

The lecture, which will begin at 8 p.m., is an installment of the 2013 Regents’ Lecturer program within the Writing Program. This program welcomes scholars to participate in a residency at UCSB that typically includes the guest lecturer hosting one or two public events as well as classes and workshops related to their field. During his lecture, McCloud will touch on the new technologies involved in the field of comics, as well as the art form’s international effects and literary objectives. The event is free and open to the public, and books will be available for purchase and signing.

McCloud is well-known for his work Understanding Comics, a 1993 bestselling piece of non-fiction which uses the medium of a comic book in order to explore the inner workings of comics and their ability to provide social commentary. McCloud is also the creator of the science fiction comic series Zot!, and is well-known for other non-fiction works regarding the world of comics, such as Reinventing Comics (2000) and Making Comics (2006).

In addition to McCloud’s lecture, there will be a symposium this Friday that will feature a discussion between McCloud, UCSB faculty and graduate students. The Comics Cornucopia will begin at 10:30 a.m. at the Theater & Dance Building courtyard and Room 1530, and will feature a roundtable discussion on the question of the modern graphic novel entitled “Is the 21st Century the Age of the Graphic Narrative?”

Following the talk, there will be a celebration for the winners of UCSB’s first-ever April Fool’s Comics Competition. The event will include improvisational comedy performances and activities in which participants can create their own comic pieces. The event will begin at noon and run until 3 p.m. 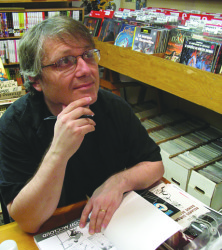 Scott McCloud holds a thoughtful pose. The acclaimed comics artist and theorist is most famous for his non-fiction works on comics.

A version of this article appeared on page 1 of the April 10th, 2013’s print edition of the Nexus