Aspiring comic artists and fans alike: get excited! This April, UCSB will host its very first April Fool’s Comics Competition. Thanks to the Department of Art, Theater & Dance, the College of Creative Studies, the Arts Library and the Interdisciplinary Humanities Center, anyone in the Santa Barbara and Ventura area can submit their work and have a chance at being immortalized on the shelves of Davidson Library. Other prizes include having your submissions published online and various gift cards to places such as Metro Comics and more.

Fourth-year Japanese and CCS book arts major Kevin Shintani explained that with the help of associate professor of history of art and architecture Miriam Wattles and graduate student Kane Anderson, the idea for the competition was born.

Comic books, Shintani explained, are the unsung heroes of narrative. He emphasized that although it may not be a mainstream form of art or considered art at all, comics stand on their own and in a positive way. Unlike movies, comics can be easily made and distributed by one person. He also pointed out that although literature can describe images, it does not fully illustrate the atmosphere intended by the author, whereas in comics the atmosphere is right there staring at you from the page.

In hopes of making the comic book scene on campus more prominent, there will be a number of exciting events for comic lovers next month. This includes a lecture by Scott McCloud (author of Understanding Comics: The Invisible Art and creator of the classic comic book Zot!) at Campbell Hall on Apr. 10 at 8 p.m. On top of that, the department will be holding UCSB’s own miniature Comic Con dubbed Comics Cornucopia, which will host various activities such as cosplay competitions and comic studies panels; an array of submissions from the competition will also be displayed.

So if you’re a DC or Marvel fan, a manga fan or a Sunday morning newspaper comic strip fan, why not show your interest or talent by submitting a page or two to UCSB’s first Comic Book Competition? The only requirement is that the comic somehow addresses April Fool’s Day because — surprise, surprise — the submission deadline is the first of April.

For more information, you can check out the website at http://artsite.arts.ucsb.edu/comics/. Any questions can also be sent to UCSBComics@gmail.com. 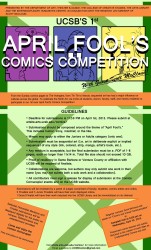 A version of this article appeared on page 7 of March 7th, 2013’s print edition of the Nexus