The Daily Nexus
Artsweek
Alpha Punk Takes Home Top Honors at Battle of the Bands
March 7, 2013 at 5:00 am by Audrey Bachelder

Like live music? Like mosh pits? Like pop-up bands that win big events? Well I hope you went to the Battle of the Bands on Wed., Feb. 27, because it was a savory night of all of these things at The Hub.

This year’s winner of the Battle of the Bands and the highly prized opening spot at the 2013 Extravaganza goes to the newly formed Isla Vista band Alpha Phunk. Alpha Phunk is jazz meets funk meets soul sister coolness, plus a little bit of L.A. rapper twang. If their genre isn’t entirely clear, one thing is: the trumpet added to the concoction in a big way.

“I like how [Alpha Funk] features everyone in the band and lets everyone do a solo. It’s very cool. And the trumpet, whoo wee! The trumpet was the best part,” said second year Helen Irias.

First to the stage and lead by powerhouse vocalist Melo, Alpha Funk had a well-deserved win. Melo’s soulful tone and gorgeous high notes made the audience swoon. She had great onstage chemistry with MC Larcy Hall, who used his talent to give the band an extra hip hop vibe. Seeing as Alpha Phunk was only formed a couple of months ago, it was neat to see how a pop-up band could go as far as winning the coveted opening spot for Extravaganza, which has a legacy of bringing recognition to Isla Vista artists like Rebelution. That being said, I do think there are some other artists that deserve recognition for their performances as well.

Best Tune, in my estimation, goes to The Olé’s for their fabulous “Back-to-1959” song. I have no idea what it is called, but whoa was it good. Lyrically it might not have been the cleverest (“Tell yo Mamma, tell yo Pa, I’m gonna take you back to San-ta Barbara …”) but the tune was fantastic. Plus The Olé’s were simply a joy to watch. Lead vocalist Matt Tweed had great energy and amped up the crowd tremendously, from jumping around like an excited pinto bean to getting the audience to repeat mm’s and ohhh’s. The audience had a great time chanting “Olé, Olé, Olé” in that familiar Gaucho way. Formed in the freshman dorms a couple of years ago, The Olé’s are a reggae-alternative band that likes to infuse Isla Vista into their lyrics. “Sabado Tarde” is entirely about having a lazy Saturday, Isla Vista style.

Best Performance goes to Ellison Hall. Whether or not you like their sexually charged numbers or frantic punk style, you’ve got to admit lead vocalist Gene Adler has a way with the stage. Adler sang in a frenzied manner, gnawing the air and repeatedly pulling his white v-neck down to reveal a large amount of chest hair. He blew kisses to his band-mates, went cross-eyed, guzzled a Dasani and then proceeded to use the empty water bottle as a tambourine while screaming, “She’s got a devil inside!!” People around me kept mentioning that Ellison Hall was equivalent to the band in Scott Pilgrim vs. The World.

“They just encapsulated everything that’s great about the griminess of rock ‘n roll. That was fantastic,” said second year Michael Thornton. “It wasn’t my type of music … But I had to look! It was captivating to see someone [like Adler] on stage.”

Award for Enabling a Mosh Pit goes to Sloppy Job. If there is a word to describe them, it is: fast. As soon as they started tearing up the stage with NOFX-esque speed, a mosh pit formed and it continued throughout the entire set. At first it was a danger zone — shoving, pushing, pointy elbows and stubbed toes. By the third number, it had slowed to a jovial march. Hyped and sweaty concert mongers paraded in a circle, stomping to the fast beat of the punk band. The lead singer forgot to introduce them as Sloppy Job, but he did give a shout out to the next coming attraction, saying, “I heard Andy Dick and the Dicks were coming out next! They might play better than us — but we play faster!!”

Award for Having the Most Supporters in the Crowd goes to Andy Dick and The Dicks. The crowd went insane for Andy Dick and The Dicks. They chanted them onstage, booed when they didn’t win and screamed “Lemme see that dick” several times in hopes of receiving an encore. They were the only band to have a visible fan club: several girls held laminated signs bearing the words “We Want the D” (nice). Besides having a classy name, Andy Dick and The Dicks showed The Hub that sometimes, simplicity is key. As the only band with three members, it was nice to be able to hear every single musical instrument without lengthy drum or vocal solos. Not that solos are bad — it was just nice to hear a band that didn’t stop and go so much. Their best number was a rendition of Tupac’s “Change.” Oh, and did I mention that their drummer was also the lead singer? He was also heavily involved in the moshiest of pits during Sloppy Job’s set. And he wore a UCEAP shirt.

This year’s Battle of the Bands was a night of music-making and mosh-pitting merriment. To be honest, I didn’t find it as enjoyable as last year’s show as it missed some of the dance-ability factor, but it was still a groovy night. Congratulations to Alpha Phunk and all the other performers! 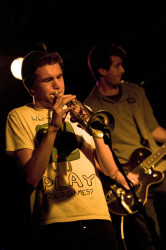 The recently formed band Alpha Punk won this year’s A.S. Program Board Battle of the Bands and the opportunity to open Extravanga.

A version of this article appeared on page 7 of March 7th, 2013’s print edition of the Nexus

The band name is neither “Alpha Funk” nor is it “Alpha Punk” it is actually Alpha Phunk.

Congratulations Laurence
I can’t wait to hear the band