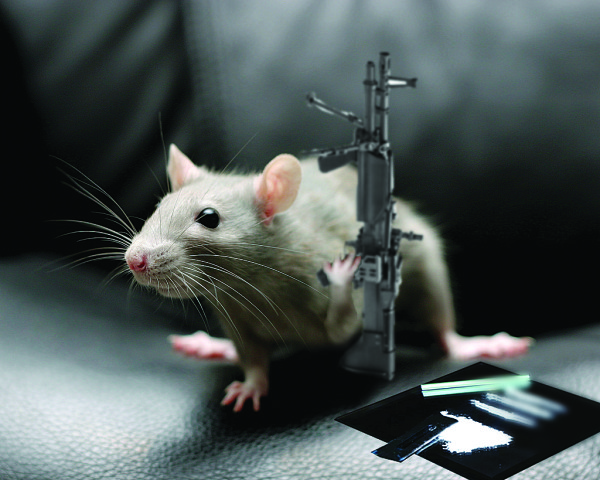 Gang violence and other crime ramped up in the cages after budget slashes limited the supply of cocaine.

A UCSB study examining the effects of cocaine addiction in rat populations was raided by the Drug Enforcement Administration last week due to allegations of illegal possession and distribution of narcotics.

The 50 rats that took part in the study are currently being held at the Santa Barbara County Jail on $50,000 bail. During the raid, DEA agents confiscated approximately $1.4 million worth of cocaine along with several tiny automatic weapons from the rodents’ cages.

Neurology Ph.D student Michael Splinter said the purpose of the research was to chronicle the long-term effects of the drug on the rat community in order to better understand the psychology behind drug abuse.

“When we first introduced cocaine into the sample group, we immediately noticed a dramatic change in the sleeping patterns of the rats. They were up at all hours of the night and began obsessively cleaning their cages — no longer content with feces-ridden squalor of their habitat,” Splinter said.

According to Splinter, before long, the rats were “living large,” using pieces of coffee stirrers to inhale the expensive stimulant off of each other’s fur at all-night dance parties.

“We became concerned when the rats began neglecting their cheese and instead focusing their energy on throwing wild parties, to which we were never invited,” Splinter said. “These rats thought they were on top of the world.”

However, as funding for the study began to dwindle due to budget constraints, the subjects’ cocaine supply could no longer meet the needs of their extravagant lifestyles. Rats began to turn to desperate measures to secure their drug fix.

“We had rats turning to prostitution; rats were organizing gangs and violently taking down rivals for control of the supply. There was nothing we could do to stop it because of the enormous power these gangs held in the lab,” Splinter said, “Incidents of gang-related violence and kidnappings rose to an all-time high within the cages.”

Lab Rat Union attorney Willard Stiles, who will be representing the rats in court, questioned whether the rats were really to blame for the rampant drug problem in their enclosures.

According to Stiles, the researchers supplying the rats with cocaine were the root cause of the problem.

“The scientists behind the study are the real culprits,” Stiles said. “They are destroying the livelihood of these rats and damaging the very foundations of the rat community. Drug abuse is one of the biggest issues facing the species today — on par with the bubonic plague and basic hygiene.”

DEA agent John Hark, who is leading the investigation, said the raid was a major success for the enforcement agency.

“We were first tipped off about the extensive drug operation in the psychology department by the press release on the UCSB website detailing the research,” Hark said. “After months of thorough investigation, we were finally able to gather enough evidence to make a move. The contained nature of the suspects’ cages made them easier to pursue and our agents had no trouble apprehending the subjects.”

A version of this article appeared in the Daily Nexus print edition on April 2, 2012

I discovered your Rodent Community Faces Debilitating Drug Bust | The Daily Nexus page and noticed you could have a lot more visitors. I have found that the key to running a popular website is making sure the visitors you are getting are interested in your niche. There is a company that you can get visitors from and they let you try their service for free. I managed to get over 300 targeted visitors to day to my site. Check it out here: http://qrmas.info/k