Elizabeth Quinn-Jensen, a graduate student and researcher in UC Santa Barbara’s Department of Psychological & Brain Sciences, and her colleagues — Allison Skinner-Dorkenoo from the University of Georgia and James Wages from Northwestern University — recently published a paper exploring how strong feelings of disgust toward gay males may predict increased blame in homicide cases, particularly in the United States.

Quinn-Jensen said that her interest in the subject and the idea for the research study came about while she was a senior in undergraduate studies at Northwestern University and learned that there was a tendency for gay men to be disproportionately blamed for crimes committed against them.

“There was this whole legal defense, the ‘gay panic defense,’ which isn’t legal in all states now … but it is in some, in which basically a defendant can claim that they were so overcome by emotion when another male hit on them, either in a romantic or a social sense, that they became so overwhelmed that they lost control,” Quinn-Jensen said.

Upon her discovery of this, Quinn-Jensen conducted additional research on the topic. Previous evidence showed that people tend to have feelings of disgust toward gay men, which can manifest in increased levels of prejudice and violence. In fact, according to the U.S. Department of Justice, almost ten percent of the hate crimes reported in 2017 were directed toward gay men.

“I wondered if it was possible that these feelings of disgust [toward gay men] … could potentially be why [people] are more likely to blame gay men when there is a crime committed against them,” Quinn-Jensen said.

The paper, initially published in January 2021 and comprising two studies, looked at two different types of disgust. The first study revealed peoples’ implicit biases and feelings of disgust specifically toward gay men; the second discussed unconscious associations between disgusting images and gay versus straight men, as well as general feelings of disgust unrelated to gay men, and whether these feelings could also increase likelihoods of victim blaming.

In the first study, participants — heterosexual men and women — completed an Implicit Association Test (IAT), which involved pairing images of disgust with images of heterosexual and homosexual couples. Participants then read a case scenario modeled on a real defense. In the scenario, a friendly conversation at a bar occurred between two males, where the victim made a romantic pass at the defendant, resulting in the defendant beating the victim to death. Participants were also asked how likely they were to think that this was a hate crime, meaning that the defendant was motivated by his hatred for gay men. 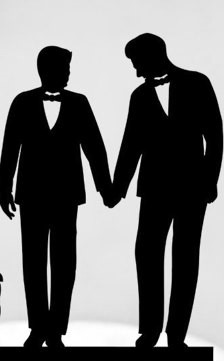 One of the images used for the IAT to denote gay male couples. These images were then either shown with words denoting disgust (e.g., gross, nasty, nauseating) and pleasure (e.g., appealing, satisfying, delightful.) (Courtesy of Elizabeth Quinn-Jensen)

In the second study, participants looked at unrelated images meant to elicit disgust, such as that of a dirty toilet, while other participants in a controlled setting looked at images of non-disgust eliciting objects, such as paper and staplers. The participants then took the same IAT, completed a measure of victim blame and answered whether they thought the gay man was the victim of a hate crime.

Quinn-Jensen and her colleagues found that participants who had been exposed to more disgust-eliciting images, regardless of their relation to gay men, were more likely to victim blame and less likely to apply the hate-crime statute. Additionally, the study showed that participants that were exposed to generally disgusting images (i.e. the dirty toilet) were also then more disgusted by gay men and more likely to blame them as the victim. 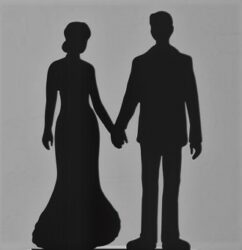 One of the images used for the IAT to denote gay male couples. (Courtesy of Elizabeth Quinn-Jensen)

Although her research focused on homicide cases, Quinn-Jensen said that peoples’ implicit stereotypes and unconscious biases can still to some extent play a role in their attitudes towards victims of any crime.

“Human beings aren’t totally irrational,” she said. “If a gay man [gets] mugged, for example … I don’t think even people who have these implicit disgust associations would be like, ‘Well, they shouldn’t [have been] walking around with their wallet.’”

Nevertheless, the study did find that peoples’ emotions have real world implications for defendants and victims. Regarding whether these unconscious biases may leak into the legal system, Quinn-Jensen said that while it is hard to tell in many cases due to those involved not being aware of or wanting to admit to being influenced by their emotions, there is lots of research saying that emotions in general, even unconscious ones, do influence judgements and legal decision-making.

For example, Quinn-Jensen referenced a past study which showed that if jurors and/or the judge are exposed to more disgusting stimuli, they are more predisposed to give the defendant a harsher sentence. It should be noted, however, that Quinn-Jensen and the other authors are not necessarily advocating for the removal of all disgust-eliciting media from courtrooms.

“It’s not possible to eliminate all disgust elicitors in a courtroom,” Quinn-Jensen said. “I think they’re important for evidentiary purposes, but I think there are also things that we can do to counteract the emotional effects they have on jury decision-making.”

Homosexual men, specifically, have borne the brunt of public disdain for centuries, despite the many breakthroughs in gay rights over the last few decades. Quinn-Jensen said that there are many factors that can affect our implicit biases and beliefs. Moral or religious opinions often play a large role but, interestingly, so can our biological instincts regarding perceived danger of disease, sometimes leading to disgust reactions.

In fact, similar to what the team’s study found, this country has seen feelings of disgust towards and subsequent dehumanization of gay men before, with the AIDS crisis in the 1980s. The stigma still stands even now: some people still think homosexual relationships are morally wrong, while others may still be responding to that initial fear of disease. Quinn-Jensen said that more strong prejudices are typically seen when looking at heterosexual men endorsing strong masculinity norms.

Additionally, in the wake of the “Me Too” movement, as well as with the increasing popularization of “cancel culture,” the concept of “victim blaming” has appeared frequently in recent news. Asked about a possible double standard for women and men, or even heterosexual and homosexual victims regarding victim blaming, Quinn-Jensen acknowledged that people belonging to stigmatized groups — like gay men, sex workers or houseless people — are generally blamed more in cases of violent crimes.

“There is no ‘straight panic defense,’” Quinn-Jensen said.

Because of the stigma around homosexuality, she argues that people are more willing to take the gay panic defense as reasonable than they might be for a similar argument from a woman or gay man.

“Human beings like to use emotion as information, and we sometimes treat it like unbiased information,” she added.  “While it’s good to have our emotional reactions, and sometimes they may be valid … we can’t always trust these emotions as ‘important information’ about what’s going on.”

Quinn-Jensen hopes that, after reading the paper, people will be more aware of their own implicit biases and how things in their environment can affect their emotions, which can in turn affect their decisions, with potentially real world, legal implications. While making important decisions and judgements, especially about stigmatized groups, Quinn-Jensen urges readers to be aware of how their emotions are affecting them.

“Everyone has implicit biases, but [with increased awareness] you can correct for them.”

Liz Quinn-Jensen recommends those interested in learning more about the topics of implicit bias, disgust responses and their connections to violence against gay men, and/or the role of emotion in the court-room, to check out these additional papers:

A version of this article appeared on p.7 of the January 19, 2023 print edition of the Daily Nexus.