UC Santa Barbara men’s basketball visited CSU Bakersfield for conference play on Jan. 11. Not only did the Gauchos strike first, but they also secured the win with 60-48 to stay undefeated in conference play. 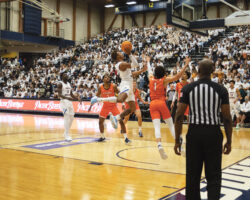 Ajare Sanni first got the Gauchos on the board by knocking down a 3-point jump shot. The Roadrunners would not go without a fight as they went point-to-point with the Gauchos. The score was tied 11-11 with 12 minutes left in the first half.

The Gauchos proceeded to go on a 16-4 run, making the score 27-15 with five minutes left in the first half. Shots from Sanni and Ajay Mitchell continued to fall to put all the momentum on Gaucho’s side.

However, costly mistakes from UC Santa Barbara reversed the momentum in favor of the Roadrunners. The Gauchos got a little sloppy at the end of the half where they were turning the ball over and missing some good looks. Going into the locker room, however, the Gauchos would still lead at 33-26.

At the half, Sanni and Mitchell were both 100 percent from the field as they combined for 14 points, with Sanni leading the team at 8 points.

Coming into the second half, it was evident that UCSB did not want to give Cal State Bakersfield any hope. The Gauchos continued to push the ball up and continuously found ways to get excellent looks to score.

Points from Koat Keat Tong, Miles Norris, Andre Kelly and Josh Pierre-Louis helped solidify the lead for the Gauchos, as the score was 46-35 with 11 minutes left of the game.

As the time continued to wind down, UC Santa Barbara’s defense was no match for the Roadrunners as the Gauchos forced them to take tough shots and rarely allowed any second-chance points.

Defense was shown to win games as the Gauchos had the Roadrunners shooting 35 percent from the field, securing their ninth win in a row with a score of 60-48.

Norris and Sanni were the only Gauchos in double digits for points. Norris had a team-leading 14, while Sanni had 10.

Tong showed out on the road by putting up his new career high in points at 8 while shooting 67 percent. Tong would also lead the team in rebounds at 7 and go 100 percent from the free throw line.

The Gauchos look to head home as they play the UC Riverside Highlanders on Jan. 14. Tipoff is set to be at 7 p.m. in the Thunderdome, where the game will be live-streamed on ESPN+.