The Daily Nexus
Sports
UCSB baseball alumni looks to make his MLB debut
November 27, 2022 at 10:48 am by Isaiah Ochoa 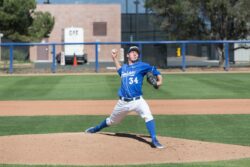 Before Davis’ first season as Gaucho in 2015-16, he was named the Preseason Big West Freshman of the Year by Perfect Game.

Davis was the No. 2 starter in his first year behind pitcher Shane Bieber. Being the No. 2, Davis made 15 starts and a pair of relief appearances, finishing with a 4.46 ERA with over 82 2/3 innings pitched. In those 82 innings, he racked up 63 strikeouts against 30 walks.

Going into Davis’ sophomore year, he was listed as the No. 107 starting pitcher in the country in D1Baseball’s positional power rankings. That wasn’t the only ranking system he would be placed in: Davis was named the No. 70 overall pitching prospect and No. 14 right-handed pitching prospect for the 2018 MLB Draft by D1Baseball.

Davis, UCSB’s Friday starter, went 7-4 with a 4.63 ERA with over 13 starts. Davis threw over 81 2/3 innings while striking out 65 against 22 walks. Davis then proceeded to go to the Cape Cod Baseball League in the summer.

In the Cape Cod Baseball League, Davis played for the Cotuit Kettleers. While there, he made five appearances with 4 starts. Davis pitched 16 innings with a 2.81 ERA, striking out 12 against 7 walks.

A successful summer added another accomplishment to the trophy case for Davis. In the prestigious summer league, Davis earned the No. 23 prospect in the Cape Cod League by D1Baseball.

For the 2018 season, Davis was named the ace again with similar prospect rankings as the previous year. D1Baseball named Davis the No. 53 college prospect for the 2018 draft. D1Baseball also listed him as the No. 63 starting pitcher in the positional power rankings.

Unfortunately for Davis, his junior season was cut short due to injury. On March 19, 2018, it was reported that Davis would likely miss the rest of the season with a partial ulnar collateral ligament tear.

At the time, the team was hopeful that Davis would rehab the tear and return at the year’s end. However, all hope was lost when he missed the rest of the season from the injury.

Later that year, Davis was drafted by the Cincinnati Reds as the 319th overall pick. Davis spent three seasons with the Reds’ rookie minor league team before being traded to the Colorado Rockies.

Davis was Class High-A in the Rockies minor league system for two seasons. In his second season with the Rockies, he was promoted to Class AA for 26 games.

On Sept. 16, 2022, Davis was called to the MLB for the Colorado Rockies. Davis has not made his MLB debut, but he will be available as a multi-inning option out of the Rockies’ bullpen.