The UC Santa Barbara women’s home opener on Nov. 10 was one to remember. The Gauchos improved to 2-0 as they fought off the Pepperdine University Waves, who are now 0-2. UCSB won 71-63 behind an early first half run and late rally to put a hold on Pepperdine’s shot at a second half comeback. 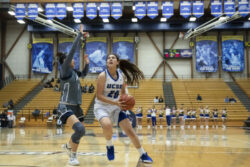 In the first half of the game, it was all UCSB. The Gauchos got off to a hot start, out scoring the Waves 15-7 in the opening quarter. Behind the contributions of six different Gauchos, UCSB was able to move the ball around to find open looks.

The first quarter was controlled by senior center Ila Lane who contributed to more than a third of the scoring, going 2-for-2 from the field. Freshman guard Jessica Grant contributed with a 3-pointer. Junior guard Alyssa Marin and sophomore point guard Callie Cooper dished out assists as they assisted on 5 of their first 6 field goals.

With UCSB leading in the first quarter, it was noticeable they weren’t willing to give up any momentum to the Waves. The Gauchos only allowed 10 points in the second quarter to make the score 38-17 in favor of UCSB.

Pepperdine came out in the second half with major defensive adjustments. The Waves not only chipped at the Gauchos lead but also forced UCSB to make some mistakes.

UCSB was forced into 9 turnovers while only scoring 13 points in the third quarter. Pepperdine’s 27 points in the third quarter cut the lead to 51-44 in favor of the Gauchos. As the Waves were inching closer in the fourth quarter the Gauchos did not let up. Alexis Tucker and Alyssa Marin each scored 5 points leading a late game rally. Lane and Grant followed up their teammates by scoring a combined 8 points.

With the scoring pouring on the Gauchos scored 20 points in the quarter. At the end of the fourth quarter, the Gauchos ended the game 71-63.

Lane continued to stay on fire from the home opener by dropping 16 points shooting 8-9 from the field, while recording 6 rebounds.

Grant, Mole, and Lane all finished in double figures on an efficient night. The three players combined for 40 points with a shooting percentage of 76%.

The Gauchos now look on to their next game on Nov. 15, where they will host Idaho State University, with tip-off set for 7 p.m.

My Companion mother makes 108 bucks an hour on the PC(Personal PC). She has been out of w0rk for quite some time however last month her check was 15,265 bucks only w0rking on the PC(Personal PC) for 9 hours per day.
…
For more detail visit this article——————————->>> https://easyhomeincome2.pages.dev