The Daily Nexus
UCSB
To fund or not to fund: UCSB’s competitive research environment
November 17, 2022 at 1:01 pm by Shannon Rumsey, Jessica Crum and John-Michael Kirchner

Based on the Data Team’s analysis of department funding, over $200 million are allocated to UC Santa Barbara research projects every year. The Daily Nexus Data Team analyzed research funding and discovered a skewed distribution among academic departments at UCSB.

Funding plays a crucial role in research and can be what determines whether or not a project moves forward in development. In order to acquire funding, individual departments must write a funding proposal that describes the purpose of its research, identifies potential sponsors and states the desired amount of funding, which is reviewed by either the UCSB Sponsored Project Office or the sponsor of the research grant.

UCSB’s research funding statistics are categorized by either the home department, which is the department receiving the funds or the administrative department, which is the department the project’s Principal Investigator belongs to.The Principal Investigator is the person in charge of ensuring the allocated funds are spent properly. For the purposes of this article, analysis was based primarily on the administrative department because it better reflects how individual departments utilize funding. Departments receiving no funding were not included in this analysis because many departments receive no research funding in a given year; thus, including the unfunded departments would skew the distribution.

According to UCSB’s Office of Research, the largest source of research funding UCSB receives is from federal sources such as National Aeronautics and Space Administration (NASA), the U.S. Department of Energy and the National Institute of Health.

When analyzing funding that departments receive, it is important to acknowledge that when applying for research funding, departments can, at times, only receive funding from sources that relate to their research.

NASA, for example, provided $5.7 million to UCSB research projects in 2021-22, but only funded proposals that correlated with their initiatives, according to the Guidebook for Proposers Responding to a NASA Funding Announcement. Research projects that are eligible to receive funding must fall into the Science, Human Exploration and Operations, Aeronautics Research and Space Technology categories. This proves to be an occasional barrier when seeking funding as some major sources are primarily allocated toward specific research endeavors.

Organized Research Units, which are home to interdisciplinary centers such as the Center for Evolutionary Psychology and the Ocean and Coastal Policy Center, provide the opportunity for research to operate outside of the established academic teaching departments at UCSB. They consistently received the most funding of all Colleges since 2016. 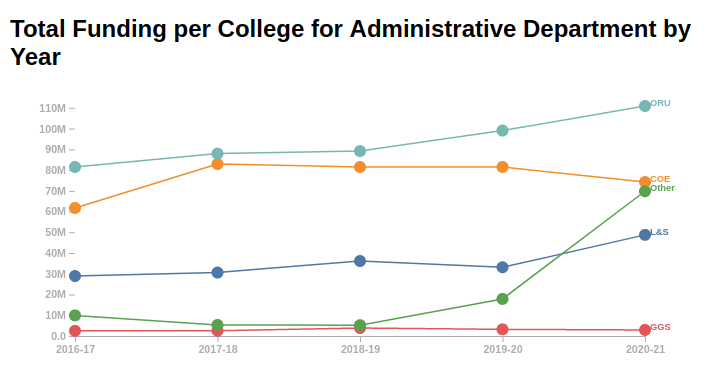 The “Other” department, shown as the green line in the Total Funding per College for Administrative Department by Year chart, responsible for student resources such as the Student Health Service and UCSB Library, saw a significant increase in funding from 2019-21 as a result of needing to procure additional resources to respond to the COVID-19 pandemic in which Congress passed the CARES Act in part to provide funds to universities to support campus operations during the pandemic, according to the Higher Education Emergency Relief Fund quarterly report.

It is important to note that these additional funds did not prevent potential funding for other projects or take funding from other departments. 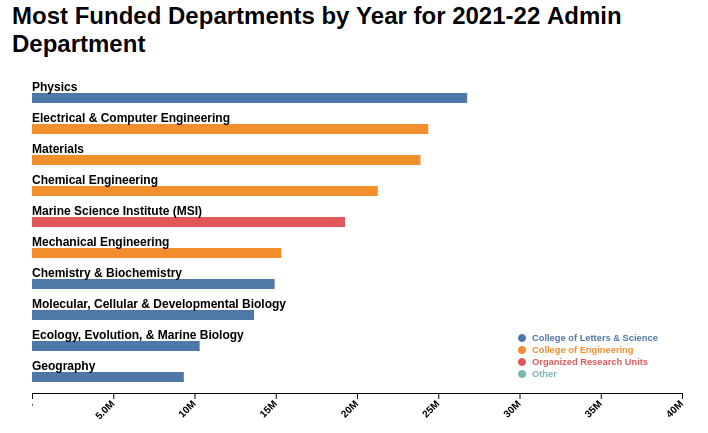 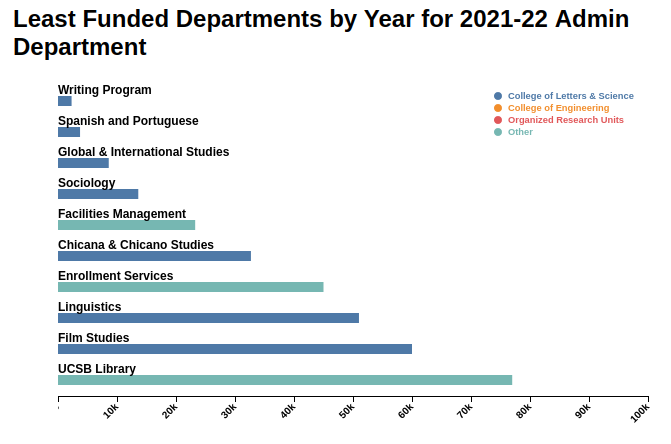 On average, the College of Engineering, which comprises only five undergraduate majors, received a total of about 33% of all research funding available for the fiscal years of 2017-22. The physics department alone received approximately 6% of funding available in the last five years. It is also interesting to note that of the six Nobel Prizes awarded to faculty and alumni associated with UCSB, five are in the College of Engineering or the physics department.

Claudio Campagnari, professor and department chair for the physics department, said that physics faculty members, either individually or in collaboration, apply for funding and are generally successful. The Electrical and Computer Engineering, Spanish and Portuguese, Economics and Communications departments did not respond to requests for comment.

“There are no barriers to gaining research funding, except that the total amount of funding available in the United States is not infinite, and it is a very competitive environment,” Campagnari said in an email statement.