The Daily Nexus
Events
Delirium 2022: Isaiah Rashad and Binki electrify the Thunderdome
November 3, 2022 at 8:00 am by Marisol Cruz and Adam Majcher 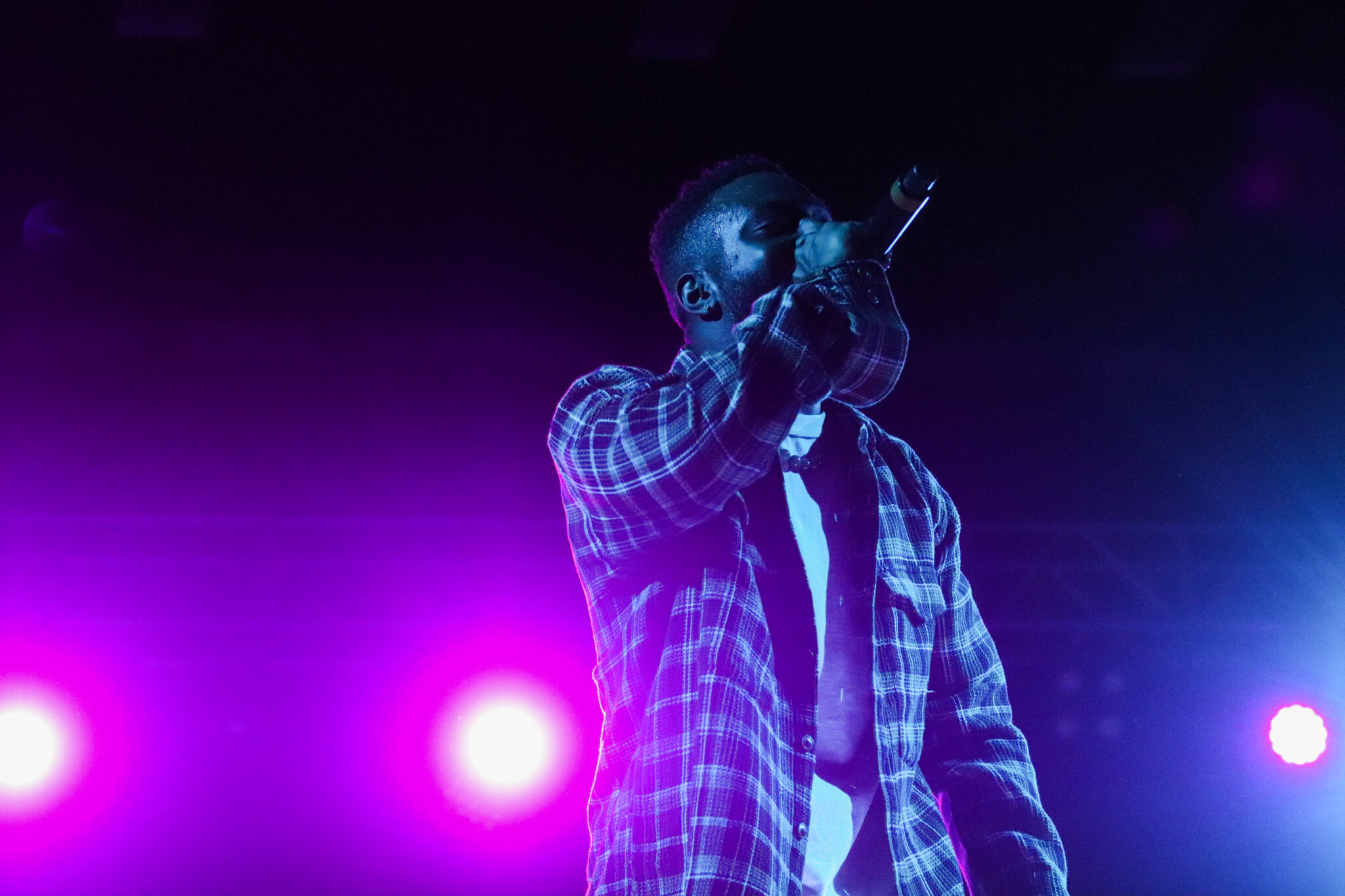 On Oct. 29, the Associated Students Program Board hosted its annual Halloween weekend concert, Delirium, at the Thunderdome. Open only to UC Santa Barbara students, the concert was headlined by Top Dawg Entertainment rapper Isaish Rashad and indie-disco artist Binki.

Set to start at 8 p.m., concert-goers were antsy for the concert to start as many eagerly awaited for the headliners to perform. At around 9:15 p.m., Associated Students (A.S.) Program Board special events coordinator Wally Corngold arrived on stage. The crowd clamored for the show to start, and Corngold kicked off the concert by announcing genre-bending artist Binki.

Binki stumbled onto the stage just as the synthy dance track beats of his song “Revolve” off his 2021 EP “Motor Function” began playing. As the Pennsylvania artist repeated the chorus — “Cause you’re just like me” — the entire Thunderdome filled with the tune as the crowd quickly warmed up to his catchy combination of sounds. 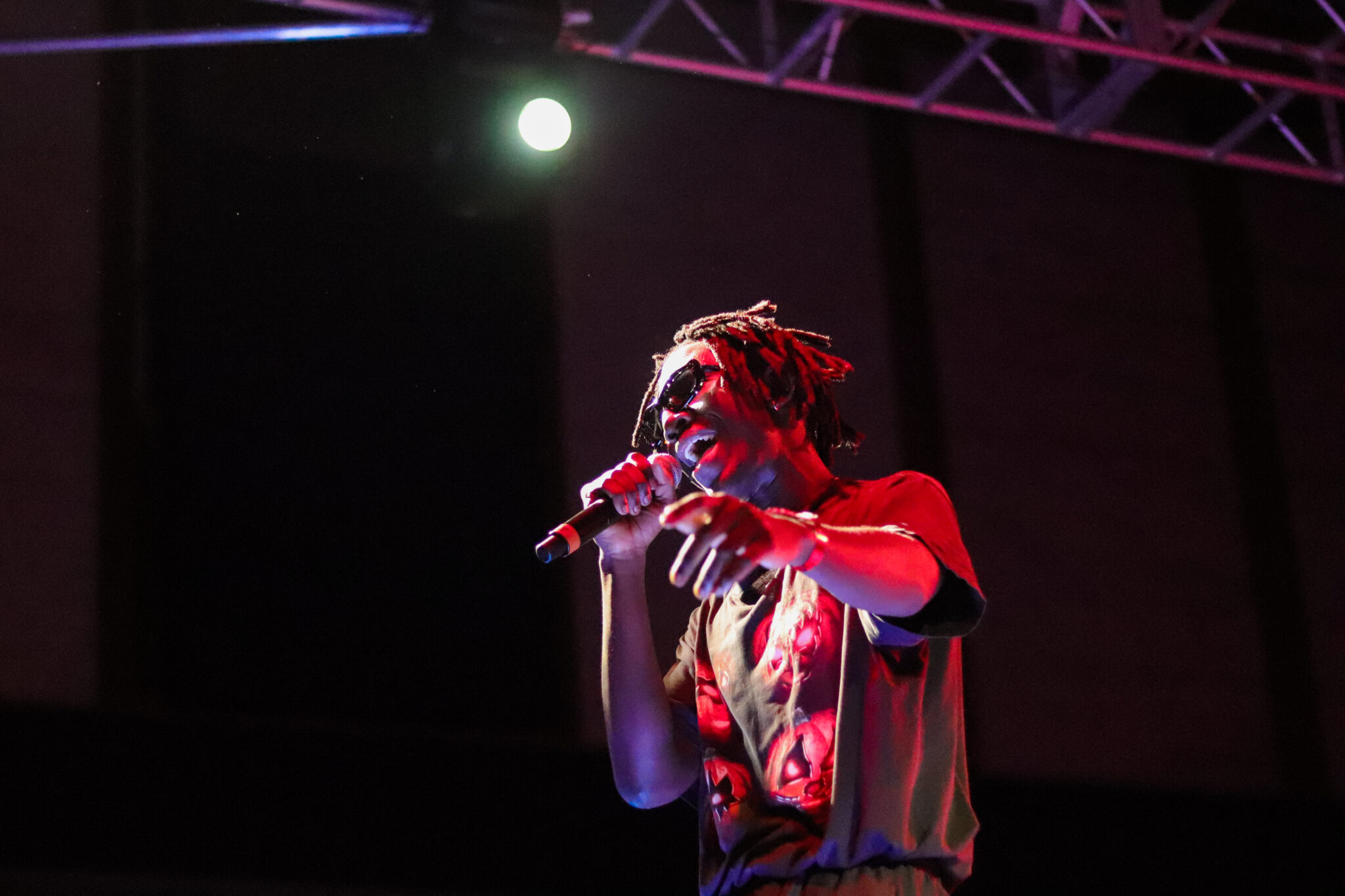 After performing his first song, the artist asked if there were any drama students in the crowd. A lackluster cheer made him laugh, and he shared with the concert-goers that when he was in university, he studied theater.

The artist jumped into his next track, “Sea Sick,” a catchy track that got the crowd singing along to the chorus, “You could be my sunshine even when it’s grey.” While some of the crowd hadn’t heard of Binki’s music — the artist has a handful of singles and one EP under his belt — his music got the crowd grooving.

Binki seemed incredibly comfortable on the stage, constantly roaming across and even joking that the “Thunderdome” sounded like a name for a WWE arena.

Then, Binki went to his DJ to grab a guitar, and began strumming the chords to The Cranberries’ 1993 song “Linger.” As Binki started singing the laid-back, alternative-rock song, crowd members brought out their cell phones to shine lights and sway to the music.

Toward the end of his setlist, Binki must’ve felt the energy from the crowd (and perhaps from a few fan screams) as he took his shirt off for his final two songs.

One of the final songs Binki performed was his 2019 single “Heybb!,” an indie-dance track that got the crowd vibing. Soon after, Binki exited the stage as the crowd chanted his name, certainly scoring more than a few fans by the time the stage began getting prepared for the night’s headliner. 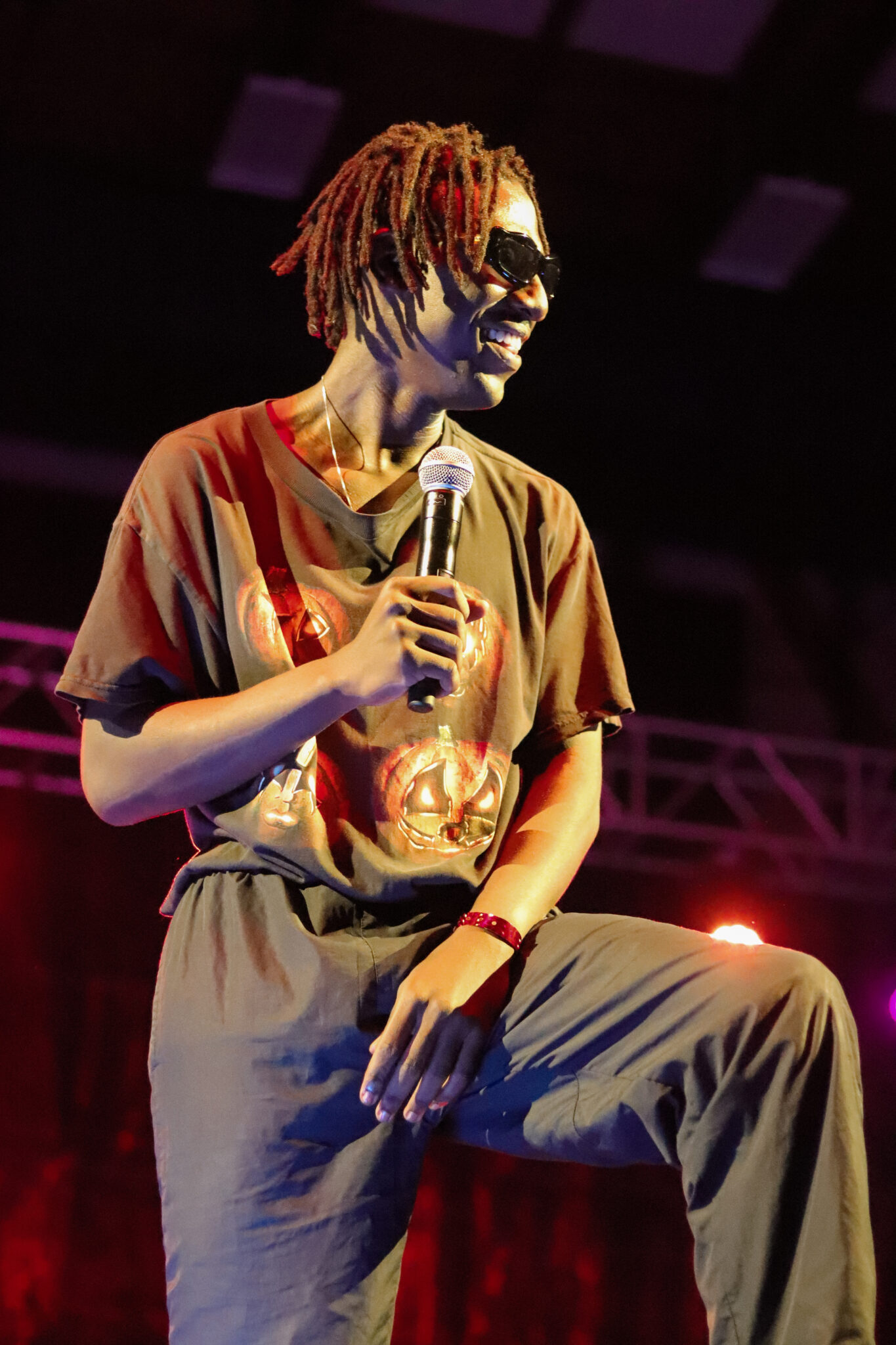 Shortly after 10 p.m., Rashad’s DJ arrived on stage, generating excitement among the crowd. As Baby Keem’s “trademark usa” started blaring from the speakers, the crowd was full of energy and shouting lyrics.

Rashad then entered the stage with a bang, getting the crowd to jump just a few seconds into the first track, “RIP Young,” before following it up with the equally explosive “Hey Mista.”

While these tracks, like most from his recent album, 2021’s “The House Is Burning,” sound more chill and laid-back in their studio versions, Rashad noticeably changed his delivery to a far more aggressive, energetic flow live. This certainly went over well with the crowd as nearly everyone was off their feet as he yelled out the second verse of “Hey Mista,” “Top of the generation / Too cool for complications.” 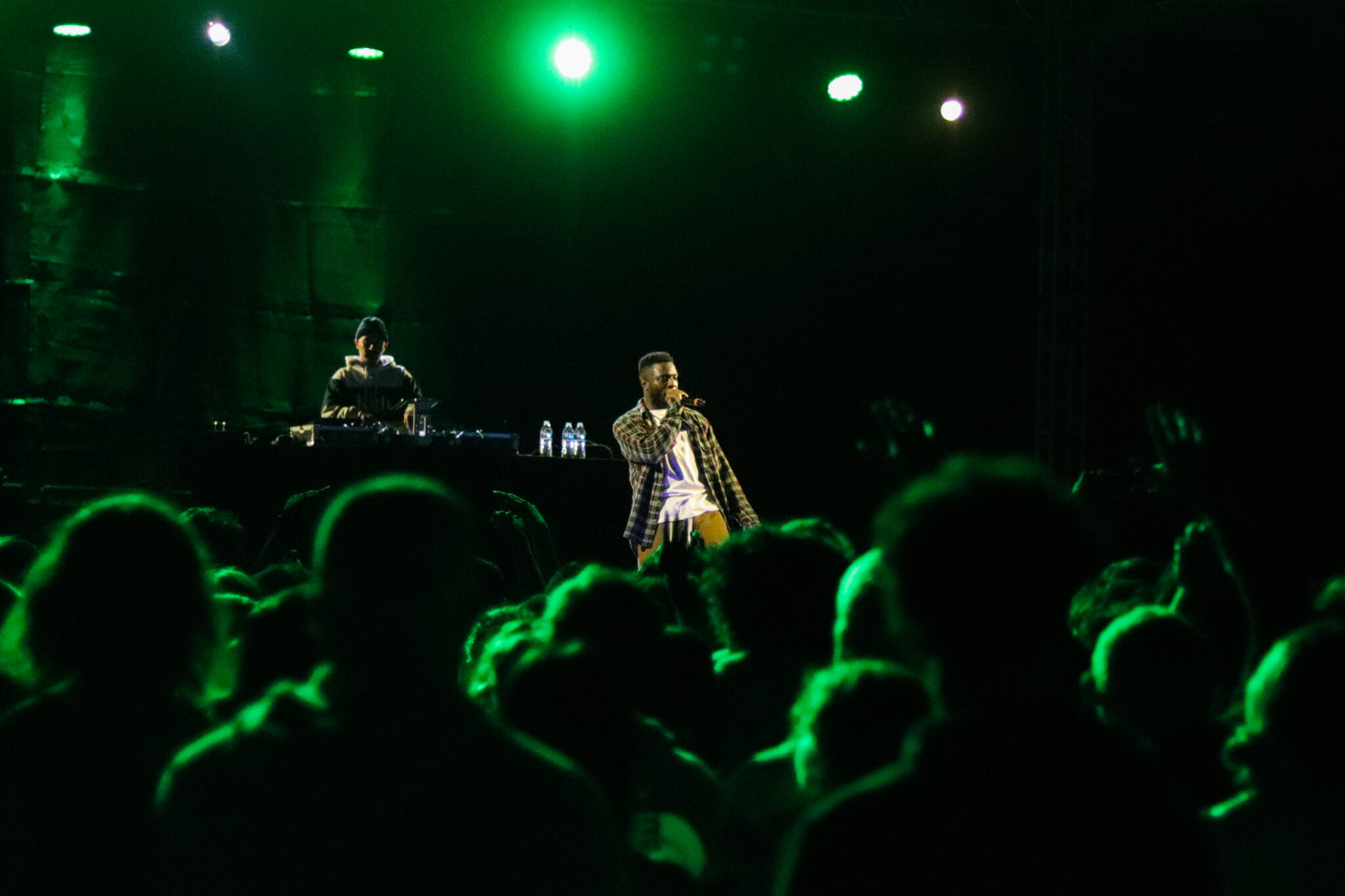 Rashad also took a few moments throughout his setlist to deliver some beautiful melodic verses on many of his songs, like “Silkk da Shocka” and “4r Da Squaw,” providing a satisfying respite from surrounding hard-hitters to let the crowd catch their breath. Although these moments were more intimate, they seemed to hit the hardest as you could tell the Tennessee rapper was really pouring his heart out under the dimmed lights, repeating “So holla unless you’re usin’ narcotics / See, I don’t wanna be here if I don’t gotta / My weed habit so close to snortin’ powder” from “Silkk da Shocka.”

Rashad was responsive to the crowd, and after fans shouted for the rapper to perform “From the Garden,” the trumpets at the opening of the heaving-hitting track began blaring from the speakers. Fans cheered and the crowd began moshing to the infectious beat.

Another high-energy song Rashad performed was “Lay Wit Ya.” The intense beat, sampled from Three 6 Mafia’s “Ridin’ N’ Da Chevy,” got the crowd jumping. Mosh pits began to form again, and some concert-goers even broke out into dance in the middle of them. 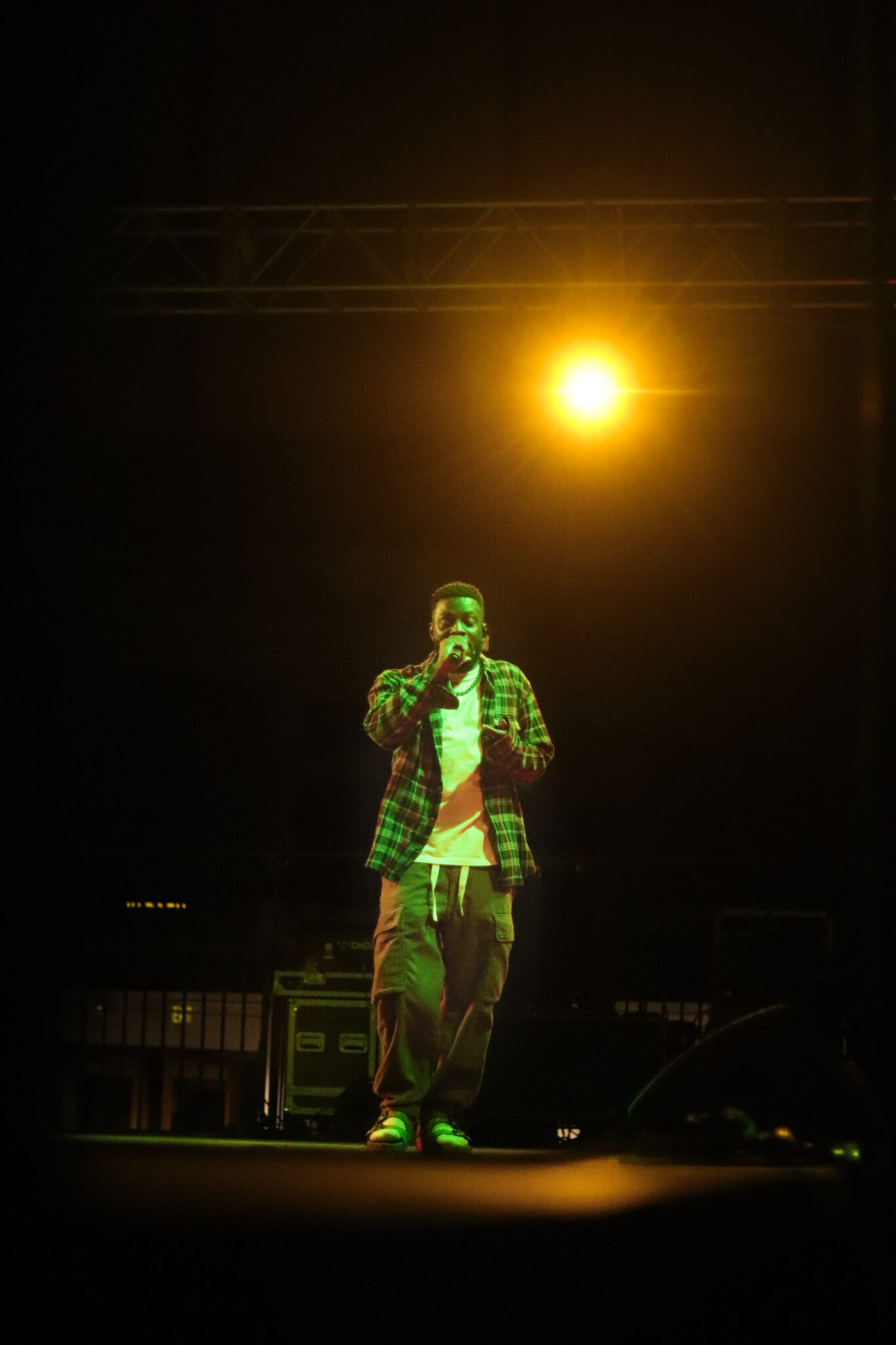 The rhythmic track explores intimate issues as Rashad sings  “Now, I’m prayin’ that I make it twenty-five / Baby call a doctor for my health / And “no” is kinda hard to say to drugs / ‘Cause I been havin’ problems with myself / And I been askin’ questions, where the love? / And they don’t give me answers, just a check.”

Rashad’s closing track of the night, “Headshots (4r Da Locals),” is one of the most popular songs off his most recent album and fans instantly recognized the “smooth like a R&B song” track. The crowd sang along to the chorus, “Okay, you caught me by surprise in my brand new whip, baby / Peep me in the scope, if I’m gone, don’t trip, baby / Bringin’ back the strong, up to bat, all hits, baby.”

After performing his final track of the set, Rashad got off the stage and went to the barricade. Concert-goers were screaming as Rashad interacted with the crowd as former fellow Top Dawg Entertainment signee Kendrick Lamar’s “m.A.A.d city” blasted from the speakers.

The night came to a close, and people made their way out of the Thunderdome after an electrifying and energizing night with stellar performances from the anticipated Pennsylvania artists.