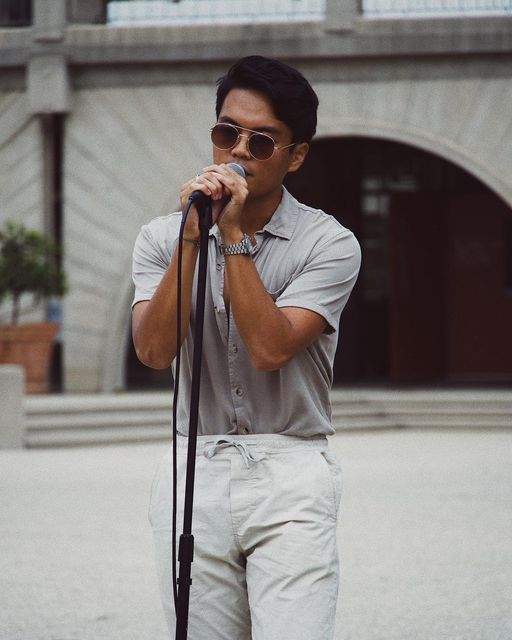 As the campanile behind him struck 12, jomch took the stage just a couple feet away from the stairs where his crew had set up, his friends cheering him on. Before he launched into his first song, he remarked, “If you think this song is about you, make no mistake, it is,” a fittingly saccharine introduction to his song “letter to my future love.”

Drawn by the bluesy chords and jomch’s crooning voice, people began to meander their way over to the plaza, standing around the top of the stairs or settling on the steps. jomch gave a shout-out to the new arrivals as he introduced his next song, “Impatient,” which he characterized as a narrative about trying to get through a breakup too soon.

jomch — who has only been releasing music since March 2022 — has been singing since he was born. However, he only decided to start performing after meeting musicians in I.V. that inspired him to produce music professionally.

“Being in I.V. and UCSB means a lot to me; I wouldn’t be doing this stuff if I wasn’t here,” confessed jomch. He also gave credit to his Filipino background, mentioning that “music is a huge part of [his] culture.” He added that he wants to “implement more of [his] Filipino heritage” into his aesthetic as he develops his brand during this early stage of his musical career. He also takes special joy in performing for his family and said that “they have no idea how this is all happening.”

Though jomch remained humble about his quick rise in the local scene and gave frequent shout-outs to the producers and collaborators featured in his music, he also gave insight into how hard he’s working to build an audience. With his “heart been broken too many times,” jomch directs his drive into his music and his creative vision. He also mentioned that he takes advantage of the “viable opportunity” that social media has to offer, noting that because he is able to record and edit this performance, he is “not only performing here, but also for everyone on social media as well.”

“I just gotta focus on my music, focus on my school,” he said. “I’m constantly working on new projects with different people and by myself.”

Citing his love for karaoke, jomch covered songs like “Honesty” by Pink Sweat$ and “Japanese Denim” by Daniel Caesar in his setlist. He described himself as someone who loves “cute, sweet songs,” which showed in his performance of the first song he wrote and produced by himself, “say it first,” which pays homage to the “feeling of saying ‘I love you’ for the first time in your life.”

As a growing crowd formed around Storke Plaza, jomch performed his newest single, “letter to my future love” again, explaining how the song was born from the question, “If you could write a letter to the next person you would fall in love with, what would you say?” He also sang an emotional cover of “Heartbreak Anniversary” by Giveon and a couple more of his original songs, “Midnight Blues” and “someone new.”

jomch closed out the concert with “see you soon,” a touching tribute to the brighter side of “telling someone you miss them.” While the song is ostensibly about his past relationship, jomch remarked on how well the lyrics worked as the last song in his set.

“Thanks for letting me be myself / See you soon we’re not done yet,” he sang to his audience, as people held up their arms and swayed to the music.

With his self-taught talent and exuberant work ethic, jomch is certainly “not done yet,” planning to flesh out his musical arsenal not only with fresh music but also new visuals, music videos and live performances. His music can be found on Apple Music, Spotify and “everywhere else music can be.”