The Daily Nexus
News
Olivia Craig for IVCSD Board of Directors
October 20, 2022 at 10:00 am by Daily Nexus Editorial Board

The Daily Nexus endorses Olivia Craig for the two-year seat on the Isla Vista Community Services District Board of Directors. 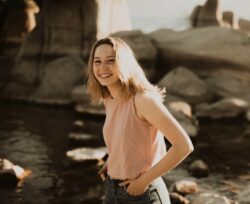 The Nexus believes that Craig — currently a second-year UC Santa Barbara student majoring in environmental studies — is passionate, well-informed and has the necessary, applicable experience to serve effectively in the position and voice the interests of the local student community.

Craig presented an impressive resume of previous government experience for her age and a set of campaign platform points centering around three critical issues: the local housing crisis, parking and transportation, and police presence in Isla Vista. These goals are timely, attainable and fit well into the Isla Vista Community Service District’s (IVCSD) overarching agenda, given the district’s history of work related to those very issues.

Craig’s opponent is Henry Sarria, a longtime resident of Isla Vista with a history of involvement in local government. While the Nexus believes Craig is the better candidate for the role, we recognize that both individuals would bring unique perspectives and good ideas to the board if elected.

The Nexus believes that though Sarria offered several well thought-out ideas on a range of issues — from lighting and recycling to community policing — his policy proposals often reflected a fixation on seemingly low-impact issues, failing to encapsulate the pressing concerns of local residents.

In contrast, the Nexus found Craig’s platform to have a wider general appeal and stronger potential to broadly and positively affect her constituency.

They demonstrated a thorough knowledge of the work of IVCSD, including its major programs, services and budgeting, and if elected, would be the only person on the board representing the student community, a key constituency in an area predominantly populated by students.

“Being able to be an advocate, especially for the student voice within Isla Vista, is something that I’m really excited about,” Craig said. “UCSB is not the whole population of Isla Vista, but it is a huge portion, and so I think that I can represent some of those views very well.”

Craig worked on sustainable transportation projects during her 2022 summer internship with the Tahoe Regional Planning Agency (TRPA); this expertise will translate well to work on IVCSD’s Community Mobility Plan — an ongoing initiative to develop and implement equity-based, sustainable transportation solutions. IVCSD is currently on track to finalize its Mobility Plan in spring 2023.

“As an environmental studies major and someone who worked for the TRPA over the summer, I recognize the role that transportation plays, and I also see what’s lacking in the Isla Vista community,” Craig said. “So I’d like to see better bus routes and micro-transit options and general input from the I.V. community so that it can work better for all of us.”

Craig listed the student housing issue as a priority for their term, and said they would seek publicly funded grants for housing projects rather than private investments.

“I’d like to see some solutions working with the university that could maybe be working through public funding instead of private grants, which is what we see with Munger Hall,” Craig said. “A lot of other UC and Cal State schools have been able to take advantage of these and work on housing projects that don’t have such a bad design.”

Craig also talked about police presence and their desire for community-led alternatives to policing.

“I’d like to see a switch in how the police are present in Isla Vista. I don’t think that they serve as a resource for most students,” Craig said. “I think that they are intimidating on nights out, and they’re there to get students in trouble, so I’d honestly like to see less police presence and hopefully we can utilize other community-safety solutions outside of the police.”

The Nexus believes that Craig’s perspective on policing strongly reflects that of the greater student population, which has steadily called for a decrease in policing in I.V. and on campus.

Sarria’s policing policy stands largely in line with the current status quo apart from a desire to decriminalize open container citations and work with I.V. Foot Patrol Community Resource Deputy Justin Schroeder to determine what should or should not be considered a crime.

“Deputy Justin Schroeder: he’s a classic, he’s a stand up individual and he’s really, really awesome with the community. He’s very approachable, and he is definitely willing to work with the CSD on a full basis,” Sarria said.

Craig said they would want to see the total “removal” of police in Isla Vista in an ideal scenario. Confronted by the fact that IVCSD does not have the direct power to reduce policing in Isla Vista, Craig said she would advocate against policing through discussions with local law enforcement agencies.

“I think even though we don’t directly have the pull to do that, communicating how we feel and just building a relationship with the police force so that hopefully we can adjust how they’re present in Isla Vista is something that we can do,” she said.

The Nexus holds minor reservations regarding Craig’s newcomer status to Isla Vista. As a student, they lived in on-campus housing for their freshman year before moving to Del Playa Drive, where they have since resided for around a month. Craig’s lack of time spent in the community itself is an unavoidable consequence of electing a student to the position.

While Craig appears sufficiently well-informed of local issues, she will have to make thorough, extended efforts to form connections with permanent residents. They have made strides in this area already, canvassing at the I.V. Community Center throughout her campaign to reach a diversity of community groups and receive feedback regarding her candidacy.

“I also fully recognize that UCSB is not all of I.V., and so I’m hoping to utilize Isla Vista Community Center throughout my campaign to get in touch with some of those groups that I don’t directly represent,” Craig said.

Her opponent, Sarria, has lived in Isla Vista for 35 years as a renter and showed a good grasp of the trends and patterns of the local community gained through his personal experience as a long-term resident.

Sarria, who immigrated to the U.S. from Cuba, would give representation to the Latinx community — a consistently underrepresented group in Isla Vista politics — if elected to the IVCSD board of directors.

“I bring [a perspective] where I have friends from all demographics of the community. I am Latino,” Sarria said.

Unfortunately, the Nexus felt that out of his policy proposals, few actually directly translated toward having a clear or substantial impact on the Latinx community. On the other hand, the Nexus believes that Craig’s policy focuses align with the priorities of students and would resonate with that community for which she seeks to serve as an advocate.

In addition, the Nexus has concerns regarding the feasibility of the projects Sarria proposed and whether or not they could be realistically accomplished within a two-year term. Since the IVCSD already approved its 2022-23 budget in August, the district may not have available financing to expend on Sarria’s projects until the next fiscal year.

Sarria acknowledged that many of the items he plans to pursue would come second to IVCSD’s existing goals, for which he stated his commitment to help achieve.

Additionally, Sarria proposed taking control of the bike abatement program from Santa Barbara County in order to auction off impounded bikes for additional revenue, and clear abandoned bikes that he said invites bike thieves and “bring a criminal element into Isla Vista.”

In lieu of adding more parking spaces in Isla Vista, Sarria suggested painting a yellow stripe across Isla Vistan’s driveways, and writing ‘good’ and ‘bad’ on either side to demarcate where residents are legally allowed to park.

During her campaign, Craig said she received mentorship from IVCSD Board Director and President Spencer Brandt, who is also up for reelection this year.

“Spencer has been awesome. He’s been a resource in informing me about IVCSD, giving me resources to do my own research, whether that be navigating what the budget looks like or going on the website and seeing how different programs are being executed within the community,” Craig said.

The Daily Nexus views this mentorship experience as an asset to her candidacy, offering her the opportunity and resources to acquaint herself with the inner workings of IVCSD. That said, the Nexus would not want Brandt’s early support of Craig to influence her actions as a director, and we hope to see her find an independent footing and her distinct voice.

“Spencer and I are different people and we’re going to have different views on certain things. I don’t see him always driving my views of every single issue in Isla Vista, but he’s been a resource for me, and he’s someone that I look up to,”she said.

While Sarria possesses community experiences and connections that Craig lacks, a bulk of his policy proposals only offered sentiments on issues rather than tangible solutions. No solid proposal was put forward for Sarria’s stated main goal of diminishing the barrier between the permanent residents and students, beyond working toward a “community that we’re proud of.”

The Nexus believes that Sarria’s long term residency in Isla Vista and ties to the local community do not outweigh the at-times questionable solutions he put forward, and finds Craig to be a more capable candidate with promising proposals that could greatly benefit the community.

The Nexus is excited to see the energy and insight Craig may bring to the board, along with her zeal for advocacy in directly representing the student population while forging relations with the greater Isla Vista community.

I think this isn’t really an internship or anything, so probably better to get have an adult.
She doesn’t even know about CHAZ when we saw what happens when there’s no police.