The UC Santa Barbara women’s soccer team has had a lackluster start to the October portion of their schedule in an already suboptimal season. In the three games they have played this month, the Gauchos have tied against CSU Bakersfield and UC San Diego and lost to UC Davis. With these three results, the record for the women’s soccer team, who only have a single victory in the last eight games, has fallen to 2-7-6. The Gauchos will need to fix their issues quickly if they want to match last year’s record of 8-9-3. 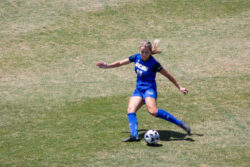 In their first game of the month, UCSB traveled to Bakersfield to take on the CSU Bakersfield Roadrunners. Only a single goal was scored in the first half, courtesy of UCSB sophomore midfielder/forward Krysten Vasquez. This was Vasquez’s first goal in her collegiate career. However, it would be the only goal the Gauchos scored in the match. In the second half, UCSB continued the pressure and was able to defend for large chunks of time. However, the Gauchos were unable to hold on, as they conceded a goal in the 75th minute to make the score 1-1. This score would hold until the final whistle, ending the game in a tie. Senior goalkeeper Evann Smith made three saves for the Gauchos in the 1-1 game.

Four days later, the UCSB women’s soccer team traveled back to Santa Barbara to take on another Big West rival — the UC San Diego Tritons. The Gauchos were committed to getting better offensive results, however, these efforts did not pay off. The Gauchos had 10 total shots in the game but were unable to capitalize on any of them, as they did not score for the entire game. Luckily for UCSB, their goalkeeper Smith was at the top of her game, saving every goal attempt that came her way. With both goalkeepers playing quality soccer, the match ended in a 0-0 draw.

In their most recent game, the Gauchos extended their two-game winless streak with a defeat to the UC Davis Aggies. The game was a defensive slugfest that saw a lot of physical play but not many goals. It was not until the 76th minute that the first goal of the match was scored. This goal, scored by UC Davis, would be the only one in the entire game, as UCSB lost by a score of 1-0. Although no goals were scored, Vasquez had the most offensive pressure for the Gauchos, contributing three shots, one of which was on goal.

In their next game of the season, the UCSB women’s soccer team will travel to Fullerton to take on the Cal State Fullerton Titans. This game will be held on Oct.13.

A version of this article appeared on p. 7 of the October 13, 2022 print edition of the Daily Nexus.