Crime rates across the University of California rose between 2008 and 2016. Each campus tells a different story — from UC Santa Barbara’s highest arrests in drunkenness to UC Los Angeles’ highest rates in Part I FBI crimes, the Nexus analyzed the data here.

The Nexus acquired crime records from the University of California Police Department (UCPD) Annual Report and Crime Statistics site. The UCPD recorded crime data for the years 2008-2016 across all UC campuses.

The FBI’s Uniform Crime Reporting (UCR) Handbook sets the definition of each crime and which crimes fall under Part I and Part II classifications. Part I crimes are considered to be more serious than Part II crimes. Part I crimes are categorized into violent crimes and property crimes. Violent crimes include homicide, manslaughter, rape, robbery and aggravated assault, while property crimes include burglary, larceny, motor vehicle theft and arson.

According to the “In this Report” section of the UCPD crime statistics website, if multiple crimes are committed at the same time, only the most serious crime would be reported. Nevertheless, arson was an exception — it is always reported since it “frequently occurs in conjunction with other crimes reported in the UCR system.”

The dataset has mathematical and classification errors, but they were not altered for the purposes of this article.

The universitywide totals provided by the UCPD for each year and each crime classification rarely match the sum of the individual totals of a particular crime committed at each campus. This pattern continues throughout most of the dataset. Accordingly, for the purposes of this article, the Nexus used only the individual totals to display and analyze the data.

Taking the population into account helps contextualize the information. For example, in the Stolen vs. Recovered Property bar chart, the Recovered Property Value includes raw numbers but also shows the proportional value of the data. Additionally, some schools have smaller counts of crime than other schools but also have smaller populations. For example, UC Berkeley and UC Los Angeles (UCLA) annually have more arrests than other UC campuses but also have larger campus populations. 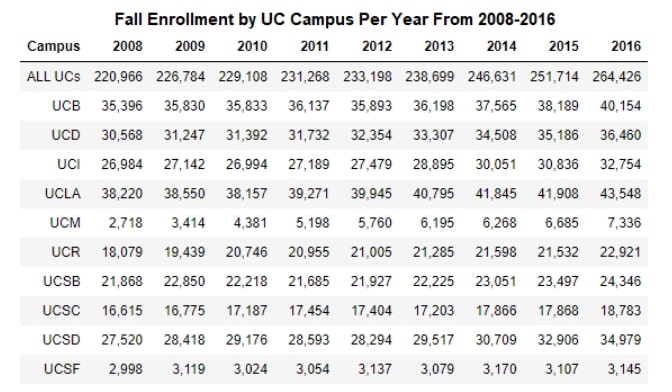 The population of each UC campus generally increased every year. UC Berkeley and UCLA had the highest population out of all UC campuses, while UC Merced and UC San Francisco had the lowest. While crimes committed by faculty or to faculty were also included in the crime counts, the majority of people arrested for crimes committed by the UC police departments were people not affiliated with a university, followed by students. Having more or less faculty was not associated with a higher or lower crime count.

Some population totals were present on the UCPD reports but not all were cited each year. In order to have a standardized metric to analyze the effect of population on crime totals, the Nexus used student population data from the UC Information Center. The totals are similar to the reported population data in each police statistic report.

UCPD provides a disclaimer stating that assessments of the crime data can only be valid if they consider the unique conditions and factors that impact each campus police departments’ jurisdictions.

“The reader is, therefore, cautioned against comparing statistical data of individual reporting units from cities, metropolitan areas or universities solely on the basis of their population coverage or student enrollment,” the disclaimer reads.

“We encourage the readers of the Annual Security & Fire Safety Report to use the information provided in this document as a guide for safe practices on and off campus,” Public Information Officer Sergeant Dan Wilson said in an email statement to the Nexus

UCSB has the highest Part II arrests of all UC campuses, with 999 arrests (92.33%) and 39 Part I arrests (3.60%). There were 302 arrests for drunkenness, which was the largest category under Part II, followed by liquor laws (271 arrests) as second largest and disorderly conduct (106 arrests) as third. Considering that UCSB has a much smaller population than UCLA and UC Berkeley, both the percentage and raw numbers are significantly high data points.

The UC campuses experienced significant difficulty clearing Part I crimes. With the exception of UC Merced, all campus police departments were unable to clear more than 20% of Part I crimes in a given year. UC Merced and UCLA regularly had the highest clearance rate among UC campuses, while UC Davis usually had the lowest.

Across most UC campuses, the difference in Part II crime totals in 2016 compared to 2008 stayed relatively small. However, many of the campuses experienced steep fluctuations in crime totals with low and high amounts ranging from approximately 300 to 1,000 crimes.

However, UCSB consistently had a higher percentage of Part II crimes cleared than other UC campuses. Its high of 91% cleared in 2014 and low of 74% cleared in 2012 are the greatest high and low Part II percentage clearance values of any UC campus.

A larger amount of Part II crimes occurring at UCSB generally corresponded with a higher percentage cleared value. The data shows that the UCSB police consistently solve Part II crimes more than other campuses, despite the higher crime totals at UCSB.

The population totals used to calculate police ratios and arrest rates across the UC campuses were the data given for individual campuses by the UC police department, which included full population totals (undergraduate, graduate, staff, and faculty) from 2012-2016.

Despite its relatively low population and in-the-middle police ratio, UCSB had an abnormally high arrest rate each year compared to most other UC campuses. From 2012-13, UCSB’s arrest rate per 1,000 people hovered at around 18, but from 2014-16 the arrest rate hovered between 30 to 45 arrests per 1,000 people.

According to Wilson, a possible cause of the relatively high arrest rate is that the UCSB police department assists the sheriff in policing Isla Vista. As such, the department records crimes that occur both on campus and off campus in Isla Vista.

“If Isla Vista is not included, the data for [UCSB] is in line with other campuses,” Wilson said.

Wilson also believes that the high arrest rate could be due to UCSB’s efforts to protect survivors.

“Another factor that could play a role in the data is that our campus also has robust programs in place to support survivors of interpersonal violence, including encouraging reporting which experts point out leads to higher crime numbers,” Wilson said. “We are grateful to have a community that is committed to these kinds of programs and efforts in support of our students.”

“UCPD will continue to partner with our student and community leaders on innovative safety strategies and crime reduction programs,” Wilson said. “By collaborating with our community and sharing campus safety and security information, we aim to increase awareness and stimulate participation in this shared responsibility for maintaining a safe campus environment.”

Siddharth Chattoraj
Siddharth Chattoraj is the assistant data editor for the 2022-23 school year. He loves applying data to various fields to figure out solutions to new and existing problems. He also enjoys journalism, theater, marketing, running, singing, and forming spontaneous plans with friends. Siddharth can be reached at data@dailynexus.com.

Great data visualization, I like how you collapsed all the graphs and used different colors. I’m having trouble finding the story. This paper would great as a resource (w/ all its concise data) but as a writer you need to create a story with the data. What sticks out to you as you dig through the data. What are the highlights? Pull me in. What should I be directing my attention to? I know, who tf am I to tell you, right? Well I work in Institutional research, and I can tell you this looks promising. Just remember that being… Read more »