In their first game of the 2022-2023 season, the UCSB ice hockey team beat Cal State Lutheran by a score of 13-2. This is the first win of hopefully many for the Gauchos, who are looking to have a successful season. 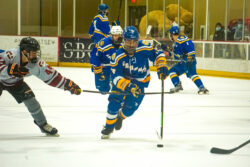 UCSB jumped to an early lead as they found themselves up by a couple of goals at the end of the first period. The Gauchos never let up as they continued to gain momentum and confidence throughout the game.

“The game was good for me,” Rubin said about his first game playing for the Gauchos. “I really enjoyed getting to know all the players and how they play. We were in sync but are still trying to figure out how to play together.”

Even in the hostile environment of an away game, the UCSB ice hockey team was able to pull out a win. Some players believe the opposing crowd may have tried to make an impact in other ways besides cheering.

The leading scorer for the Gauchos was forward Fernando Sansone. Sansone scored a hat trick while the captain of the team, Mitch Kiner scored the first goal of the game.

As a Division II team, ice hockey has not been the most popular sport at UCSB for students. But looking at the team, there is a buzz within them different from years past.

“Games are a lot of fun to watch even if you do not know what is going on,” Rubin said when asked why UCSB students should make it out to the team’s home games. “It is fun to see people skate around and get roughed up.”

Next up, the UCSB men’s hockey team will stay on the road to take on Chapman University on Oct. 14. The Gauchos will look to continue their strong start to the year.