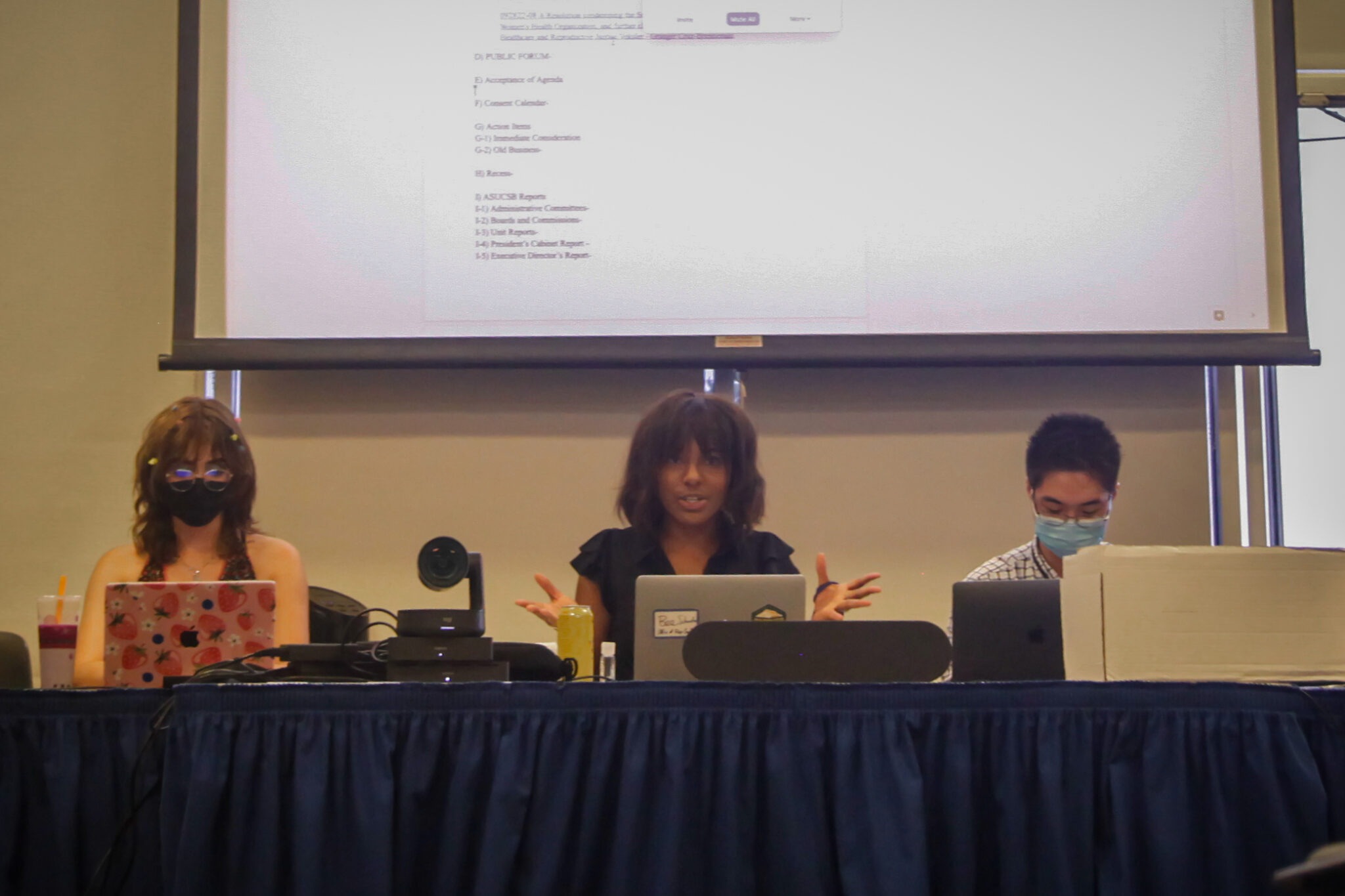 Schaefer did not approve any honoraria over the summer or approve the appointments of Boards, Committees and Units members, multiple A.S. sources confirmed to the Nexus. Mark Alfred/Daily Nexus

In the days leading up to the meeting, dissent against Internal Vice President (IVP) Schaefer was vocalized by several Associated Students (A.S.) sources within A.S., who said her alleged failure to perform the functions of her office resulted in a variety of internal issues and funding problems for the association, including a lack of summer honoraria for all A.S. student employees.

Before Wednesday’s meeting, Schaefer had not called the Senate to session since June 1 of Spring Quarter 2022, and the last email vote by the Senate was conducted on June 27. Schaefer had not appointed a first pro-tempore — the IVP’s second-in-command — a finance and business chair or an honoraria committee, A.S. Assistant Director of Governmental Services Holly Mayes confirmed to the Nexus.

Schaefer did not approve any honoraria — stipends for A.S. student employees — over the summer or approve the appointments of Boards, Committees and Units members, multiple A.S. sources confirmed to the Nexus. Schaefer maintained in a statement to the Nexus that all actions taken by her and her office throughout the summer were in accordance with A.S. Legal Code.

At the Senate’s Sept. 28 meeting in the UCen Flying A Studios Room, speakers at the Senate’s public forum voiced complaints regarding the resulting deficiencies in A.S. funding and function after Schaefer’s alleged neglect of her position.

Chancellor Henry T. Yang was in attendance at the start of the meeting, delivering a short speech in support of A.S. in the new academic year as the university returns from the COVID-19 pandemic.

“We are so happy you’re back, and we are commending the 73rd Senate and A.S. meeting today,” he said. “You have a tremendous responsibility … you will be credited as the rebuilders of campus after this pandemic.”

A representative of the Committee on Committees requested honoraria in compensation for work done throughout the summer and addressed the blockage of funding due to a myriad of internal issues. Boards, Commissions and Units had severe difficulties accessing funding due to a lack of IVP and Senate appointments and the lack of a finance and business committee chair, multiple A.S. sources said to the Nexus.

“We don’t have any money in our budget. We are zeroed out, like a lot of other committees. So we’re severely underfunded for the work we’re doing,” the speaker said.

Senator Adam Majcher, a member of the Finance and Business Committee, said the committee’s first meeting of the year will occur next Monday, and the majority of financial requests will be resolved then. Due to the lack of a Finance and Business Committee chair, the committee was unable to fulfill funding requests throughout the summer and is still generally unable to meet with the empty position.

“For all the students that were unable to receive funding this week because of, frankly, our student government’s negligence, I will be fiercely advocating for breaking financial policy and legal code in order to retroactively fund their events,” Majcher said.

One speaker addressed Schaefer’s collecting summer honoraria while other A.S. employees remained unpaid. The same speaker directed the issue at Yang, asking him if he knew that Schaefer “took $3,000 worth of student tuition” in reference to her summer stipend payment — which her and other executives received despite all other A.S. employees remaining unpaid, multiple sources confirmed.

Yang departed the meeting following the comment, and the speaker exited public forum.

“It’s been really weird being someone who ran a political party and getting asked all summer long how to train a Senate,” Merkel said. “I’d love for some action to take place.”

Andrew Vasquez, Deputy Head of Staff in the A.S. Office of the President, alleged violations of legal code regarding Schaefer “postponing the swearing in of this very senate, while holding existing senators in their positions past their required legal date.”

“With the goal of shifting the blame away from her position, Bee has requested that we meet her in office hours. She has failed to show up to those office hours when I and multiple others have visited and she often does not respond to emails when contacted. Communication with the IVP has become increasingly inaccessible,” Vasquez continued.

“It has taken a lot for me to want to speak out about this topic, for fear of retaliation as I work directly with your office.
I want to share this as student because I feel hurt and betrayed by this association, as we’ve overlooked someone who has repeatedly failed to meet their duties as outlined.”

Throughout the public forum, Schaefer said that she would not address complaints or concerns directly but that students with questions or issues could attend her office hours at a later date.

Following the public forum, the Senate resumed orders of the day and appointed several internal committee positions that previously had not been filled, including Senator Adam Majcher as Finance and Business Committee Chair.

The meeting went into recess following the appointments, and will resume next week, Schaefer said.

[Correction 09/29/22 3:22 p.m.]: This article has been corrected to reflect that Senate did not officially close session and that there is currently no pro-tempore.

[Correction 10/20/22 9:23 p.m.]: This article has been corrected to reflect that Andrew Vasquez is the Deputy Head of Staff in the Office of the President, not a senator.

This article has been updated with statements from Senator Andrew Vasquez.