UCSB men’s water polo, the No. 8 team in the nation, had a solid week leading up to the school year as they went 3-1 in their last 4 matches. This run included a victory against No. 13 UC San Diego, a 2-game victory in a Thursday doubleheader, and a loss to Long Beach State. 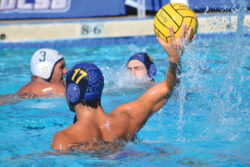 In their first game of the week, the Gauchos traveled south to take on the UCSD Tritons. This was UCSB’s second victory against the Tritons in two weeks. The match was contested in the 1st quarter as both teams traded blows to make the score 3-3. However, UCSB entered the locker room at halftime down a goal as the Tritons outscored them in the 2nd quarter 2-1. The Gauchos regrouped and made the 2nd half their own as they began to click on offense. UCSB scored 4 goals in each 2nd-half quarter, and the Tritons could not keep up. UCSD scored only 3 goals in the 2nd half combined. Sophomore center Dash McFarland led the scoring for UCSB with 3 goals in the game. Senior driver Ryan Brosnan had 3 assists, while senior attacker Mason Chambliss had 3 steals. This match was the Gauchos 3rd straight victory against a nationally ranked opponent in four tries.

In their next match, UCSB took on the No. 9 Pepperdine University Waves. The Gauchos started out on top with a 2-0 lead, however, Pepperdine fought back to tie it 2-2. After the Gauchos retook the lead, they never gave it up again, as they finished the match with a 12-8 win. Brosnan led the Gauchos in scoring alongside senior center Sam Nangle, who both put three balls in the back of the net.

On the same day, UCSB men’s water polo took on the Westcliff University Warriors. The Gauchos never found themselves trailing in this match as they played a strong game throughout. First, UCSB made it 3-0, however, Westcliff was able to tie the game. In the end, this did not matter as the Gauchos ended the game on a 7-3 run to win the match 12-8. The leading scorer for this match McFarland again with 3 goals.

In their final game of the week, UCSB fell to Long Beach State. In this game, the Gauchos were never able to take the lead. At first, Long Beach made the score 2-0, but the Gauchos were able to tie the match at 2-2. However, Long Beach dominated the rest of the game, as they scored 3 goals in 44 seconds to take an 8-4 lead into the half. Brosnan was the only Gaucho with multiple goals, as he scored twice.

With the three victories and single loss, the Gauchos improved their record to 6-4. UCSB’s next matches will take place at the Mountain Pacific Sports Federation Invite.