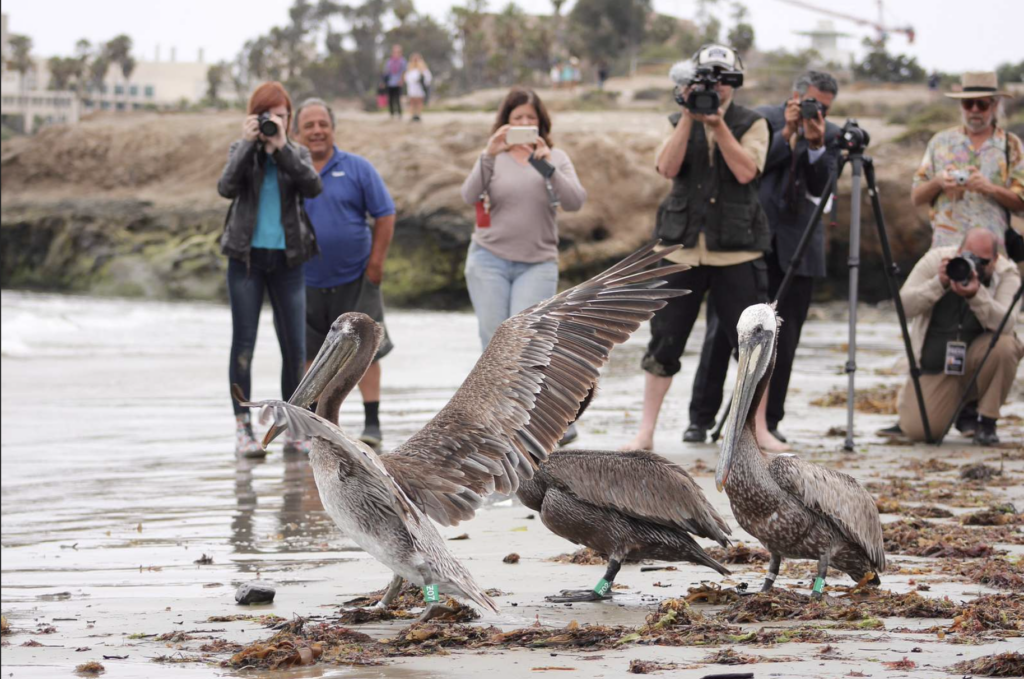 While the exact cause of starvation is still unknown at this time, a few theories include abnormally strong winds (Santa Barbara gusts reached 19 mph in June) in the past few months making it difficult for the pelicans to forage, as well as the possibility of increased competition for food due to surges in brown pelican populations in the last few years. / Courtesy of Valerie Kushnerov

Over the last six weeks or so, hundreds of brown pelicans up and down the California coast were either found dead or rescued and brought to local wildlife rehabilitation centers and hospitals, accounting for one of the area’s more recent ecological mysteries.

Until recently, researchers and rehabilitators theorized the cause of the massive die-off to be a strain of avian influenza or other contagious infection, or even a poisoning event by compounds, such as domoic acid — a naturally occurring toxin produced by algae. The birds arrived at facilities extremely emaciated, with many having additional injuries as well.

However, the California Department of Fish and Wildlife announced in a June 24 press release that they had ruled out avian influenza, as well as domoic acid poisoning, and that the evidence points to starvation.

UC Santa Barbara professor Stephen Rothstein of the Ecology, Evolution and Marine Biology department, who happens to specialize in ornithological research, also gave some insight into previous crises like this one and how the current situation has been dealt with.

“Events like this recent crisis have occurred in the past, in 2010 and other years, and may be natural, or it’s possible that ocean warming caused a decline in fish numbers,” he said. “I think the public, government agencies and NGOs have all responded very well.”

He also posed additional questions, including what the physical state of local fish populations is and whether other birds with similar food requirements, like cormorants, also suffered.

While the exact cause of starvation is still unknown at this time, a few theories include abnormally strong winds (Santa Barbara gusts reached 19 mph in June) in the past few months making it difficult for the pelicans to forage, as well as the possibility of increased competition for food due to surges in brown pelican populations in the last few years. Food supply is not thought to be the reason due to a current abundance of the brown pelican’s main food source: anchovies.

For about 30 days straight, the Santa Barbara Wildlife Care Network (SBWCN) received an average of nine pelicans a day. The birds were cared for at the SBWCN’s newly constructed Wildlife Hospital and were mostly kept in a spacious back room where they were fed and washed. Once the birds had been given food, water and medicine if needed, and provided that they were doing well enough, they were allowed into an enclosed outdoor pool area.

“Between May 14 and June 14, we rescued about 270 pelicans,” said Communications Manager Lauren Gonzales. “We were transferring a lot of pelicans every day to International Bird Rescue (who has a much larger facility and capacity), so we had a lot of birds shifting in and out each day. At one point we had at least 100 pelicans in care at our facility.”

Gonzales said the strain on the Care Network’s hospital was significant; due to the enormous amount of supplies, volunteers and space required, the SBWCN was pushed to its limits. “For perspective, SBWCN cared for about 100 brown pelicans in all of 2021,” she said. “We hit this number within the first 5 days of the crisis, so needless to say it was a much bigger number of pelicans than we’re used to.”

Each bird that arrived at the hospital needed a full intake exam, consisting of weight, temperature and hydration level checks, among other things. Once a treatment plan was developed, the birds were given fluids, food, warmth and medication if needed.

“Not only is this incredibly time-consuming for our staff, but the cost of fish, fluids, medications, enclosures and supplies for hundreds of pelicans is really expensive,” Gonzales said. “In addition, we are still in the middle of spring baby season, which is our busiest time of year for wildlife rehabilitation.”

Nonetheless, the Santa Barbara and Goleta communities rallied to aid the SBWCN in successfully caring for all of the birds taken into their care in a touching display of resilience and teamwork that Gonzales said was “inspiring to see.”

Gonzales said that the situation is getting better; the number of pelicans being admitted to the hospital started to drop off after the first few days, and most of the pelicans in their care responded very well to the treatment regimens.

A total of 60 pelicans were released in the last two weeks of June, and there were only 11 birds left at the SBWCN hospital as of last week, as the rest were either released or transferred to International Bird Rescue. “We’re grateful that so many birds were able to get a second chance.”