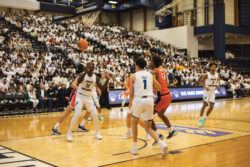 Coming off a successful 2021 season, senior forward Amadou Sow comes in as the best overall player and best defensive player. Sow had a solid year averaging almost a double-double with a rate of 15.6 points per game and 8.4 rebounds per game; both numbers led the team. Sow also led the team in blocks per game and averaged almost 1 block every appearance.

The best freshman for UCSB this year was guard Ajay Mitchell. In his first year as a Gaucho, Mitchell led the entire team in minutes per game (32.1) while also averaging 11.6 points per game and 3.7 assists per contest. The freshman also averaged around 1 steal in each game he played. Mitchell was also heavily featured in UCSB’s starting lineup, as he started in 23 of the 28 games the Gauchos played this year.

The Gauchos’ best game of the year was a 72-45 drubbing of the Cal State Northridge Matadors. This margin of victory was the largest for UCSB against any Big West Conference opponent this season and was a rare showing of total dominance for the Gauchos this year. Senior forward Miles Norris led the team in scoring for this game by scoring 31 points and shooting 9 out of 10 from behind the 3-point line.

Unfortunately, the Gauchos did not have the season they’d hoped for after bowing out to Long Beach State in the Big West Tournament semifinals. Head coach Joe Pasternack and his squad will look to pick up the pieces and return to contending form in the Big West in the 2022-23 season.