The Daily Nexus
News
Admissions Data Show 5% Increase in Student Applications for UCSB
May 21, 2022 at 10:00 am by Holly Rusch, Christy Yu and Stella Jia

This year, UC Santa Barbara had a record total of 128,596 applicants — a 5% increase from last year — and 35% of California applicants were first-generation college students.

Key elements from released data showed that a majority of applicants — 66% — are from California, with an even split of 17% out-of-state and international students each.

Additionally, the top three applicant demographics are Asian-Americans, at 36%, Chicanx/Latinx, at 30%, and White, at 26%.

Although data on admitted applicants has not been released by the UC Office of the President, Reyes said that the university expects the class of first-year students to look similar to what it has been in previous years. 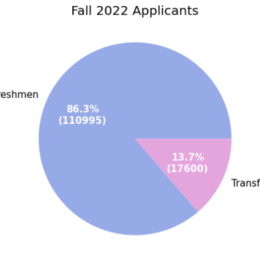 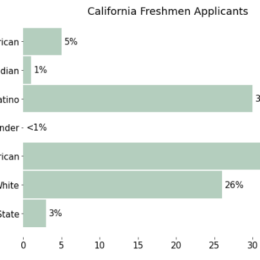 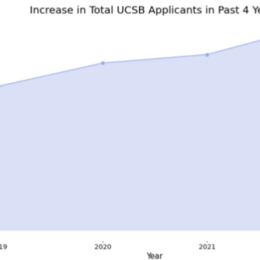 Over the past four years, UCSB saw an increase in total applicants — including freshmen and transfers — applying for admission. Stella Jia/Daily Nexus 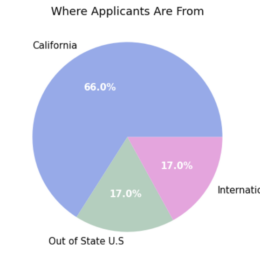 The 2022 UCSB applicants are largely from California — 66% of applicants from in state — and an even split of 17% out-of-state and international students. Christy Yu/Daily Nexus

Stella Jia
Stella Jia (she/her/hers) is the 2021-2022 Data Assistant. She enjoys being in nature, creating data visualizations, and trying new Ben & Jerry flavors. She can be reached at data@dailynexus.com.