The Daily Nexus
News
Mauna Kea Protectors UCSB Calls for UC To Divest From TMT Project
May 19, 2022 at 2:00 pm by Asumi Shuda

Mauna Kea Protectors UC Santa Barbara is calling for the University of California to divest from the Thirty Meter Telescope project and is working to be a presence of student activism and a space of community for Indigenous students. 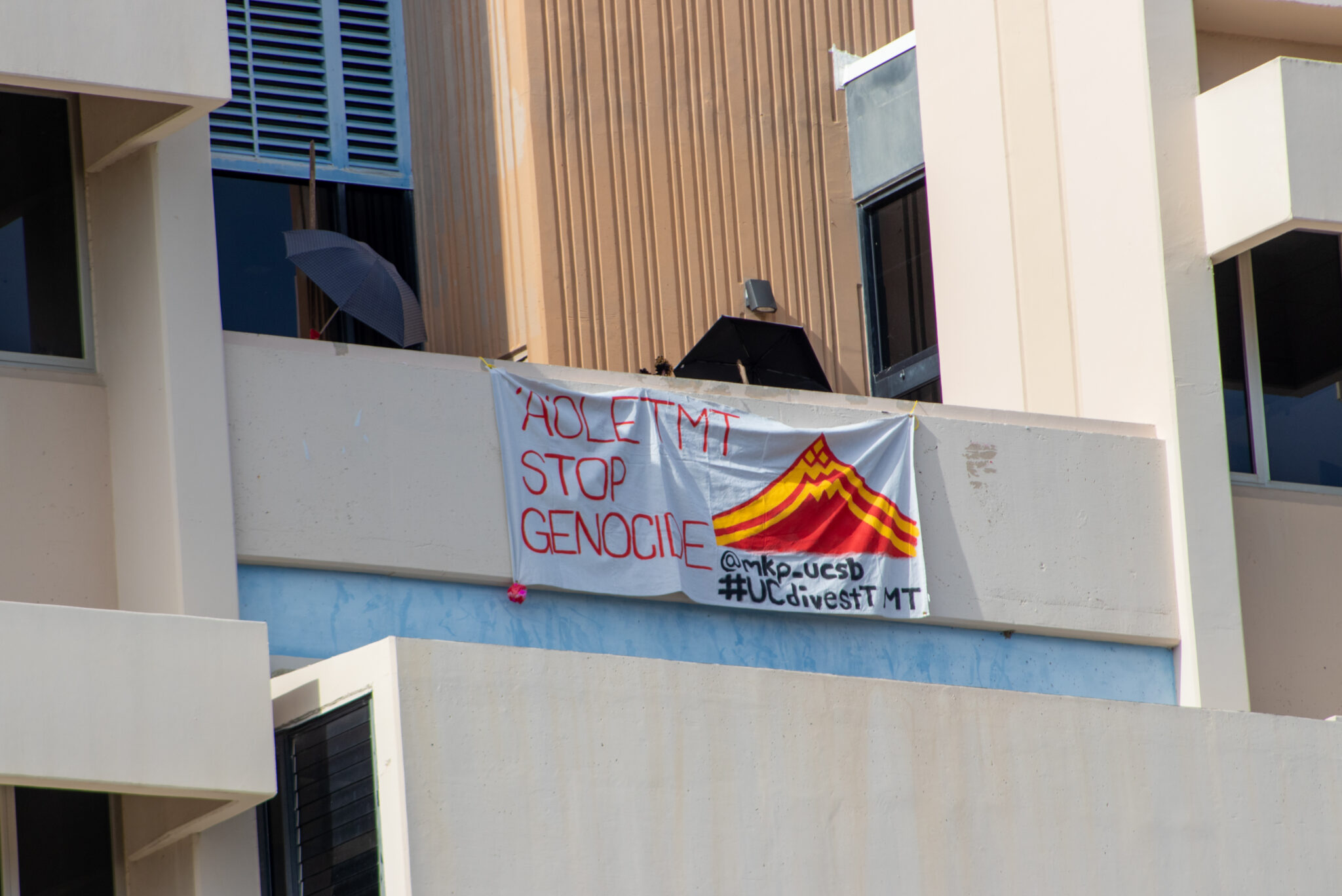 MKP UCSB will be giving public and written testimony to the UC Board of Regents at their upcoming meeting on May 18 against the TMT project. Sydney Haupt / Daily Nexus

The Thirty Meter Telescope (TMT) project is an endeavor partially funded by the UC to build a large scientific telescope on Hawai‘i’s Mauna Kea — land sacred to native Hawaiians — for the purposes of astronomy. Student groups, including Mauna Kea Protectors, have protested against the project — an effort spearheaded by Chancellor Henry T. Yang — since Mauna Kea was chosen as a preferred site for the telescope in 2009.

Mauna Kea Protectors (MKP) UCSB was established approximately between 2017 and 2018 in light of the construction of the telescope.

“There were a lot of protectors blocking the construction on Mauna Kea in 2019, and that’s when around 33 elders were arrested on top of there,” said fourth-year political science major and Chair of MKP UCSB Honu Nichols, who is Native Hawaiian.

Currently, MKP UCSB will be giving public and written testimony to the UC Board of Regents at their upcoming meeting on May 18 against the TMT project.

“Our main action is trying to get as many people to use their voice directly to the regents who, at the end of the day, make these decisions of if this project goes through or not,” Nichols said. “The whole reason why we’re doing this is not only to put it on their radar, but we want them to publicly denounce and divest from the Thirty Meter Telescope, so that’s our major focus is targeting the regents, [UC President Michael V.] Drake and Yang directly through letters and over-the-phone comments.”

Much of MKP UCSB’s divestment activism was stalled due to the pandemic, forcing the organization to work remotely in some capacity until this spring quarter.

“There was a lot of movement that quickly got halted because of the pandemic, but UC Divest TMT did not stop there. We just moved remotely, but a lot of our in-person action obviously was at a hold,” Nichols said. “It wasn’t until this spring quarter that we were able to reach out and build capacity in-person on the UCSB campus, and that’s where we started to get a lot of our movement going.”

The main priority of MKP UCSB is to protect the sacred land of Native Hawaiians and uplift the voices of Indigenous peoples, Nichols said.

“This project has opened up a really special opportunity for people to understand the Indigenous people, and their sovereignty and consent to that land is actually of legitimate concern because of the illegal occupation [of] Hawaii by the United States,” she said.

MKP UCSB recently held an event on May 11 at the UCen Lagoon Lawn to raise awareness about Mauna Kea and to call for student activism at UCSB regarding the TMT project. The event had live music, a ceremony, food and a panel on the Sacred & Poetry Public Comment Workshop, ending the day with a screening of the short film “Hawaiian Soul” at the MultiCultural Center.

“I wanted to make sure that [the event] was very much rooted in ancestral teachings and kūpuna and asking for permission and consent from the native Chumash people of the lands that our university resides on,” Nichols said.

The event started in protocol — which works to start and open spaces properly with permission from Indigenous peoples to come onto their land — where members of the Chumash peoples came and welcomed MKP UCSB to be guests on their land.

“We had the tribal chair and a few other Chumash people come and welcome us in protocol,” Nichols said. “We shared chants and prayers to them, asking them for permission, saying that we are guests on this land asking to be welcomed onto their land.”

This process of protocol ended with attendees standing in a line together, signifying that MKP UCSB was officially welcomed onto the land. Nichols spoke to this ceremony being indicative of why the TMT project violates the process of consent that is central to Indigenous peoples and their lands.

“Consent was given [during the event], which is a very instrumental part in why TMT is not okay — because they’re not addressing the consent of the people,” she said. “The protocol wasn’t just asking for permission, but it was also asking for guidance from our ancestors … and these chants that we were doing were asking for divine knowledge and calling them into space just to make it a sacred space.”

The panel that ensued during the event addressed topics of settler colonialism and its long lasting impacts for the Chumash people. The panelists also discussed the Missing and Murdered Indigenous Women, Girls and Two-Spirit People movement and the significance of the UC’s involvement with TMT.

Nichols said that the event presented an opportunity for Indigenous people to come together as a community.

“I wanted the event to be not only a sacred space, but a safe space for Indigenous people to speak openly about their concerns, their struggles and to know that they’re not alone,” they said.

Nichols added that the event provided space to bring intersectional marginalized voices to the forefront.

“Having mostly women and queer women on that panel also provides people [the opportunity] to recognize people on the panel who are a part of this movement and seeing that in themselves,” she said. “I want to uplift Indigenous students by creating space, providing a platform for them to use their voice in community with other Indigenous students.”

Nichols spoke to the importance of MKP UCSB’s existence on UCSB’s campus due to the university’s extensive involvement with the TMT project.

“It’s vital for MKP to be involved and mobilize people at the UCSB campus because UCSB is home base in terms of UC Divest TMT,” they said. “Chancellor Yang sits on the board of governors as the chair of this project, so we have a really special opportunity at the UCSB campus to hold our chancellor, our administration and the entire UC as a whole accountable for their decisions and where they’re putting our money into.”

Nichols said she has a personal stake in the TMT project as a Native Hawaiian and a responsibility to her people back home to ensure that the sacred land of Mauna Kea is protected.

“I have a very deep responsibility to my people and my community back at home to use this opportunity while I’m overseas, trying to obtain a higher education,” she said. “I want to use the short amount of time that I have because I’m a transfer student to use my voice and to advocate for my people and bring justice before I come back home.”

I don’t see genocide mentioned in the article but the picture has this inflammatory statement. Are telescopes killing people?

The reporter missed an important point, Kānaka Maoli support this project as do the residents of Hawaii. I was born, and grew up on Oahu and proud to be Hawaiian. Astronomy in Hawaii is part of our culture, we navigated the vast Pacific for generations. I’m tired of people who don’t understand what’s happening in Hawaii offering bloated opinions based on limited interviews, a refusal to see the entire picture. Yes, many of us are sad about our past but taking away opportunities from indigenous students to study and work in astronomy is wrong. We have the right to use… Read more »

Going to the mountain top, looking up, asking all the deep questions, discovery and exploration… when did this become anything other than deeply spiritual behavior. Observatories on the Mauna are, exactly, heiau. Opposition to the continued use of the mauna to look deeply into the sky is not at all the will of most Hawaiians. It is, instead, a social media driven hijack by those who have embraced the false historical narrative of an oppressed people. The Kanaka were slaves of their Tahitian conquerors until Lili`uokalani’s failed attempt to overthrow of the constitutional monarchy led to its final overthrow.

What happened after the May 18 meeting?