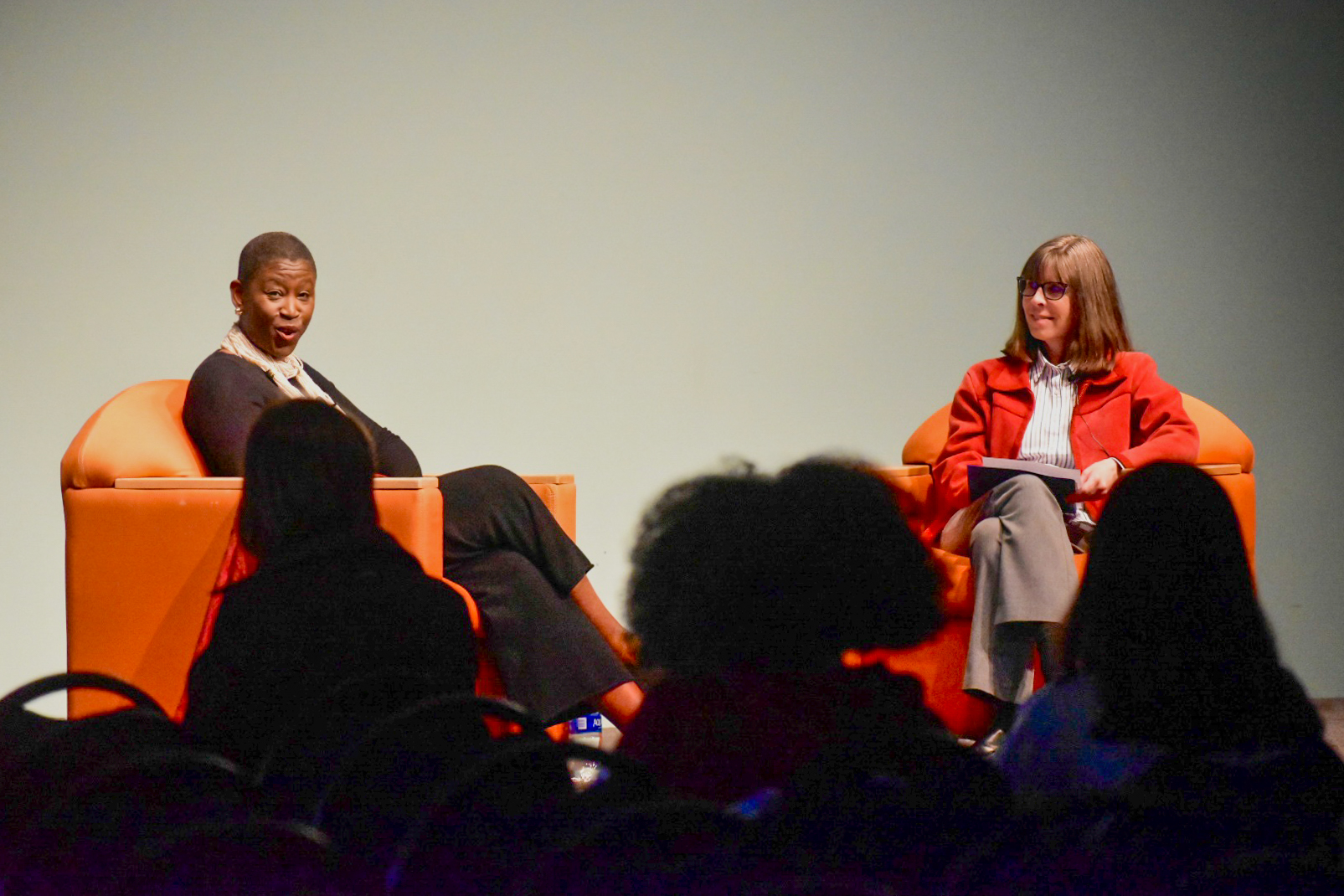 Professor Michele Goodwin and Professor Laury Oaks discuss the past, present and future of the reproductive justice movement on May 9. The event took place on campus at Corwin Pavilion just one week after the leak of the Supreme Court’s imminent decision to overturn Roe v. Wade. Photo by Joela Rodriguez

The event aimed to shed light on the history leading up to Roe v. Wade as well as the legal, medical and political aspects of abortion rights and bodily autonomy.

The controversy surrounding reproductive rights is not new, and the attempt to limit women’s access to health care goes beyond and began before the Supreme Court’s leaked majority opinion, Goodwin said.

According to Goodwin, current contention regarding abortion is the culmination of a long history of cultural and gender discrimination in this country.

“Abortion had not been criminalized originally in the United States … the Pilgrims were performing abortions,” Goodwin said.

“Abortions were being performed by Indigenous people who were here — carrying pregnancies to term, abortion, contraceptions, all of that.”

“Abortion becomes this political hotspot at the time in which we could see the Civil War coming. And … if the Union won, there would be the abolition of slavery, and Black people would be able to live how they wanted to and on their own,” she continued. “The fear about the blackening and browning of the United States was real.”

Goodwin expanded on how, as a result, restrictions on reproductive rights were used to maintain the large disparity between racial communities at the time.

Although Roe v. Wade had set a precedent in favor of women’s rights to health care without restriction from the federal government, national abortion access was still not guaranteed to all parties, and legislation against abortion continued to be enacted on a statewide level.

Many of these new laws targeted underrepresented groups, including Black, Indigenous and people of color, immigrants, teens and low-income families.

An example of post-Roe legislation targeting minority groups is the Hyde Amendment of 1976.

“The Hyde Amendment banned federal funds from being used in the process of terminating a pregnancy,” Goodwin said.

“Essentially, what it meant is that if you’re a poor woman, you’re going to struggle to get to that constitutional right.”

“An array of barriers to [abortion] care have been legally enacted, most [of them] since 1992 [from the Supreme Court ruling in] Planned Parenthood of Southeastern Pennsylvania v. Casey, which allowed more restrictions on abortion access because it declared that restrictions were allowed as long as there was not an ‘undue burden,’” Oaks said.

Goodwin stated that the expected anti-abortion legislation will likely echo the Jim Crow laws of the Civil Rights Movement era, as reproductive rights are on the precipice of the “Jane Crow” period. This term was coined by Pauli Murray, an American civil rights activist and gender equality advocate.

“We’re about to come into a period of ‘Jane Crow,’” Goodwin said. “And we are already seeing it. Where there are governors that are saying next is going to be to ban contraception … we’re going to be policing when people go interstate to try to get an abortion … This is, right now, on the horizon.”

According to Goodwin, these regulations reflect the continued limitation of medical and sexual education about reproductive health.

She said she foresees medical professionals who will be unequipped to handle the many complications that can arise throughout a pregnancy.

“There is gestational diabetes, hemorrhaging; there are any number of conditions that are never talked about,” Goodwin said. “Paying attention and building up infrastructure in that way can be important. Imagine you’re in medical school, and you are not trained to know how to safely manage a miscarriage … when [the patient] wanted to be pregnant but unfortunately [they’re] going to die if [they] continue the pregnancy. There are medical school students who don’t know how to do that.”

Various advocacy groups have mobilized in favor of reproductive rights over the last week after the majority opinion leak.

Though the official decision from the Supreme Court is yet to be announced, Goodwin said that a small source of consolation is that the country has faced such setbacks before.

Goodwin concluded the talk by saying that she is optimistic about a more just and feminist future.