The Daily Nexus
News
Students for Justice in Palestine Demonstration Prompts Conversation About Israel-Palestine Conflict
May 12, 2022 at 2:44 pm by Holly Rusch and Atmika Iyer

UC Santa Barbara student group Students For Justice in Palestine is holding a demonstration in the Arbor this week, featuring a symbolic apartheid wall with drawings and text depicting the Palestinian perspective on the Israel-Palestine conflict. 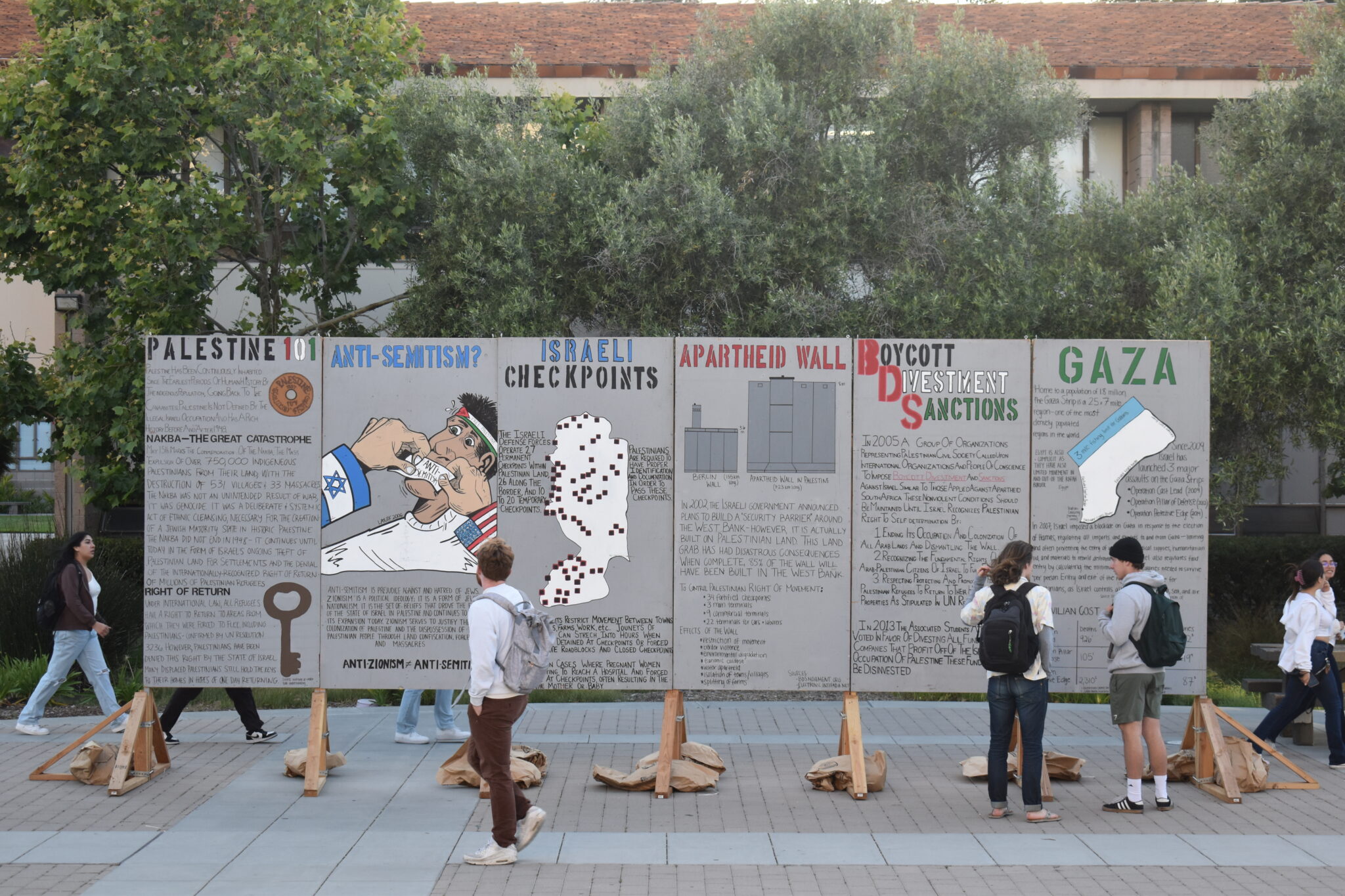 SJP borrowed a mock wall from UCSD that shows the Palestinian perspective of the Israel-Palestine conflict. The wall has been used as an artistic demonstration depicting the wall in the West Bank. Shiuan Cheng/ Daily Nexus

The demonstration is creating conversation and debate on campus around the Israel-Palestine conflict and the content of the cartoons and text on the wall itself, particularly between Students For Justice in Palestine (SJP) and Students Supporting Israel (SSI) student members.

In 2002, the Israeli government began building a wall — considered illegal by the International Court of Justice — at the West Bank. Though Israeli officials argued that the wall was a necessary security barrier, the International Court of Justice concluded that “the construction of the wall, along with measures taken previously, severely impeded the exercise by the Palestinian people of its right to self-determination and was thus a breach of Israel’s obligation to respect that right.”

Discourse on this conflict has historically been controversial at UCSB, particularly regarding proposed Associated Students senate resolutions calling for UCSB and the UC Regents to divest from companies that profit off of alleged human rights violations by the Israeli government against Palestinians. Last year, the Senate public forum on the topic saw 83 community members speak before the senate did not pass a divestment resolution for the seventh time in nine years.

For fourth-year history major and SJP member Jarod Ramirez, the weeklong SJP event — which he described as an “interactive art demonstration protest” — is a way to educate students and foster conversation on ongoing violence and oppression against Palestinians in the region.

“The main reason is for education,” he said. “But it’s also to sort of say, ‘You can’t ignore the oppression that’s happening over there.’”

Currently, Israel is set to add almost 4,000 more homes in the West Bank, effectively annexing a larger portion of the West Bank. Interior minister Ayelet Shaked said that the addition of these 4,000 homes is “basic, required and obvious thing,” according to his tweet.

Fourth-year philosophy major and SSI Co-President Yehuda Jian attended the demonstration alongside other SSI members and supporters to “offer another perspective of information.”

“This wall has a lot of information, some of which we don’t agree is true,” Jian said. “So we’re handing out flyers, and we’re just here to have conversations with people who are interested to show them another perspective.”

The wall — which was borrowed from the UC San Diego chapter of SJP — has a variety of panels, with one explaining the history of Palestine, another with text on the Boycott, Divestment and Sanctions (BDS) movement and several others depicting security barriers and checkpoints in the region.

Jian specifically referenced one panel, which shows a Palestinian man with his mouth being covered by a piece of paper that reads “antisemitism” by two hands — one with the Israeli flag on the wrist and another with the American flag — as an example of an antisemitic trope originating from before World War II.

“That claim … actually digs back into tropes that have been around since before World War II, about Jews and Zionists working with the government to keep the population down [when] trying to speak out about the dangers of Zionism,” he said. “That’s actually a very old antisemitic claim that originates in a work called ‘The Protocols of the Elders of Zion.’”

One second-year sociology major and SJP member, who preferred to remain anonymous for privacy concerns, rejected the idea that the wall is antisemitic.

“All the artwork on these panels are here to show the real lived experiences of Palestinians; a lot of Palestinians who express their views, they’re wanting to live [and] wanting to exist,” she said. “A lot of people suppress that by saying, ‘Oh, this is antisemitic,’ which is completely false … saying that everything we are doing is antisemitic just perpetrates the false narrative that Palestinians don’t have a right to live.”

Ramirez said that while he believes “a majority of the pieces on [the wall are] facts,” SJP covered up certain portions of the wall, like one segment that depicted an Israeli man running away from a rocket, because individuals found them offensive.

“When people have complained, we have tried to come in and accommodate, because we’re not trying to spread antisemitism here,” he said.

Fifth-year psychological & brain sciences major Simon Nezhad said that as a Jewish Iranian refugee, the demonstration was a stark reminder of the antisemitism that exists in Iran.

“Unfortunately, this is very reminiscent of the things I’ve seen in the streets of Tehran and not in the ways I like. I miss where I’m from, but I don’t miss the antisemitic caricatures and cartoons that are displayed on the wall,” Nezhad said.

“Many of [the cartoons on the wall] have actually received awards and Holocaust denial conferences in Tehran. So they’re actually the same exact cartoons that I have seen in the Iran streets. Again, I love Iran. It’s the place I came from. But this antisemitic sentiment is the part that I escaped for,” he continued.

According to a post by SSI’s Instagram account, the artist of the cartoons depicted on the wall won an award from the Iranian government’s Holocaust cartoon contest.

Both SJP and SSI members said that while some conversations were fruitful, others created tension and vitriol.

Nezhad said that the solution lies in dialogue between the two sides but critiqued SJP for not engaging in conversation with Zionist students.

“If we’re able to speak to the other side and they speak to us, we can actually establish something, but unfortunately, the organization that’s behind this [wall] has something that they call an anti-normalization policy, which means they will not normalize their relations with Zionist students,” Nezhad said.

Ramirez said the demonstration could function as an opportunity to have dialogue and discourse about the Israel-Palestine conflict.

Jian said that moving forward in dialogue on the conflict, “the best conversation to have is to have a conversation of coexistence and peace” and that SSI member attendance at the event was to ensure that Jewish students on campus felt safe and represented.

While Ramirez reiterated the sentiment that some conversations fostered by the wall have been productive, he said that others ignored human rights violations committed by Israel.

“[SJP is] not trying to deny anyone’s indigeneity, but at the same time, there is a colonial project over there that we see that we do not agree with,” he said.

Can’t free something that was never enslaved ❤️

That SJP employs an image from Iran’s Holocaust Cartoon contest, an event created by institutionally antisemitic and Israel-eliminationist regime illustrates the nature of its messaging and its aims. SJP demonize Israel and Israelis through historical revisionism, cherrypicking of facts, and outright slurs. SJP does not advocate for or facilitate debate. SJP does not advocate new peace talks or dialogue, new political concessions on both sides, offer new plans for coexistence, or a fresh vision for a just, two-state solution. SJP does not advance thoughtful critiques of Israeli state policies or the Palestinian Authority; it demands Israel’s destruction. The founder of… Read more »

Wow, that’s a lot of text to write when you could have just said “I look the other way on crimes against humanity if they’re being carried out by my favorite ethnostate”.

Here’s Israeli police literally beating unarmed pallbearers at a funeral (for a journalist the IDF shot in the head a couple days prior): https://twitter.com/Rushdibbc/status/1525114366403743744

The government of Israel originally released a video purporting to show she was killed by Palestinian resistance fighters, but had to retract that claim when the area shown in the video was conclusively shown to be remote from the location where she was shot this past Wednesday.