The Daily Nexus
Track and Field
Steve Scott Invitational Provides Success for Gauchos
May 12, 2022 at 1:23 pm by Abigail Monti

Closing out the end of the regular season, the UC Santa Barbara track and field team competed at the Steve Scott Invitational at UC Irvine April 29-30. A select number of athletes from the distance event groups headed north to the Fresno State Invitational that same weekend to face some of their best competition yet. 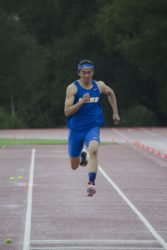 The Gauchos truly rose to the occasion, coming home with 9 new marks to add to UCSB’s top 10 performances of all time as well as dozens of personal records. With the Big West Track & Field Championships beginning last weekend, the Gauchos are peaking at just the right time.

In throws, junior Jared Freeman led the team with a massive discus PR of 54.10 meters. The mark puts him 3rd on the UCSB top 10 list for discus, and will likely qualify him for the 2022 NCAA Division I Outdoor Track and Field West Preliminary Rounds at the University of Oregon next month. Also in discus, sophomore Saloni Khandhadia threw back-to-back PRs, finishing out with a mark of 47.24 meters. In the javelin, senior Kendall Martin threw another PR of 43.64 meters, keeping her at 4th all-time at UCSB.

The distance team also had a strong showing, with reigning conference champion graduate Nick Randazzo knocking 3 seconds off his record 3000-meter steeple time. His new time of 8:58.50 keeps him 9th-best all-time at UCSB. In the same event, sophomore Sierra Ransweiler clocked 4:48.54 in the 1500-meter run.

The sprint team certainly held their own, led by freshman Jessica Boyd, whose incredible 11.98-second 100-meter dash ties her at 5th all-time at UCSB. Boyd will attempt to break the school record next meet, which hovers within reach at 11.80 seconds. In the men’s 100-meter dash, junior Justin Fong tied for the 9th-best mark at UCSB, clocking a cool 10.76 seconds, followed closely by sophomore Ryan Searl at 10.83 seconds. Searl also performed well in the 200-meter dash, running a PR of 21.82 seconds.

“This was the most complete team performance we’ve had this season,” said Director of Cross Country/Track and Field Cody Fleming. “We have momentum which is where you want your team to be heading into the Big West Championship. We take pride in being a balanced program and that was on full display in Irvine. Our sprinters went off and the throwers, jumpers and distance runners were right there with them. Time to lock in the focus and dial it up to the next notch for Davis.”

The Big West Track & Field Championships kicked off with the heptathlon and decathlon last weekend in Davis, CA, and will be followed by individual events on May 13-14. Both the men’s and women’s teams stand to place top 3 overall. With this many Gauchos to keep your eye on, expect many more top 10 performances, PRs and podium finishes to come.

A version of this article appeared on p.7 of the May 12, 2022 print edition of the Daily Nexus.