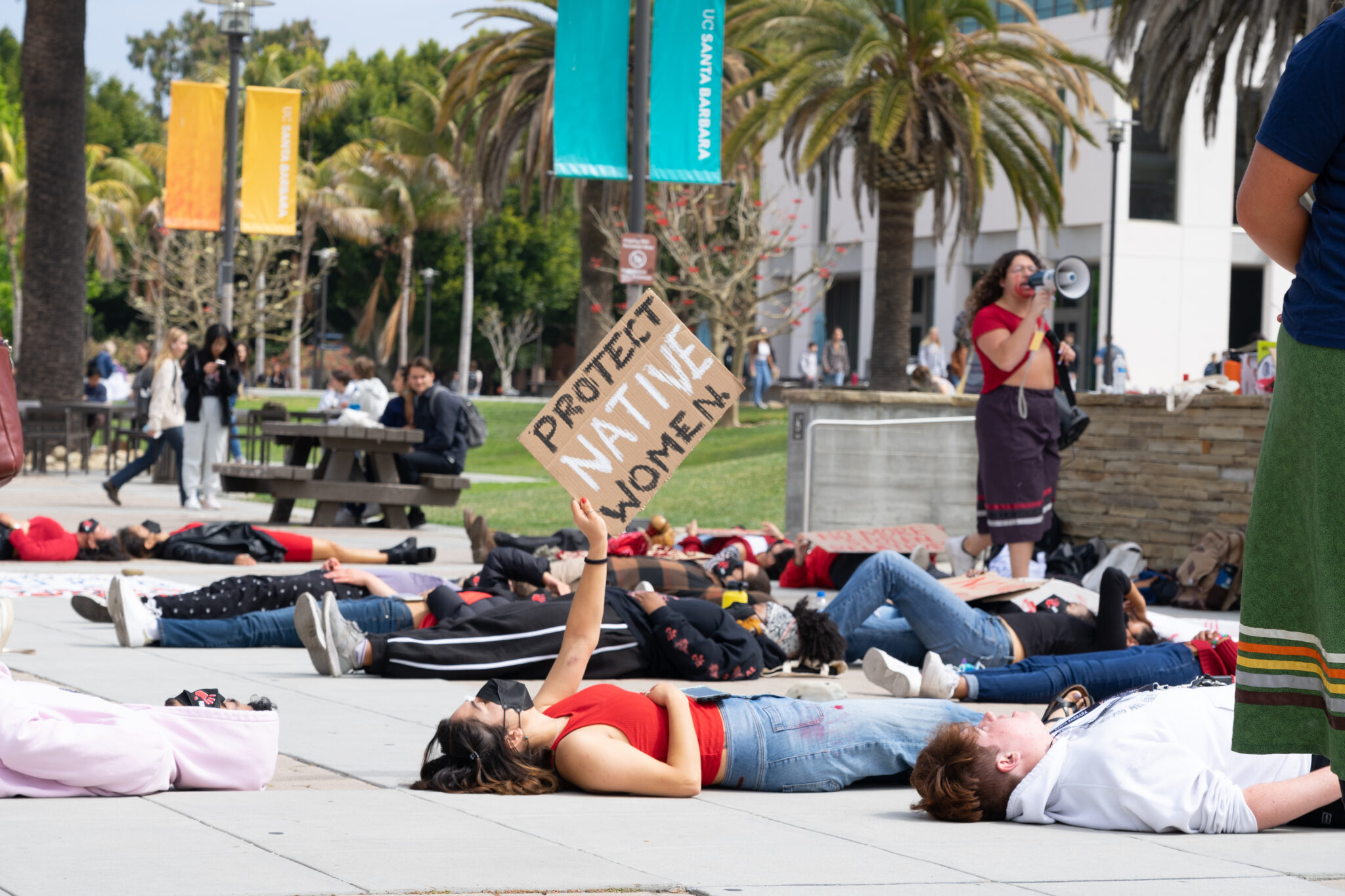 Around 40 individuals participated in the die-in midmorning in the Arbor. Justin Tse / Daily Nexus

“Most native women will face violence by the age of 18, and I faced violence by the age of 15. Specifically at the intersection of being gender non-conforming, trans Native and a [femme] person, I’ve always expected my life expectancy to be 32,” they said. “If you are Black or Indigenous and you are trans or two-spirit, the likelihood that you will see past the age of 35 is slim, extremely slim.”

“I have lived my life believing that I will disappear from this earth and I will be stolen from my family, from my community, from my friends by that age. And every year when my birthday passed around, it never felt like a point of celebration to me — it always felt like I’m getting closer to my death day,” Quintero-Cubillan continued.

Quintero-Cubillan said that this fear as an Indigenous and queer individual instilled in them the need to bring awareness to the murders, kidnappings and violence against Indigenous women, girls and two-spirit people in order to ensure that life can be celebrated with joy, not fear of violence

Alongside Collective of Pueblos Originarios in Diaspora, American Indian and Indigenous Cultural Resource Center and Mauna Kea protectors, Quintero-Cubillan’s Office of the External Vice President for Statewide Affairs conducted a Missing and Murdered Indigenous Women, Girls and Two-Spirit People (MMIWG2S) awareness event through a die-in on May 5 — a day of national observance on Missing or Murdered Indigenous Persons Awareness Day.

Around 40 individuals participated in the die-in — a demonstration where people gather and lay on the ground as if they were deceased — midmorning in the Arbor.

Fifth-year environmental studies major and peer mentor for the American Indian and Indigenous Cultural Resource Center Cameran Bahnsen said MMIWG2S Day is an opportunity to bring the discussion of violence against Indigenous communities to the forefront of the national conversation.

“I think Indigenous communities and issues are often overlooked, so MMIWG2S Day is a way to bring visibility to what impacts us as Native people,” Bahnsen said. “We’ve faced violence since Europeans arrived, and now we still continue to face violence for a variety of reasons.”

Bahnsen said since UCSB is a land grant university — a university built upon Indigenous land — it is imperative for students to understand the violence perpetrated against the Chumash people in order to create the university.

“Land grant universities were formed based on the violent removal of Indigenous people off of their lands,” Bahnsen said. “All of us who attend UCSB and other schools in the UC system, we benefit from that violent history because we can be here and we can go to school and get an education on the ancestral home lands of Indigenous peoples like our Chumash relatives.”

“Highlighting Indigenous communities, Indigenous voices and Indigenous issues is crucial for us because we benefit from that system,” she continued.

The die-in began with a circle of intention amongst the event organizers to speak on why they chose to be present during the demonstration. When reflecting on the event, Quintero-Cubillan said they offered their traditional medicine to those in the circle during the discussion on intentions.

Demonstrators of the event laid on the ground in front of the Arbor at UC Santa Barbara to display solidarity and support for the Indigenous community, physically blocking witnesses from walking by without acknowledging the participants.

“It’s really easy to turn off the rest of the world and the rest of the world’s problems because we become self-consumed with our own,” Quintero-Cubillan said. “Seeing the community stand up and raise our voices — it’s a way of forcing us to pay attention, because how else are you going to hear it unless you’re already involved or someone directly brings it to you?”

The organizers and attendees then created a banner, painting their hands in red and pasting them onto the paper.

“This is a collective banner of all of us putting our handprints because the red handprint is symbolic of a movement from MMIW,” Quintero-Cubillan said. “I also wanted us to create something together to show that we are united, to show that it’s not just Native people. It’s our allies, it’s everyone in the community who is showing that they care.”

The event ended with Quintero-Cubillan, Bahnsen and doctoral candidate of feminist studies and advisor of Collective of Pueblos Originarios in Diaspora Nancy Morales speaking on the importance of May 5 and their respective organizations.

“Then our Chumash relatives gifted us with a few songs, and after they sang, we came together, we gave lots of hugs, lots of care work and we wrapped up,” Quintero-Cubillan said.

Quintero-Cubillan spoke to why the group decided to host a die-in to spread awareness on MMIWG2S this year.

“Die-ins are really effective because it’s a way of forcing people to disrupt their day-to-day lives and pay attention to death and violence against the community,” Quintero-Cubillan said, noting that community reactions were varied.

“I noticed a lot of people, and we did get a pretty big crowd of people around us,” Quintero-Cubillan said. “We also had a professor threaten to call the police on us because his students were taking a midterm, and our response was, ‘Your midterm is not worth our lives, one midterm is not worth an entire genocide.’”

During MMIWG2S Day last year, Indigenous student organizations honored the day of observance through other methods like presentations. However, Morales said the decision to make this year’s awareness event a die-in was to send a physically disruptive message to the campus community about the severity of the issue.

“The die-in makes a stronger message to really make people uncomfortable and bring some visibility on campus,” Morales said. “It is to … create some kind of momentum, so whether some people were bothered or not, if they were, that was the goal: to create discomfort and disruption on campus.”

She said that conversations on MMIWG2S cannot stop after a single day of raising awareness because the issue is an everyday struggle for Indigenous communities. Regardless, Morales appreciated the participation and the support from the community throughout the die-in.

Morales noted that “May 5 is not just a one-day event, we don’t come just this one day to do this, but it’s an everyday struggle.”

“I’m really grateful for all the students and people that participated on that day,” Morales continued. “It was an honor and a privilege to be there with them to create the space together.”

Quintero-Cubillan spoke to the importance of MMIWG2S day as a two-spirit, Native individual.

“I want people to see and to hear how it feels to legitimately be forced to pay attention to us,” Quintero-Cubillan said. “I am dying, and I’m doing it quietly. I am dying in silence and I will disappear from this world if this crisis continues and I refuse to die silently.”

Furthermore, Quintero-Cubillan emphasized that the world does not need to know these statistics showcasing violence to care for the Indigenous community.

“90% of Native women will face violence, but you don’t need to know about that statistic to care because at the end of the day, we are human,” they said. “If you care about the future of humanity, you will care about Indigenous people because we guard over 80% of this world’s biodiversity, yet we are 5% of the world’s population.”

“When you fight for Indigenous people, you are fighting for your planet and you are fighting for our collective future,” Quintero-Cubillan said. “Please don’t wait for us to die to finally care about the movement because there will come a day where … I may be lost to violence, and I don’t want that to be the reason why people start caring.”