The Daily Nexus
Events
Orville Peck Showcases “Queer Country” at The Arlington Theatre
May 11, 2022 at 8:00 am by Graham Glass 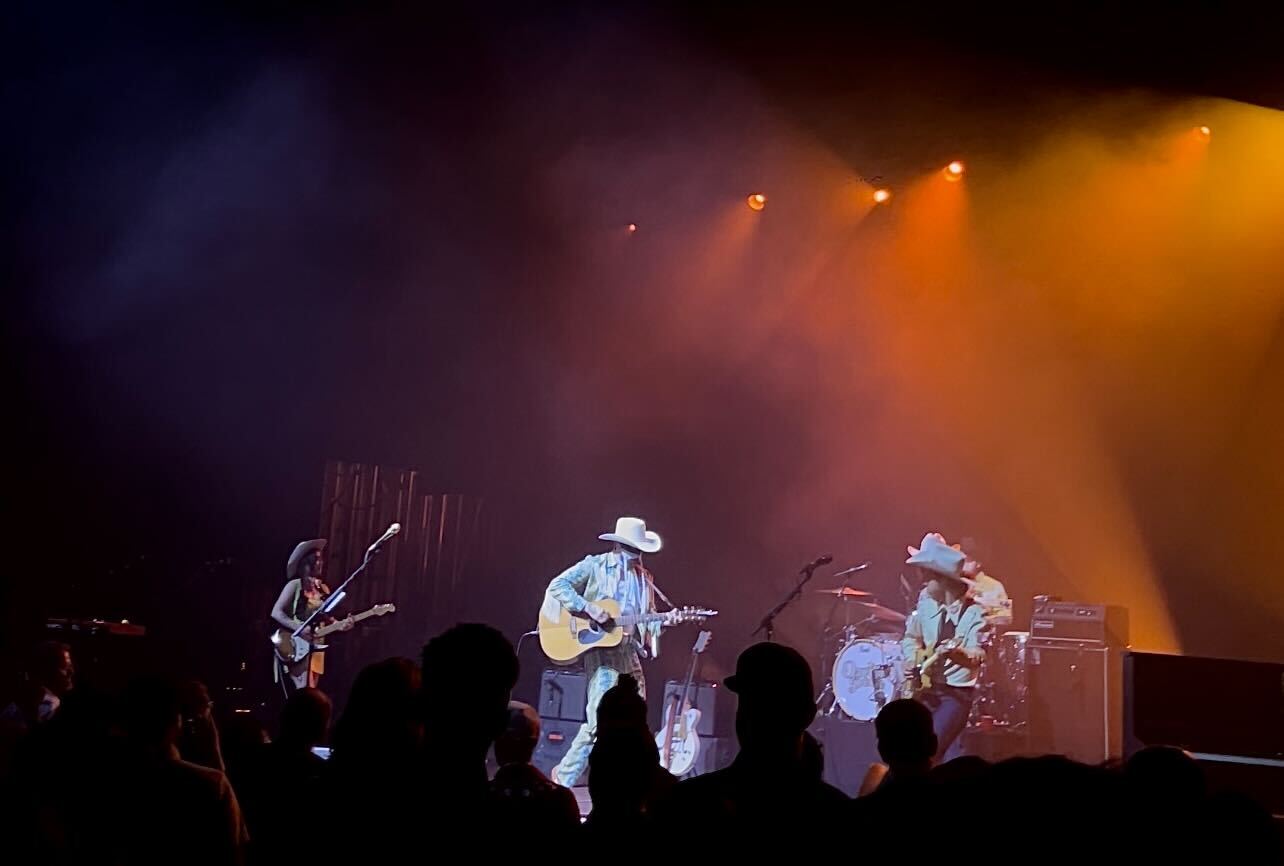 An anonymous cowboy in a fringed mask and floral print suit had complete control of The Arlington Theatre on April 26. The cowboy, multitalented country singer Orville Peck, was in Santa Barbara for the first time on his Bronco tour in support of his most recent album of the same name.

Orville Peck has been mysteriously creeping around the alternative country music scene for the past five years since the release of his dark and brooding first singles — “Big Sky” and “Dead of Night” — which showcased the singer’s capability to take listeners to the quaint, vintage western town of their dreams. Peck is a dreamlike character, too; his musical vision takes influences from older western voices, such as Willie Nelson and Dolly Parton, and his artistic vision portrays an invariably well-dressed, mystifying, tattooed queer cowboy. Peck himself is gay, and he proudly does not shy away from his identity, proving it is a much-needed influence on the modern country scene. More recently, after being picked up by Columbia Records, Peck’s music has become more accessible than it used to be, trading the low and slow ballads for more catchy hooks and fast choruses. Peck works well with both, knowing he is becoming more of a pop star, and plays into this through more flamboyant looks and artistic decisions.

The audience got a taste of both sides of the self-proclaimed “outlaw cowboy” last night, as Peck played a 90-minute set featuring songs from his debut album “Pony,” his EP “Show Pony,” and his most recent critically acclaimed album, “Bronco,” which features the song the singer opened the show with. As Peck’s band, dressed as if they had just returned from the saloon, took the stage, they played an instrumental overture containing songs to be played in the set. Subsequently, Peck waltzed toward his microphone. Peck was wearing what looked to be a custom-made matching suit and pants, with a bright blue and yellow floral pattern all over it. “Daytona Sand” was the opening song, and the audience cheered as Peck crooned the opening lines: “Buddy, we got major blues / Another suitcase in your hand / I hope you brought your walking shoes / ’Cause it’s quite a ways from what I understand.”

Three songs into the set, Peck gave the audience an unforgettable moment in live vocals with his “The Curse of the Blackened Eye” performance. In a moment that highlights the vocalist’s powerful falsetto, Peck dramatically motioned toward the audience as he sang the first line of the bridge: “Always said I should work on my escape.” He paused as the audience began to cheer, as most knew what was coming. He continued, “Have a heart too long, it’s bound to break.” Another pause occurred as hollering was released among the crowd. Peck then went to sing a sustained high riff on the final line of the bridge: “Acting out the opus of your last eternal ache.” As he held the riff on “ache,” there was no shortage of clapping or wooing across the crowd. Peck motioned a bow with his hand and continued back into the song’s chorus, leaving fans across The Arlington Theatre in awe.

The set continued on as the sweaty cowboy took off his jacket, revealing a white wife beater tank top, and he moved to sit stage left at his piano, ready to showcase another one of his many talents. Here, Peck started the next act of his set with a stripped-down version of “Drive Me, Crazy.” He prefaced the song with an explanation about how the story’s premise featured “truck drivers in love,” which prompted him to ask the audience if anyone was a truck driver. When a man in the orchestra section of the audience raised his hand, Peck pointed his attention toward him, giving a cheeky wink and started the song. It was humorous moments like this where Peck chuckled along with the audience that showcased parts of the singer’s genuine personality that may not come across from his albums, singles and EPs. Peck has a warm, glowing personality, and his interactions with the audience throughout the crowd created an intimate show, making attending his performance all the more special and worth the ticket price.

After closing his show with the energetic “Bronco,” the audience erupted with applause, which continued as blue lights slowly began to get brighter, hinting at an encore. After a couple of minutes of the clapping and shouting, Peck and his band returned, and the singer explained that he always closes his shows with the specific song he was about to play. He explained that if one had ever been to his shows, they had been inducted into the club to see the iconic westerner live. Inducting us all into this club, Peck began to play “Take You Back (The Iron Hoof Cattle Call).” The high tempo, rumpus, honky-tonk tune had everyone back on their feet, clapping along to the beat. Glowing smiles were visible across the audience as Peck closed out the show by thanking the audience, and his band continued the uptempo playout. For fans and newcomers alike, Peck gave a reason to add more of his music to audience members’ playlists in a desire to bring back the evening where they witnessed the show of a lifetime.

Sounds fantastic! Love Willie and Dolly, and their duet “Everything’s Beautiful (In Its Own Way)” – bought the vinyl 45 in 1981.