The Daily Nexus
Reviews
Plant-Based/Keto Ice Cream: A History and Review
May 5, 2022 at 9:00 am by Abigail Monti 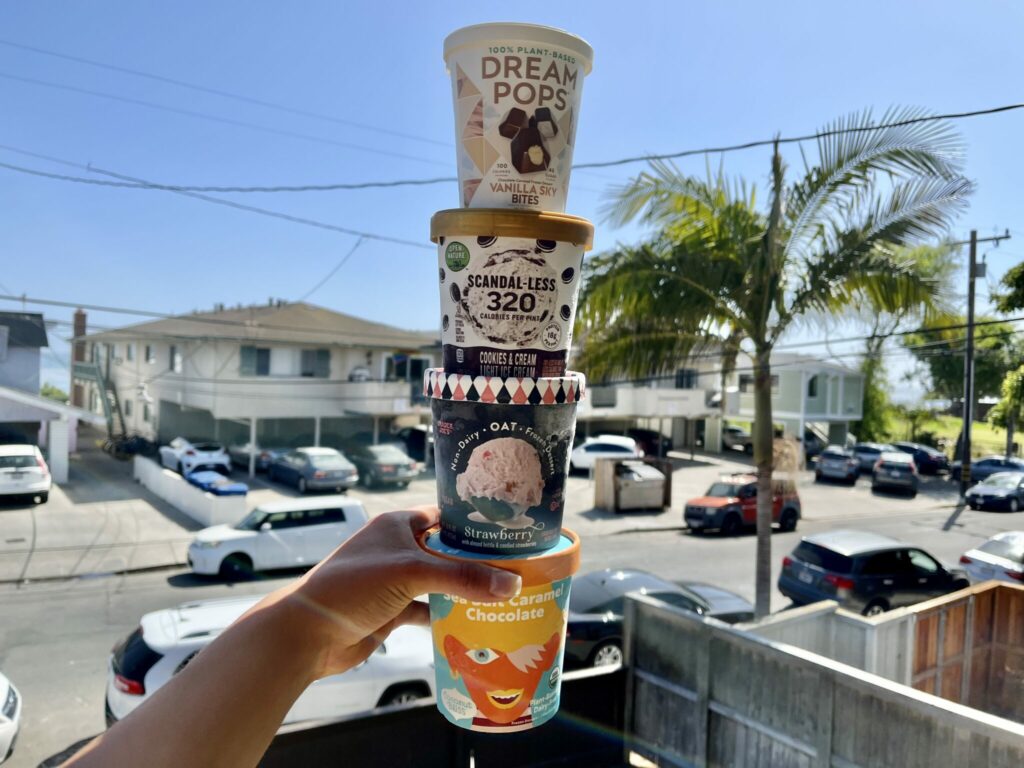 If you’re a big fan of the freezer aisle like me, you’ve probably noticed that plant-based and “healthier” ice creams are taking over the frozen dessert market. For better or for worse, these newer versions of the original dairy product seem to be here to stay.

Though the popularity behind plant-based ice cream has skyrocketed in recent years, there’s a long history backing it up. In fact, the first record appears in an 1899 nut-based cookbook by Almeda Lambert, and consisted of nut cream, sugar and vanilla. Though the concept stayed the same, later confectionists continued experimenting with different dairy substitutes — particularly soy. In 1922, Lee Len Thuey of Indiana was issued the first patent for a tofu-based soy ice cream. The first commercial soy ice cream, produced by the Scientific Food & Benevolent Association and Henry Ford’s research team, hit the market in the 1930s.

In the 1950s, vegan ice cream hit a hurdle when the U.S. Food and Drug Administration ruled that Chill-Zert soy ice cream should instead be labeled as “imitation ice cream.” However, Robert Rich, the founder of Rich Products Corporation, fought the ruling and eventually won, which prevented nondairy ice cream from being marginalized from the greater ice cream market.

In light of this victory, the late 20th century saw a handful of new dairy-free ice cream companies, including the still prominent brands Tofutti and Rice Dream. By the turn of the century, the popularity of dairy-free ice cream began to soar, and it continues to grow each year. The global dairy-free ice cream market size was valued at $595.26 million in 2021, and Forbes predicts it will surpass $1 billion by the year 2025.

A few factors spurring the rising interest in vegan ice creams, among plant-based foods in general, are consumers’ lactose-intolerance and health concerns over dairy, and the shift toward sustainable substitutes for animal products and “better-for-you” trends. Helping the market grow are established dairy brands launching their own vegan ice cream options, including Häagen-Dazs, Breyers, Ben & Jerry’s, Baskin-Robbins and Magnum.

Plant-based and keto-friendly ice cream options hold the upper hand in health and environmental impact, but the factor of taste should not go overlooked. I went to my local grocery stores and picked out four options to determine whether they can compare to traditional dairy ice cream.

This oat-based version was uber creamy and imitated ice cream well, but the strawberry flavor was barely there. Combined with the oat undertones, it weirdly reminded me of a liquid version of strawberry mochi — interpret that as you will. I probably wouldn’t buy it again. Rating: 3/5

This one was made out of a coconut milk base, and a coconut flavor permeates the whole thing. Surprisingly, the combination of coconut and sea salt caramel wasn’t too off-putting. This was the densest one I tried, but it still managed to be creamy. The best part in my opinion, though, was that it had vegan chocolate bits mixed in. Honestly, my biggest grievance was how salty it was. Usually, I’m a huge salt enthusiast, but this was way too much. Rating: 4/5

This was the only non-vegan and keto-friendly option I tried. The first thing I noticed was how light it was. Due to the skim-milk base, it’s way more aerated than regular ice cream and is borderline icey instead of creamy. However, since it is made of milk, it lacked any odd oat or coconut aftertaste. I can definitely understand the popularity behind this one. Rating: 4/5

These coconut-milk based ice cream bites were covered in chocolate, so they resembled a vegan version of Dibs rather than regular ice cream. I thought the taste was spot-on accurate to vanilla ice cream, if only a little more icey than creamy. It may help that the vegan chocolate covering helped disguise the lack of dairy, but either way I loved it. Rating: 5/5

Notably, all these choices all cost around $4, which is pretty cheap in comparison to $6 pint of Ben & Jerry’s. For that reason alone, I might consider making the permanent switch! No matter what is fueling your interest in vegan- and keto-friendly ice creams, I encourage you to give them a try — with dozens of brands and flavors on the market, you’re bound to find one you love.