The Daily Nexus
Sports
Gauchos Sweep Rivals in Three-Game Weekend Series
May 5, 2022 at 9:01 am by Preston Espar

After losing a 3-game win streak against the USC Trojans last Tuesday, the UC Santa Barbara Gauchos were quick to get another one as they swept their Big West rival, the Cal Poly Mustangs. The sweep has more distance between the Gauchos and the rest of the Big West with 6 games now separating UCSB and the next closest team, the Hawai‘i Rainbow Warriors. 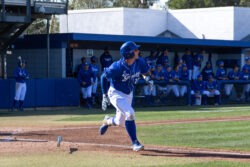 The Gauchos traveled to San Luis Obispo days after a 13-7 defeat to USC. The two conference rivals were neck to neck and a Cal Poly series win could have changed the momentum for the rest of the season. With this context in the mind of both teams, the first game of the series was a contested one. At first, it seemed as if the Gauchos were going to continue their season-long dominance as it was a 3-0 game by the end of the 2nd inning. However, the Gaucho bats went quiet after the inning, until the Mustangs had a 3-run inning of their own. UCSB quickly struck back in the top of the 7th with a solo home run courtesy of senior catcher Gianni Bloom. Again, Cal Poly tied the game in the next inning, and things stood at 4 runs apiece going into the 9th. Both offenses began to explode as an RBI triple from Bloom and a 2-run shot by junior infielder Blake Klassen put UCSB up 7-4. However, the Gauchos played a sloppy bottom of the 9th, as 2 errors led the Mustangs to a 3-run game-tying inning. The Gauchos scored the final runs of the game in the 11th inning by scoring 3 runs via another home run by Klassen and a sophomore infielder Nick Oakley double. With these runs, UCSB set the tone for the series with a 10-7 extra-inning victory.

The next day, the game was not as competitive. After scoring a single run in each of the first 3 innings, Cal Poly’s offense sputtered as UCSB began to take over. The Gauchos quickly cut down the lead with a 2-run 4th inning with RBIs from senior outfielder Jason Willow and Oakley. Then, UCSB’s best inning of the game came in the 6th, as the Gauchos took the lead for good with 2 RBIs from sophomore infield Jordan Sprinkle and an RBI single from redshirt junior infielder Bryce Willits. UCSB refused to take their feet off the pedal as they scored 3 runs in the final inning to make the final score 8-3. With the victory, the Gauchos created more separation between the two teams as Hawai‘i was able to leapfrog the Mustangs in the standings.

The final game was similar to the second, as UCSB blew out Cal Poly to close out the series. Again, the Mustangs were the first to score as they tacked on a single run in the 1st inning. However, UCSB was able to strike back immediately with a run of their own in the top of the 2nd. After another single-run inning by Cal Poly, the offense went quiet for both sides until the 7th inning. From the 7th inning to the 9th, the Gauchos scored 6 runs against the Mustangs’ 1 to put the game away. The 7-3 UCSB victory secured the series sweep for the Gauchos and put them in the driver’s seat for first place in the Big West.

The Gauchos will look to keep their winning streak alive with a single home game against Pepperdine University and then will travel to Orange County to take on the UC Irvine Anteaters in hopes of strengthening their conference record.

A version of this article appeared on p.7 of the May 5, 2022 print edition of the Daily Nexus.