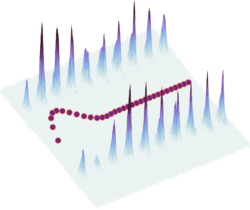 The dots in the center represent the average momentum of the wave packet at a given point on the time axis, which runs left to right. (Courtesy of Roshan Sajjad)

In the normal world of classical mechanics, objects do not independently return to their origin after being thrown. However, one particular object — a boomerang — does demonstrate this behavior, a behavior so rare that it functions as a verb: to boomerang. In the not-so-straightforward world of quantum mechanics, many objects have been theorized to demonstrate this boomerang-like behavior. No scientist has observed such a phenomenon — until recently.

The Weld Group at the UC Santa Barbara Department of Physics has recently published their results demonstrating the first observation of the “quantum boomerang” effect. In their experiments, they saw a quantum wave packet return to its origin a short time after being “kicked” by an external force. A wave packet is the quantum-mechanical, probabilistic description of how likely you are to find a particle at a particular place and time. For the Weld Group, their wave packet is a Bose-Einstein condensate (BEC) of lithium atoms: an assembly of 100,000 atoms held at a temperature of 10 billionths of a degree above absolute zero.

Four more highly complex cooling steps are then completed to create the BEC. “[We] blow off the hottest atoms. Similar to how … your coffee gets cold. The steam carries the hottest atoms [and the system gets colder],” Roshan Sajjad, a graduate student researcher at the Weld Group and first author of the paper, said. By the end, the researchers have their BEC of lithium atoms held in a strong electromagnetic field trap, which they use for their quantum boomerang experiments.

To measure the boomerang, the lab had to let go of their hard-earned BEC and let it fly. By stopping the lasers from generating the strong electromagnetic trap, the BEC was free to move around. However, after the trap is lifted, a second laser pulse comes in to provide the “kick” that Sajjad mentioned earlier. The group called this scheme for nudging the BEC packet the “quantum kicked rotor.”

Similar to a surfer catching a wave at the different parts of a swell, the BEC wave packet will move at different speeds depending on where the second laser gets kicked on its wavefront. While varying where on the wavefront the BEC was kicked, the researchers measured the behavior of the wave packet’s momentum.

The Weld Group measures the momentum of their BEC by taking snapshots of the atomic clouds after a known amount of time. This measurement is called a “time-of-flight” experiment. By knowing how much time the atoms have had to move from the central trap, the Weld Group can use the measured locations of the atoms to resolve their velocity. “If I took an image [after the strong laser trap was released], it would just look like a blob because the momenta haven’t had time to do anything,” Sajjad said. “But once you undergo this time-of-flight, [you can measure the momentum of the system].”

When the group kicked the BEC at a particular time, at half the period of the quantum kicked rotor, the momentum of the BEC averaged to zero after a few kicks. This was the first demonstration of the quantum boomerang effect, and the Weld Group hopes to use their apparatus to create more complicated systems which host the phenomenon. By engineering more complicated systems that either host or destroy the effect, the lab aspires to probe some of the fundamental features of quantum mechanics of many particles. The quantum boomerang was only theorized to exist a few years ago but relies on the fundamental principles of quantum mechanics that have been the bedrock of modern physics for decades. Such a quick observation of the boomerang by the Weld Group opens a new line of experimentation that probes at newly emerging predictions that seek to either confirm or deny long-held assumptions of the quantum mechanics for many particles.