UC Santa Barbara’s Resource Center for Sexual and Gender Diversity held its Trans+ Week of Visibility Resource Fair on April 22 outside the Student Resource Building, where over 11 departments tabled and four events took place: an out in Science, Technology, Engineering, and Mathematics art event, a Health and Wellness dog therapy booth, a clothing swap and a gender-affirming silent auction. 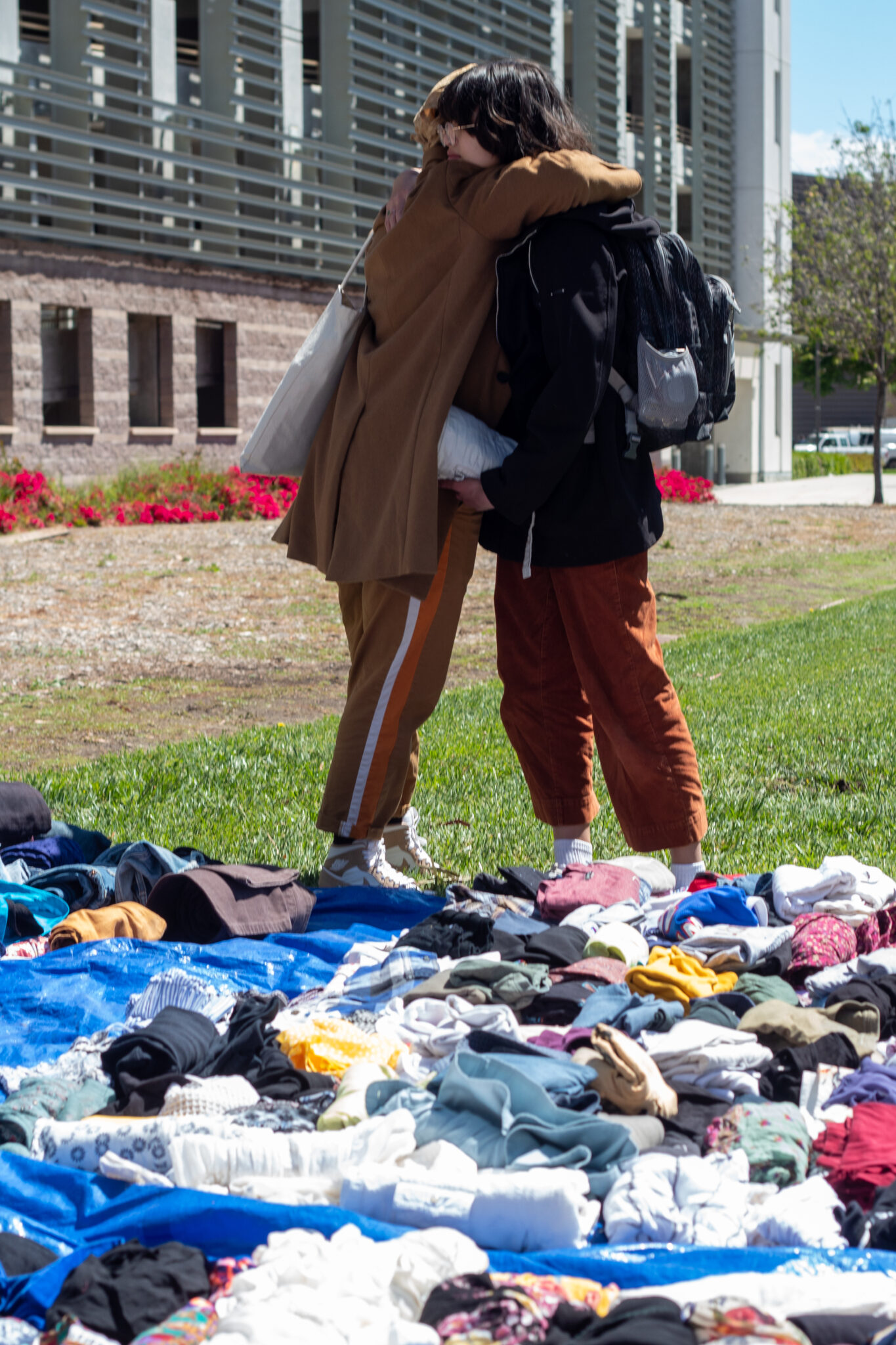 The fair wrapped up the Resource Center for Sexual and Gender Diversity (RCSGD)’s annual Trans+ Week of Visiblity — a week full of events hosted by RCSGD to celebrate transgender joy and visibility.

Organizing for the resource fair and other events during Trans+ Week of Visibility began during winter quarter, when the committee met regularly to discuss the events it wanted to plan and identify the departments it wished to collaborate with.

Although International Transgender Day of Visibility was on March 31 this year, Buchanan said that RCSGD hosted Trans+ Week of Visibility during the week of April 18 due to concerns of instruction possibly being remote during the first two weeks of spring quarter.

Buchanan said that the resource fair marked the “grand finale” of the week’s events, with around 110 attendees engaging with its activities.

“We wanted to make one really big event that combines a bunch of different things so people can do them all in one space, and that ended up being the resource fair,” Buchanan said.

“We had a series of events throughout the week, and we wanted to end it with just a celebration of the amount of trans-affirming resources there are on campus,” Rioz said.

Out in Science, Technology, Engineering, and Mathematics (oSTEM) — an organization aiming to support LGBTQIA+ individuals and allies in their pursuit of S.T.E.M. fields — also had a booth where they planned science-based art events for participants to enjoy.

“They were making rainbow jars with a density of different dyes and liquids. They had an activity where you had to make Pringles into a circle and they made oobleck, which is a non-newtonian fluid,” Buchanan said.

Another booth offered dog therapy in collaboration with UCSB Health and Wellness.

“I was actually surprised because usually the dog therapy events at UCSB are absolutely crowded. It it wasn’t too busy, which was nice because people got to spend a lot of time with them and hang out with them,” Buchanan said.

A silent auction called a Gender Affirming Items Drawing was held, the proceeds of which went toward providing gender-affirming grants to trans and nonbinary students to promote comfortability in themselves in everyday life.

“It was a silent auction where the pieces were donated from the community,” Rioz said. “Folks from the LGBT[QIA+] community, other trans people, other staff and faculty that wanted to support trans folks, and we even got jewelry donated from a middle school in Goleta.”

Another feature of the event was the clothing swap, which allowed students to take gender-affirming clothing donated from the community since March of this year for free. Buchanan spoke to the importance of providing free clothing for transgender and nonbinary people, as clothing is often a difficult yet fundamental part of outward presentation.

“Clothing is a huge way that you express your gender presentation, and when you first come out or even as you’re trying to figure out what gender really looks like to you, clothing might not be super accessible,” Buchanan said.

Buchanan further stated that the clothing swap was an opportunity for students to find clothing pieces without the barriers of gender separation that is typical in retail stores.

“Going to stores that are separated by gender is kind of a scary experience for a lot of people, especially if you don’t pass,” he said. “There were no gendered sections on the giant tarp of clothing [at the swap], and people were able to come by, and there were no obstacles they had to jump through — it was just simply free clothes.”

Rioz said that the resource fair was a culmination of the progress made in expanding and increasing visibility of transgender resources at UCSB, especially in light of remote learning from COVID-19.

“Even a year ago, there were very few resources specifically for trans folks on campus, and we’ve worked really, really diligently as the center to build and create these resources that are transforming,” they said. “We really took COVID-19 to build out some of these resources.”

Rioz added that the resource fair was a physical reminder of how many departments and groups on campus care about transgender and nonbinary students in providing community and resources.

“I think the big win for us was to revitalize ourselves, remember that there are so many people and departments on campus that may not be trans but deeply care about trans folks, and they will show up,” Rioz said. “It was just so fulfilling as the director of RCSGD to see that we all have a place and a larger community.”

“We deeply care about our mission to reduce barriers for queer and trans students, and just seeing so many departments show up with windy weather and share how excited they were for trans visibility and support was a highlight,” they continued.

Since returning to in-person learning, Buchanan said that there was a greater demand for support, community and resources from RCSGD.

“We’ve noticed a huge uptick in attendance of our trans-focused events … because there was a greater demand for rebuilding that community and having in-person engagement with other trans people and seeking validation,” he said.

“Having events like this, where we get to be visible, outside, not just holed up in our little private space [at RCSGD], is a statement and empowering,” Buchanan continued.

Similarly, Rioz said the resource fair was an opportunity for RCSGD to gather all of the departments, supporting groups and allies on campus for transgender students in one place.

Rioz said that, despite UCSB being a university with barriers, there are still support systems, resources and individuals who care for the success, progression and joy of transgender and nonbinary students. They said the resource fair was one of the many representations of this mission to ensure that there is a home at UCSB full of resources and support for the queer and transgender community.

“UCSB was not made for trans students, but that does not mean that they cannot be successful,” Rioz said. “We have a deep, deep devotion to serve trans and queer students … and the resource fair was another homage to our mission to strive for our vision of a center where every LGBTQ+ student, including trans and nonbinary students, have everything that they need to be successful in their endeavors at UCSB, both professionally, personally and academically.”