The Daily Nexus
Sports
Gauchos Sweep Series Against the Tritons
April 25, 2022 at 7:26 pm by Gabriel O'Brien

This Easter weekend saw the UC Santa Barbara men’s baseball team take on their Big West rival, the UC San Diego Tritons, at home in the Caesar Uyesaka Stadium. The Gauchos, already coming off of a three-game win streak on the road against the Cal State Northridge Matadors, were looking to continue the trajectory of success here at home. With a sizable audience each day, the fans were rewarded with a Gaucho win each game of the series. 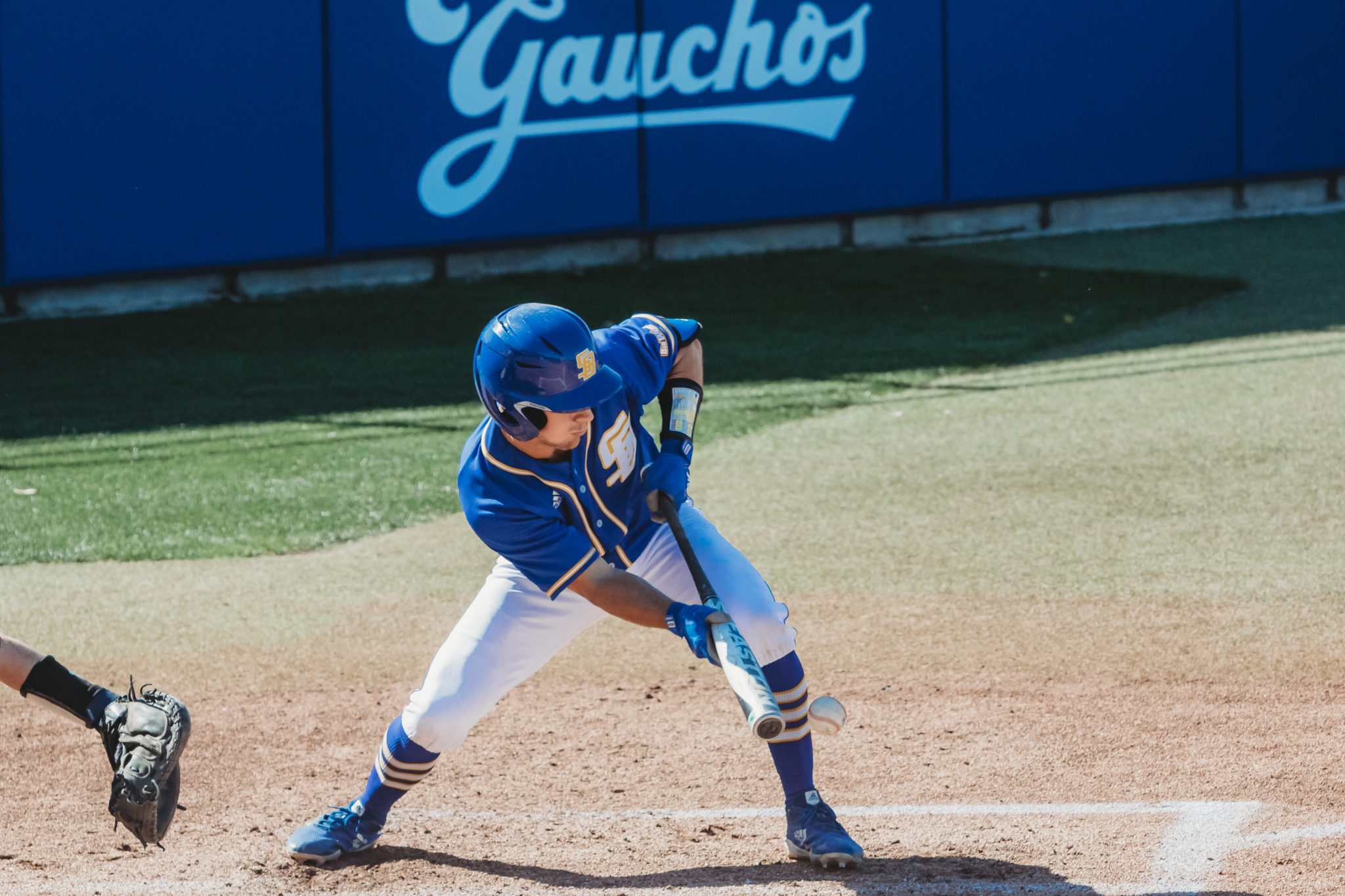 The Thursday opener started off a little shaky. By the 2nd inning, the Tritons had the bases loaded and were already back to the start of the batting order. By the next inning, the Tritons’ senior catcher Blake FitzGerald knocked out a 2-run homer, and San Diego took the lead. This early lead boosted the confidence in the Tritons’ dugout and cast a pall of silence over the stands. This didn’t last for too long though, as the Gauchos took a 3-2 lead by the end of the 4th inning. And even when the lead went back to the Tritons briefly, the Gauchos had an explosive 5th inning. When the score was tied at 4-4, sophomore outfielder Broc Mortensen knocked a 3-run dinger all the way out of the park. Mortensen – a transfer who used to be a running back for Cal Poly’s football team – has already hit 9 home runs this season and has a slugging percentage nearing .600. Once the Gauchos got this boost of confidence, the lead remained firm, and the boys brought home a 10-6 win by the end of the night.

Friday provided more excitement and 10 more runs by the home team. Just as in the last game, the Tritons took an early lead in the 2nd inning, but this was interrupted with 3 straight scoring innings for the Gauchos from the 4th to the 6th. In fact, in the bottom of the 5th, the Gauchos scored 6 runs by routinely keeping the bases loaded, scoring a series of RBIs. Luckily, the Gauchos’ offensive success was aided by a strong pitching performance by sophomore Nick Welch, who earned the win – his first in the conference – with 8 strikeouts in a mere 4 innings.

Finally, the afternoon game on Saturday provided the most thrilling feat of the whole series. The Tritons, hoping to recalibrate after losing in 2 straight near-blowouts, put up a good fight — with the final score being a nail-biting 8-7 in favor of the Gauchos. In what was a back-and-forth slugfest between the two opponents, UCSB took an early 3-0 lead, which was quickly matched by the Tritons. Although UCSB never gave up their lead, it was not an uncommon sight to see both teams tied up at the end of an inning. At the end of the day, the batting lineup came to the rescue for the Gauchos and aided them in sweeping the series. Every batter on the lineup made at least one base hit; 5 batters earned an RBI, and three Gauchos hit a home run. By the time the bottom of the 8th came around, it looked as if extra innings was not an impossibility — as the score was 6-6. But when junior infielder Kyle Johnson hit an RBI single to right field, sending both junior utility player Christian Kirtley and senior fielder Jason Willow home, the Gauchos clinched the win. The Tritons scored in the top of the 9th, hoping to force a Gauchos at-bat, but with 2 outs when the run was scored, it was too late. The Gauchos secured the hard-fought win and swept the series — setting them up well for their upcoming home series against UCLA.