The University of California Student Association held a press conference on Monday as part of their Double the Pell Week of Action to campaign for doubling the amount of aid given by the Federal Pell Grant Program. 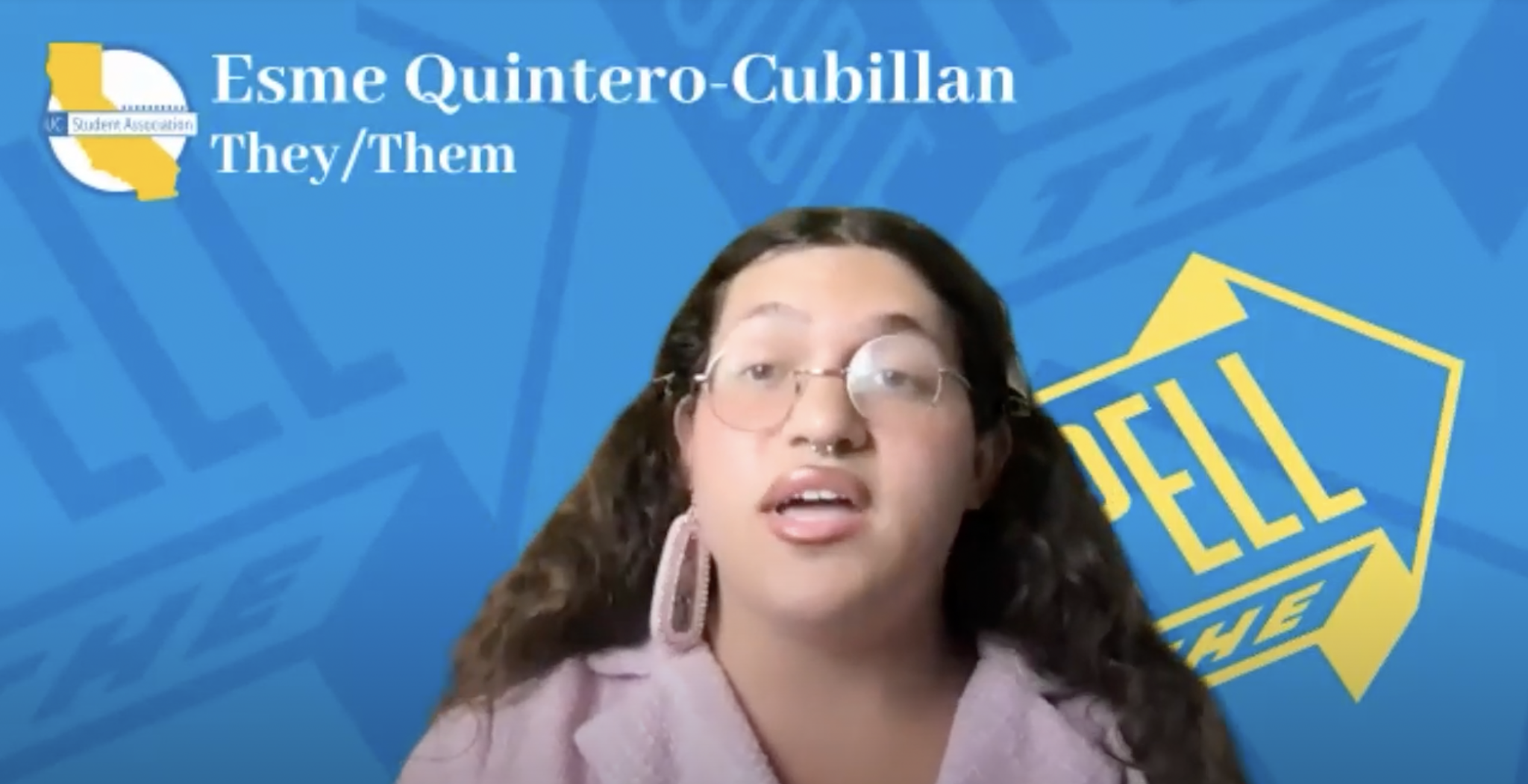 Quintero-Cubillan said that the Pell Grant has personally aided them through their experience in California college systems. Courtesy of UCSA

The Double the Pell campaign occurs nationwide and is spearheaded by the UC Student Association (UCSA) across the state of California.

“The journey to double the Pell Grant didn’t start this year,” Quintero-Cubillan said. “This has been an ongoing battle to make college more accessible and affordable for all of us, starting at our margins and working ourselves inward to ensure that the UC, the CSU [California State Universities] and universities and education across the United States are accessible to everyone.”

Quintero-Cubillan said that the Pell Grant has personally aided them through their experience in California college systems.

“In the five years I’ve been a student, both in the UC and in the California Community College System, I’ve faced housing insecurity, I’ve been a homeless student and I’ve gone through food insecurity,” they said. “But the Pell Grant has always worked to make sure that the dream that I have of pursuing education and being able to get my degree and move up in life was always accessible.”

Quintero-Cubillan noted that the recent $2,175 increase to the Pell Grant proposed by President Joe Biden is indicative of progress and will act as a “down payment” toward a hopeful larger increase. Pell Grant amounts differ by year, and the maximum award for the 2022-23 year — from July 2022 to June 2023 — is $6,895.

“Doubling the Pell Grant is … what we need to do to ensure that the future of education is accessible for all and not just those that can afford it because they come from wealthier backgrounds,” Quintero-Cubillan said.

“At the CSU, 41.6% of our student population experience food insecurity, and 10.9% of our students are homeless. While the cost of higher education has risen over the years, the maximum award for the Pell Grant has not,” Malhotra said.

Malhotra said that, along with doubling the Pell Grant, the movement calls upon Congress to include a proposal in the 2023 federal fiscal year budget that extends Pell Grant eligibility to students who are Deferred Action for Childhood Arrivals (DACA) recipients.

“President Biden’s administration has consistently stated its support to extend the Pell Grant to DACA recipients, and we hope that this can be included in the appropriations process,” Malhotra said.

Following Malhotra, Vice President of Legislative Affairs for the Student Senate for California Community Colleges Jasmine Prasad spoke. In her speech, she emphasized the vast number of community college students who are reliant on the Pell Grant, many of them being nontraditional students as well.

Prasad added that the grant is crucial to making UCs and CSUs affordable to transfers coming from community colleges.

“We want to ensure that there’s an equitable pathway for community college students and that they’re confident and have the financial needs to transfer out and continue their education,” Prasad said.

Jonathan McNicholes — the state chair of Students United, a nonprofit organization that officially represents Minnesota State University students — spoke after Prasad, describing how the Pell Grant was instrumental in providing him with the financial means to complete his undergraduate education.

“When I first started my education at Bemidji State University in northern Minnesota, I actually didn’t receive Pell Grants, and I was taking out over $7,000 in credit card debt just to pursue my education,” McNicholes said. “Thankfully, due to a recalculation of my student loans, I was able to finally actually qualify for Pell Grant, and [it] changed my life … due to that Pell Grant, I was able to go on and complete both bachelor’s degrees.”McNicholes said Students United lobbies in Washington D.C. every year for student issues, and during this year’s meetings with representatives, he observed a strong recognition of the Double the Pell Campaign.

“We saw the Double the Pell movement being referenced in almost all of our meetings, across all of our representatives and senators, and that really shows the progress that this movement as a whole is making and that our voices are being heard,” he said.

To wrap up the speakers, UCSA Fund The UC Campaign Vice Chair Bailey Henderson gave closing remarks, emphasizing the goals of the Double the Pell campaign.

“In a 2017 UC basic needs poll, the UC discovered that 44% of students face housing or food insecurity … at some point in their college career,” Henderson said. “Today, the [Pell Grant] program only covers 29% of tuition costs, when back in 1975, it covered 75%. Doubling [the grant] is essential to those students who have faced basic needs issues, students of color and undocumented students.”

Henderson encouraged attendees to get involved on their campuses, contact their legislators and make their voices heard in favor of doubling the Pell Grant.

“This week of action is centered on the idea that we, as students, need to stand up and advocate for this issue,” Henderson said. “This is an amazing campaign that will do so much for students who desperately need access to the education that they wish to pursue.”