United States Vice President Kamala Harris joined Congressman Salud Carbajal and Senator Alex Padilla at the Vandenberg Space Force Base in Lompoc on April 18. Speaking before members of the U.S. Space Force — known as Guardians — Harris announced that the United States will become the first nation to commit to not conducting missile launches targeting satellites in space. 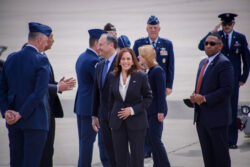 From there, the vice president was taken via motorcade to a private briefing at the Combined Space Operations Center, followed by a private meeting with service members and their families.

Around 4:40 p.m., a series of speakers took the stage at a warehouse on the Vandenberg base to highlight the importance of the Space Force, along with its ties to the central coast. Among the speakers include Carbajal, Padilla, Deputy Secretary of Defense Kathleen Hicks and Harris.

In her speech, Harris outlined the importance of the United States Space Force, citing its efforts to clear dangerous debris left by a Chinese anti-satellite missile test in 2007.

“I just received a briefing from the 18th space defense squadron, and their work is incredibly impressive,” Harris said. “So far, the 18th has identified more than 1600 pieces of debris from the Russian test. This debris presents a risk to the safety of our astronauts, our satellites and our growing commercial presence.” 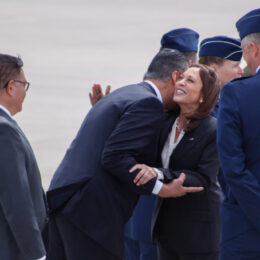 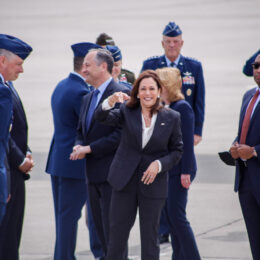 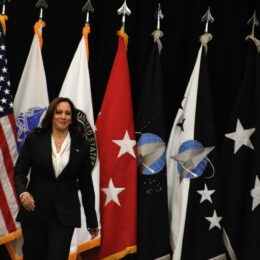 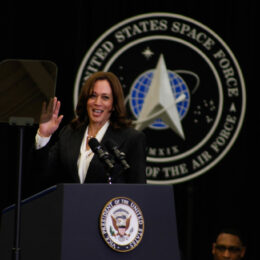 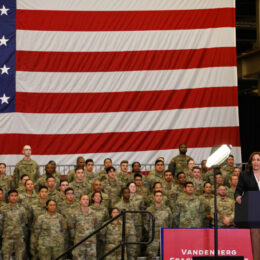 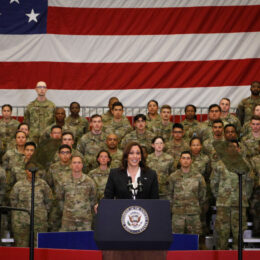 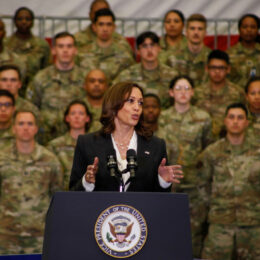 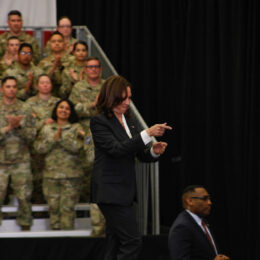 Harris discussed how the United States is setting new norms around how countries conduct themselves and utilize space, announcing the United States’s intention to ban the launching of missiles targeting satellites in space, and said the current administration will undertake the work of encouraging other countries to follow their lead.

“We have consistently condemned these tests and called them reckless, but that is not enough. Today, we are going further. I am pleased to announce that as of today, the United States commits not to conduct destructive direct ascent anti-satellite missile tests. Simply put, these tests are dangerous and we will not condone them,” Harris said.

“We are the first nation to make such a commitment. And today, on behalf of the United States of America, I call on all nations to join us whether a nation is spacefaring or not,” she continued. “We believe this will benefit everyone, just as space benefits everyone. In the days and months ahead, we will work with other nations to establish this as a new international norm for responsible behavior in space.”

During his speech, Carbajal recognized the importance of Vandenberg’s location and said that the central coast is preparing to accelerate the work being done on the base.

“We’re getting ready for the potential doubling of launch rates over the next five years and we’re getting ready, if and when Space Force calls, to make Vandenberg the new headquarters of STARCOM [Space Training and Readiness Command],” Carbajal said.

Senator Padilla said that the Vandenberg space force base will be a 21st century leader in space operations.

“I not only see how strategically perfect Vandenberg is for this and other missions, because of how geographically close it already is to cutting-edge aerospace technologies, not to mention some of the world’s top universities are located here as well,” Padilla said. “I know everyone here had a chance today to see how Vandenberg can and will be a leader in the 21st century space operation.”

The Biden/Harris administration pledged $27.6 billion to the United States Space Force for the 2022-23 fiscal year. According to Hicks, this is the largest amount of space military spending of any administration.

“It funds two more GPS satellites and invests in the development of secure survivable satellite communications and funds the Defense Department’s transition to a new resilient missile warning and missile tracking architecture. All nations on earth benefit from space,” Hicks said.

Harris also addressed the role of the Space Force as the Biden/Harris administration navigates Russian aggression toward Ukraine.

“As we have seen in Ukraine, Russia has completely violated the set of international rules and norms established after World War Two, which [had] provided unprecedented peace and security in Europe,” Harris said. “In the face of Russian brutality, worlds come together to say these roles, and these rules and norms must be upheld. I’m heartened to see such a strong affirmation of their importance.”

“At the same time, our administration is working to establish new rules and norms for the new challenges of the 21st century — areas like emerging technologies, cyber security and, of course, space,” she continued.

Harris left the base at approximately 6 p.m. to attend a Democratic National Committee fundraiser in Los Angeles.