After losing 2 straight games to University of Hawai’i and Pepperdine University, the UC Santa Barbara baseball team has strung together a 3-game winning streak with a sweep against the Cal State Northridge Matadors. With the 3 wins, the Gauchos now have a conference record of 10-2 which is good enough for first overall in the Big West. The overall record for the team currently stands at 21-8. 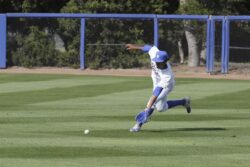 With his strong play in the series, freshman right-handed pitcher Ryan Gallagher was named Big West Pitcher of the Week. In his lone start of the series and the final one overall, Gallagher pitched 8 innings, a career-high, and gave up 1 run in the 7-1 victory. Gallagher also allowed 4 hits and 4 walks in addition to striking out 5 batters.

The 7-1 victory was not very close, but the previous 2 games between the Gauchos and Matadors were. In the first game of the series, both offenses were firing on all cylinders. The teams combined for 6 home runs and 22 RBIs in the 13-10 UCSB victory. Cal State Northridge (CSUN) opened up an early lead as they were up 2-0 after the second inning. Immediately after, the Gauchos tied the game up at 2 runs apiece. After this, the game went back-and-forth with the Matadors leading by up to 3 runs. With the score tied at 8-8, the Gauchos exploded for 4 runs in the eighth inning. CSUN was only able to score 2 more runs in the rest of the game, with the Gauchos taking the opening game of the series.

The next day saw another contested matchup with a 2-run game. This time, it was UCSB who jumped out to an early lead. Before the Matadors could score a run, UCSB had already built a 7-0 advantage. For the rest of the game, the Matadors chipped away at the lead as UCSB scored 2 more runs the rest of the way. After the Gauchos acquired their 7-0 lead, CSUN went on a 7-2 run and had a chance to tie it or win it in the ninth inning. However, the Matadors were unable to score as UCSB took the second game of the series with a 9-7 victory. Only 2 home runs were hit in this matchup, but both teams were able to make good contact with the ball as both teams combined for 10 doubles.

With a 3-game winning streak in hand, the Gauchos will look to continue their winning ways in their next series. UCSB will return to Santa Barbara for 7 straight home games starting on Thursday. The Gauchos will first have a 3-game series with UC San Diego and will then play a single game against UCLA. To end the homestand, UCSB will partake in a 3-game series against Long Beach State.