The Daily Nexus
Reviews
“Say Cheese!” Vegan Cheese Alternatives at the I.V. Food Co-op
April 14, 2022 at 9:00 am by Yuriko Chavez and Haydin Zogaric 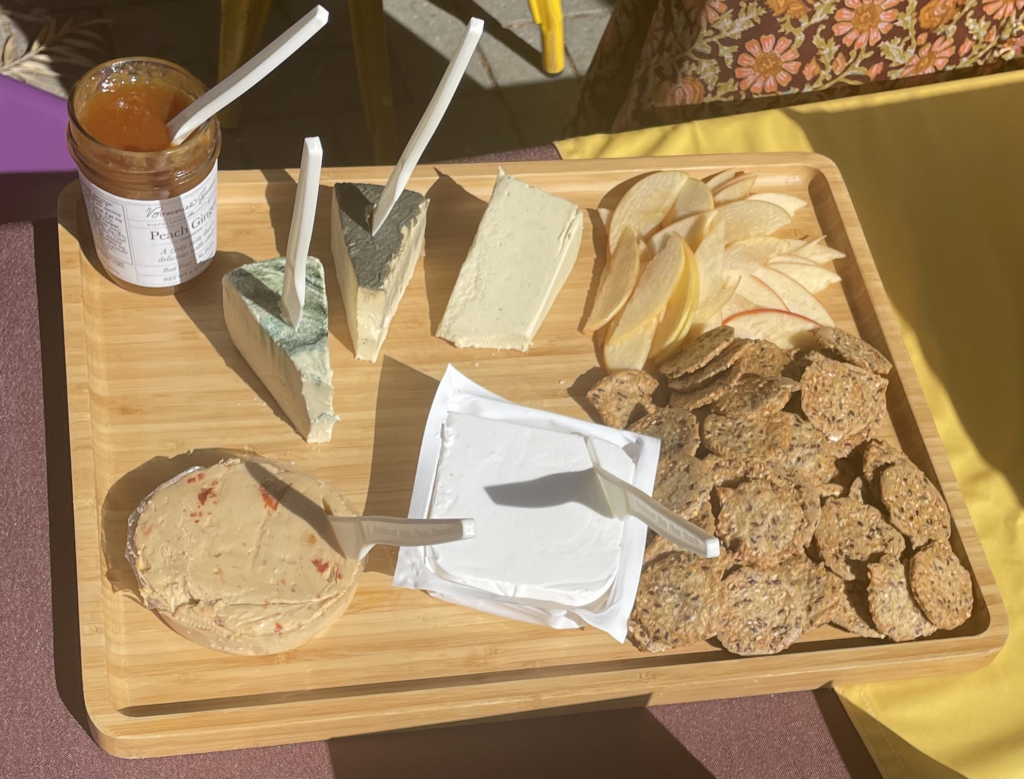 In recent years, vegan fare has been taking over the culinary world.  From Impossible meat to various milk substitutes, plant-based food products are on the rise. To most non-vegans, these meat and dairy alternatives may seem unnecessary, or perhaps even intimidating. However, switching to vegan alternatives is beneficial in numerous ways; it’s healthy, environmentally friendly and prevents animal harm. On April 6th, the Isla Vista Food Cooperative hosted a vegan cheese tasting for vegans and non-vegans alike.

Allison Baymiller, the marketing and outreach manager of the I.V. Food Co-op, as well as a UC Santa Barbara alumna, led the event. She stated that the reason the Co-op decided to promote vegan cheeses instead of dairy cheeses is “because of the variable environmental impact where there’s a really high land and water usage associated with sustainable dairy cow raising.” Vegan cheese is most often made from cashews, which provides a creamy, nutty taste, and is fermented to simulate the sharp, aged flavor of dairy cheese. She elaborated on the positive environmental impact of vegan cheese, while also acknowledging that cheeses made from nuts can also have a large water-consumption and issues with fair trade. “There’s some of that to consider as well with environmental and social impact,” Baymiller said. “But there’s still a lot less animal use associated with vegan cheese.” 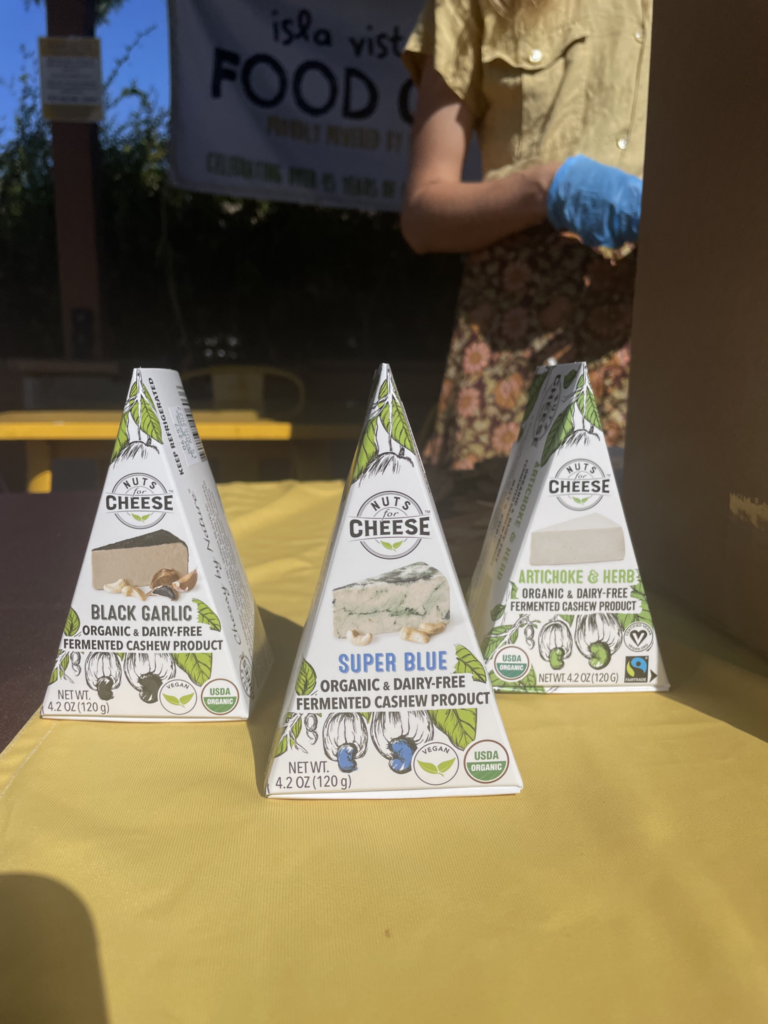 The I.V. Food Co-op is currently highlighting Nuts for Cheese, a UK-based vegan cheese company specializing in artisanal, dairy-free cheeses. First on the list is their “Super Blue” cheese — a semi-firm wedge of aromatic bleu cheese layered with spirulina, or blue algae, to create that classic blue look.

Y: Blue cheese is actually one of my favorite cheeses! Admittedly, I was a little bit skeptical if vegan cheese could completely capture its thick crumbly character and sharp aftertaste. However, I was so pleasantly surprised that “Super Blue” was rich, creamy, aromatic and had a nice pungent punch reminiscent of that strong classic blue cheese aftertaste. The main component that differed from dairy cheese was that it wasn’t as crumbly, instead taking on a similar consistency to a hummus spread. Rating: 5/5

H: Although blue cheese is not my personal favorite, I enjoyed trying this cheese and would recommend it to those hesitant toward eating the penicillium, or edible mold, on blue cheese made with dairy. “Super Blue” is exactly what I would expect from a blue cheese, from the distinct pungency to the creamy texture. It would be a good substitute for blue cheese in any traditional recipe, such as a fresh Cobb salad or a creamy blue cheese dressing or dip. Rating: 2/5

The “Black Garlic” flavor from Nuts for Cheese is an earthy, garlicky semi-firm wedge with an activated charcoal rind.

H: I could have eaten the entire wedge of this cheese! It has a perfect amount of tanginess and a super creamy texture. The activated charcoal adds a unique, smoky depth to the cheese. However, as an enthusiastic garlic lover, I agreed that they could definitely amp up the garlic flavor. This cheese paired well with the crispy, crunchy, seed-filled “Mary’s Gone Crackers,” also sold at the Co-op! Rating: 4/5

The last flavor we tried from Nuts for Cheese was “Artichoke and Herb,” a semi-firm wedge with a nutty artichoke flavor and subtle hints of fresh herbs.

Y: This cheese had some lovely flavors; the hints of artichoke complimented the herbs nicely. It is a versatile cheese with a great balance of flavor and creaminess, and I could see it pairing well with fruits and bread. Rating: 3/5

H: In my opinion, this cheese outshined the others! I absolutely loved the mildness and subtlety of the artichoke balanced with the brightness of the lemon and basil. It’s so creamy and versatile; it would work well on any sort of cracker or bread in any context, from an afternoon snack to a sophisticated charcuterie board. Rating: 5/5

We were both highly impressed by the Nuts for Cheese collection! You would never guess that their creamy, flavorful cheeses are plant-based and dairy-free. We recommend checking out their website for more information, including a recipe page featuring upscale dishes using all of these cheeses!

The next cheese on the tasting itinerary is from Miyoko’s Creamery, which Baymiller described as “first on the scene for vegan cheese.” Miyoko’s boasts a large selection of creamy vegan cheeses, including their soft, spreadable cheese in the flavor “Double Cream Sundried Tomato Garlic.”

Y: This cheese had a bit of a different texture than the others; it wasn’t as creamy and didn’t feel as spreadable as the ones previously mentioned. I enjoyed that I could get more hints of garlic than I could in the black garlic cheese, and the thin slices of sundried tomatoes were a nice addition to the flavor. Though the flavors were nice, I feel that creaminess is a really important factor for cheese, and this to me tasted more like a style of hummus rather than cheese. Rating: 2/5

H: The sweetness of the sundried tomatoes definitely takes center stage in this cream cheese-like spread. The notes of garlic contribute a savory, robust flavor. It reminded me of Italian food, like the nostalgic smell of sauteed garlic and simmering tomato sauce. I could see it working well in a pasta dish, melted in a grilled cheese or spread on a bagel. Rating: 3/5 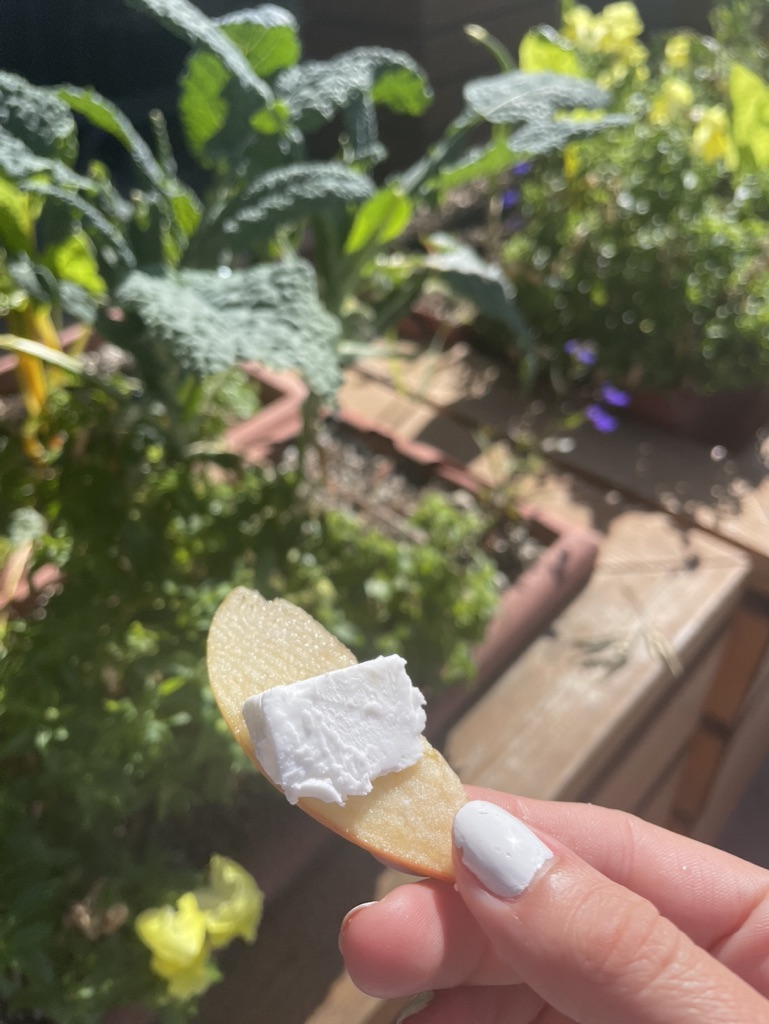 Violife, a highly praised and widely popular vegan cheese company, states that their “Just Like Feta” is a nod to their start in Thessaloniki, Greece. It’s a potato starch-based cheese soaked in a salty brine.

Y: This was personally my favorite cheese! It had such a smooth, buttery quality that wonderfully complimented a slice of apple. It wasn’t as crumbly as feta, but the taste was remarkably similar and immensely refreshing when paired with fruit. I will definitely be purchasing it, as it not only has a fresh and creamy flavor, but it’s also versatile for salads and fruits. It’s also the most environmentally friendly because it doesn’t rely on dairy or nuts. Rating: 5/5

H: Before even biting into this cheese, I could smell the familiar piquant odor associated with Greek feta. It was pleasantly sharp and bright with a delicious, creamy texture — incredibly accurate to dairy feta. It would be perfect for crumbling in a Greek salad or baked with phyllo pastry and agave nectar for an elevated appetizer. Rating: 4.5/5

Although neither of us is vegan, we thoroughly enjoyed indulging in the Co-op’s vegan cheeses. They are just as creamy, decadent and delicious as dairy cheese, while having less of an impact on the environment or animals. We encourage you to try them for yourself — pay a visit to the vegan section at the I.V. Food Co-op where you can buy all of these cheeses and more! And if you’re interested in attending the next tasting soiree, check out their Instagram page @islavistafoodcoop  where you can find updates about all their events and promotions.