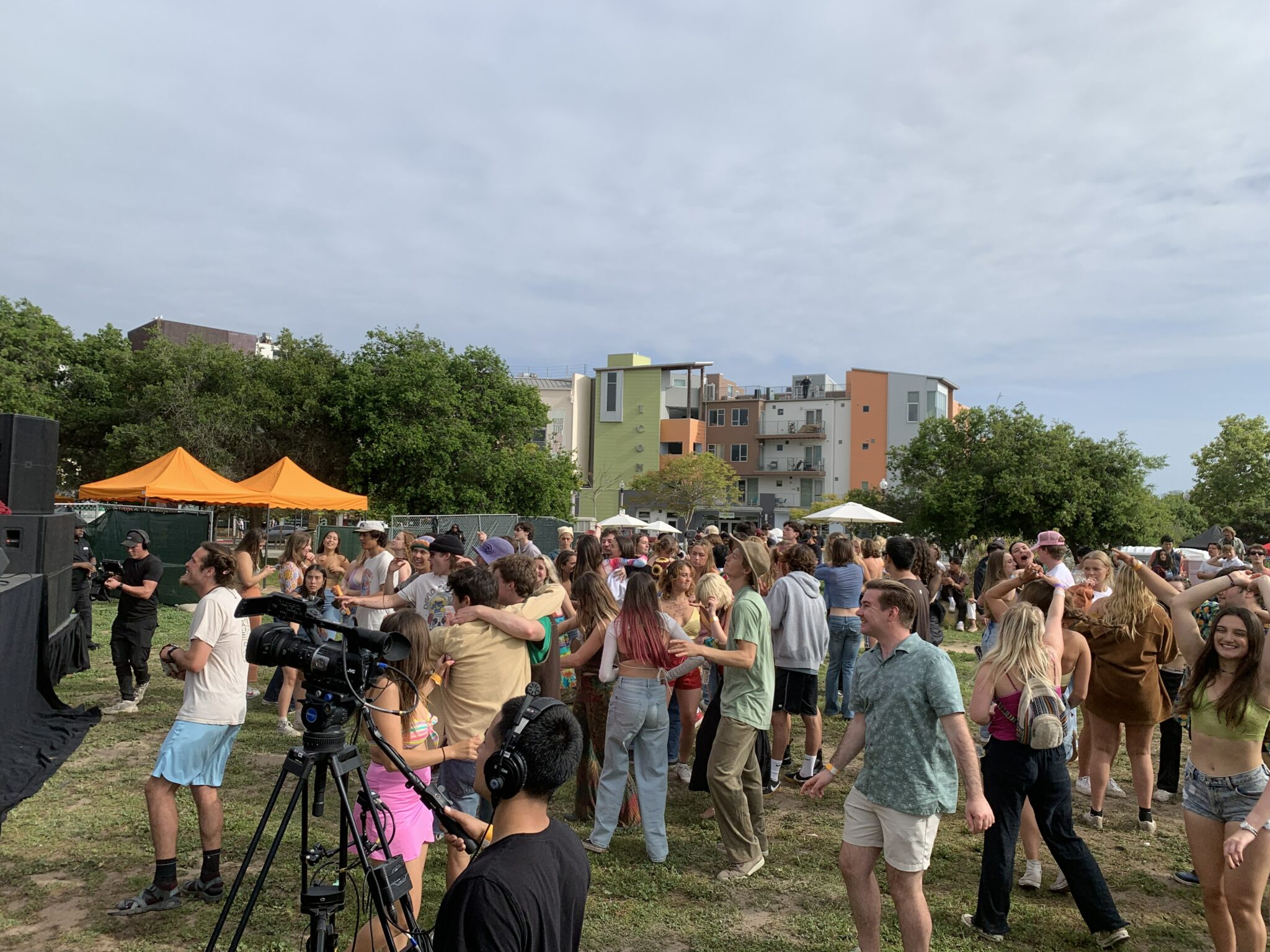 Over 1,000 students and residents attended the event. Courtesy of Ethan Betrand

Over 1,000 students and residents attended the event, according to Isla Vista Community Services District (IVCSD) Board President and Director Spencer Brandt.

The festival was years in the making, with the pandemic preventing the community services district from holding the festival since 2020.

IVCSD, alongside several other community partners such as the Associated Students Program Board, created alternative events for students to engage in during Deltopia with the hopes of drawing students away from the heavy crowding and providing a safe environment during the annual, unsanctioned street party.

According to Brandt, the event was a success.

“I think it was really successful,” Brandt said. “We had a really stellar lineup of Isla Vista artists that did an incredible job … It was just so incredible to see the excitement that residents had, people enjoying the festival dancing, singing along with music or just chilling out with their friends playing cornhole. I think it was very much in line with our vision for a safe and fun Deltopia.”

Flaherty expressed a similar sentiment, assessing the event as a success.

“I thought it was really energizing and inspiring, and I think it’s great,” Flaherty said. “I kept looking around and thinking, ‘There’s so much opportunity for the next years to come.’ And so that I think was incredible.’”

According to Brandt, IVCSD aims to more heavily publicize future Spring Festivals beginning next year. Flaherty added that she hopes to add new elements to the event, including art exhibits and pop-up stores.

Flaherty said that holding the first Spring Festival two years after the start of the COVID-19 pandemic offered an opportunity for IVCSD and community stakeholders to rewrite the negative norms surrounding Deltopia.

“There was a huge opportunity to begin to rewrite some norms that may have left with graduating classes. And so there was kind of a lack of institutional memory,” Flaherty said, referencing how the pandemic and remote learning halted full-scale Deltopias since 2020. “[We] really recognized that this was something that we could capitalize on and really start changing the tide, making [Deltopia] really healthy and community-minded.”

Looking back on the event, Brandt described the experience as incredible.

“It was incredible to be down there in the pit with everyone dancing, singing along to the music,” Brandt said. “I am definitely a big fan of all of our bands now. I was going through and following the ones on Instagram and trying to get out to some of their other shows sometimes, too. I mean, it was incredibly, incredibly fun.”

A version of this article appeared on p. 7 of the April 7 print edition of the Daily Nexus.

The contrast between this story and the story interviewing participants in Deltopia is stark. These are politicians desperately trying to smear lipstick on a pig. One is reminded of Donald Trump lying about attendance at his inauguration. Not a single attendee is interviewed. That’s because attendance was tiny and compete waste of resources. The actual party with thousands attending was on DP. A student was seriously injured. Observing the throngs on DP balconies from the beach it is a miracle more people were not hurt. The CSD is not empowered to pay for an $89,000 party; they are supposed to… Read more »

This is an interesting article in the sense that the numbers stated & what I saw don’t add up. What I saw at around 3:30 was 10, maybe 20 people near the stage then by 5:00 or so there might have been about 75 people at most, maybe 90, but that was a coming & going figure, mostly going.
There’s definitely an inaccuracy issue here where the story doesn’t match the real world data. I kind of find it a little boggling.

Nexus, were you there to document the event? The photo above was provided by an IVCSD director. And it is not an accurate representation of reality. There were not a thousand people in attendance. In fact, the entire crowd is captured in this photo. Ask anyone who was actually there.