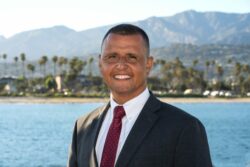 Camarena said that as sheriff, he hopes to evolve the office to be at the forefront of change — referencing the movement to defund or restructure the current policing system that gained traction following the murder of George Floyd. Camarena also cited his other main priorities if elected to be reducing crime and increasing accountability and transparency of law enforcement.

“The reason I’m running is to rebuild the trust between the community and law enforcement, to reduce crime, because crime right now county-wide is up,” Camarena said. “I’m running to make the sheriff’s office proactive, efficient and innovative. The sheriff’s office is stagnant and reactive. And the other reason is to improve our technology to keep ourselves accountable and be more transparent.”

Camarena came to the United States from Mexico when he was a young child, and his family moved to the city of Guadalupe, California.

“At a young age my parents brought me and we moved to the city of Guadalupe and then moved to the city of Santa Maria … These cities are considered [agricultural] communities. Growing up I had the opportunity to work in the fields with my parents. I picked squash, strawberries, broccoli, cauliflower every summer and on the weekends,” Camarena said.

After graduating high school, Camarena joined the Marines for four years of active duty, returning to the service after a few years.

Camarena also has a bachelor’s degree in public administration and a master’s degree in communication. He has been with SBSO for 23 years serving a variety of departments and places throughout the county. His roles have included Deputy Sheriff on patrol, Narcotics Detective in the Narcotics Bureau and later the Criminal Investigation Bureau, Sargeant and Patrol Supervisor at the Carpinteria Sheriff’s Station, Human Resources Sergeant, Lieutenant and Human Resources Lieutenant at the Santa Barbara County Human Resource Bureau and finally, station commander of the I.V. Foot Patrol. Camarena currently manages the Criminal Investigation Bureau and serves as a S.W.A.T. team manager.

Camarena told the Nexus that, if elected, he would be the first Hispanic sheriff at SBSO since 1867.

According to Camarena, the current technology available to SBSO is inefficient, and requests for information from SBSO take a long time to procure and disseminate.

“Anytime you request information or stats, it takes weeks or days to get information,” Camarena said. “Technology exists; that should never be an issue or problem that law enforcement has, and if we want to be more transparent, and if we want to maintain whatever trust we have with the community, we need to make sure that we provide information in a timely manner.”

Camarena said that currently, the sheriff’s office is “stagnant” and requires someone who will be “at the forefront of change.”

“The last four years that law enforcement has gone through — the protests, civil unrest, the demand for change, the negative publicity to law enforcement, coupled with the lack of interest in a law enforcement field,” Camarena said. “All that is perceived lack of trust between the community and law enforcement, [because] the sheriff’s office has been stagnant and reactive.”

“We have to be proactive. We need to be at the forefront of change,” Camarena continued. “We need to make sure that those who commit violent crimes are being held accountable, but at the same time, that those that are getting arrested for minor stuff that really need more help than just being incarcerated get the help they need.”

Camarena said that he hopes to accomplish these goals through a three-pronged approach: community, vision and accountability.

Regarding the community, Camarena hopes to involve community stakeholders when addressing issues within their spaces with an individualistic approach.

“I want to create a community engagement board, and what that means is this board is going to be composed of community leaders, business owners or community residents for the entire county,” Camarena said.

In terms of a vision, Camarena hopes to create and implement a crime reduction plan to combat the recent 10% increase in violent crime and 14% increase in property crime — which are crimes occurring on private property.

“I want to create a plan that we can focus on the actual group because it’s only a small percentage of individuals who’s causing the majority of this violent crime,” Camarena said. “[We should] be able to identify where are these individuals and how are we going to deploy our resources to make sure that we start taking control and start reducing the uptick in crime.”

For property crimes, Camarena hopes to use data and implement problem-oriented policing.

“One of the things we do sometimes is bringing new approaches [of policing], for example, problem-oriented policing, where we could have good data analysis and see when these types of minor crimes are occurring,” Camarena said.

Under the final aspect of the three-pronged plan, Camarena hopes to increase accountability within law enforcement. This will include updating law enforcement technology so that the public can have faster access to information from SBSO and law enforcement can analyze data from how they respond to various incidents within the county.

Camarena added that better technology could help curb expenditures from SBSO, which currently exceeds its allocation.

“The last several years, we have always been over our budget from $1.2 to $2 million over budget, and the majority is on overtime. Having good technology, you can analyze where are your resources being deployed,” Camarena said.

“There’s been a shortage of staff, so using a staffing model from before might not be the proper staffing model of today’s time,” Camarena continued. “Maybe it’s time to look at the data and figure out, ‘Maybe we don’t need four people here.’”

“We talk about incarceration, we talk about recidivism and why there is this revolving door. The same person gets arrested, stays one month in jail to do these programs and then three months later, he’s back in jail,” Camarena said. “Having good technology will give you the capability to analyze, ‘Are these programs working?’ And if they’re not working, let’s change them.”

Camarena said if he were to be elected, he would use his three-pronged plan to move forward and progress past current leadership.

“The department is stagnant. The current leadership is stagnant. [Brown] wants to stay the course. He doesn’t want to evolve with change … He doesn’t believe that we need to change,” Camarena said. “I’m about moving forward. I have the leadership abilities that are required of a leader to lead an organization.”

“If you want law enforcement to evolve, then go out and vote and vote for me, Juan Camarena, this June,” Camarena said.

A version of this article appeared on p. 6 of the April 7 print edition of the Daily Nexus.

Juan is a veteran and a real sheriff who has done it all. He’s not a politician.

We want this man who has so much education, hands-on and leadership experience—who is really dynamic and ready to address real change in the Santa Barbara County Sheriff’s Office. This is so desperately needed to accomplish BETTER LEVELS OF SAFETY in all our local communities. Juan Camarena is just what our County needs!