The Daily Nexus
Opinion
Turn Down Your Speakers, It’s Time to Start Listening for the Snowy Plovers
March 31, 2022 at 4:50 pm by Lola Watts 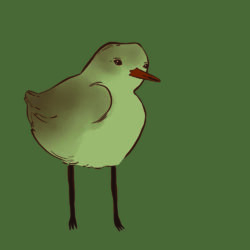 Isla Vista locals, have you ever heard of the snowy plover?

If the answer is no, rest assured that you are not alone in the matter. It was not until a strange warm spell in February that I stumbled across this species of bird, whose home just happens to be at the Coal Oil Point Reserve at Sands Beach, right below our beaks (no pun intended).

I wish that I could say it was intentional, but I truly had no idea where I was going that day.

Despite nearing the end of my second year living in the Isla Vista area, my knowledge of the town is limited. To my shame, I spend much of my weekend leisure time indulging in the infamous UCSB party scene rather than spending any substantial time exploring the nooks and crannies of the Santa Barbara area. Sure, in my mental map I have a handful of frequented restaurants that I spend a little too much money at, the charming yet slightly overpriced food at the Isla Vista Co-op, and of course, the bustling parties on Del Playa Drive. Aside from these staples, however, I have left the Isla Vista and Goleta area widely uncharted.

That February afternoon, I had been following a local trail and just happened to stumble upon Sands Beach, where I noticed tiny streaks of white fluff darting around piles of seaweed on the sand.

To paint the picture, snowy plovers are fast, white, about 6 inches tall and are able to fit into the palm of your hand. I found myself losing all sensibility that day, as I instantly wanted to scoop the wild creatures up in my hands — truly, that is how adorable they are. Walking back home from the beach, I embarrassedly took note of a sign at the beach’s entrance telling visitors to please stay away from the snowy plovers, for they are a species of threatened bird due to rapid habitat loss.

Okay, I might be being a tad dramatic, but the fact that there was a near-endangered species of bird on a beach so close to my home was something that had left me thinking. After doing some research, I found that there was much more to the snowy plovers than I had imagined. Sands Beach has made history as the largest winter aggregation of snowy plovers in all of America, and the work gone into saving these creatures has been extensive, including weekly to daily check-ins on the newly hatched chicks. It felt as if an entire world, that was once obscured, had shown itself to me.

Call it fate, but the moment I interlocked my gaze with the snowy plover straight ahead of me, I vowed to put away my party shoes and spend more time exploring the things that matter.

As raucous music came bumping through my walls that night, I realized that the answer to these questions is the same as the answer to the question of how anybody can listen to the same 2010’s throwback songs every weekend without tire.

Once ranked as the No. 2 party school in the U.S., the dominating characterization of UCSB as a “party school” clearly holds great agency. When Saturday night blooms, one of the first thoughts to enter my mind revolves around what parties are going on that night. When Saturday night slowly rolls into the dawn of Sunday morning, the next thought to enter my mind is, “Can the neighbors keep it down?”

Put simply, the untz untz untz of blasting EDM is drowning out the sweet chirps of our beloved snowy plovers, so much so that I had no idea that they existed, let alone needed the awareness of UCSB students such as myself.

Now, I am not calling myself UCSB’s leading snowy plover activist, but after seeing them darting around Sands Beach, they certainly hold a special place in my heart. Perhaps it was the fact that I was having my low-grade Jane-Goodall-wildlife-exploration moment, but the fact that I had stumbled upon this blooming community of snowy plovers felt … like a sign. Call it fate, but the moment I interlocked my gaze with the snowy plover straight ahead of me, I vowed to put away my party shoes and spend more time exploring the things that matter.

Rather than go out this weekend, stroll down the trail behind your house or drive around aimlessly, and see what you fall upon. My meeting with the snowy plovers opened my eyes to a recovering ecological world hidden behind nasty hangovers and a crowded Del Playa Drive. It looks like the snowy plover making a comeback right on our home beaches. And it looks beautiful.

Lola Watts wants readers to leave the party that they may or may not be at right now to appreciate the snowy plover, but from a distance. (They are a threatened species in recovery, after all!)