On Thursday, March 10, a crowd gathered in Santa Barbara’s Arlington Theatre to see Javier Bardem in person and Nicole Kidman via Zoom honored with the Maltin Modern Master Award. 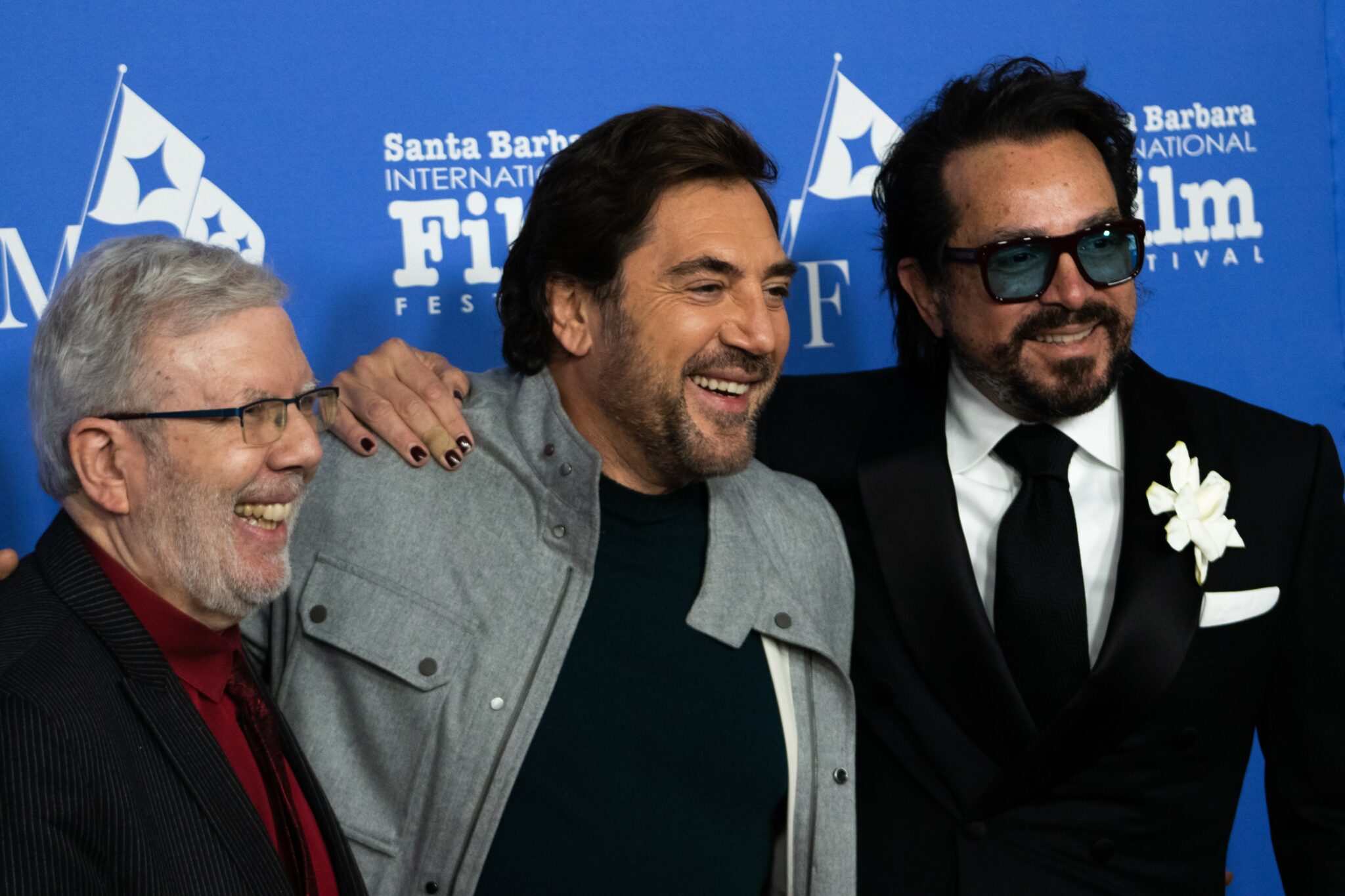 The film critic Leonard Maltin, Javier Bardem, and the executive director of the festival Roger Durling before the event. (Ewa Zakrzewska / Daily Nexus)

Leonard Maltin explained that Kidman wouldn’t be able to join because of a torn hamstring due to a recent movie shoot. “It’s incredibly frustrating, but I’m doing what I can,” Kidman said.

Viewers were treated to a montage of the actors’ most iconic roles — Kidman’s including “The Hours,” and “Eyes Wide Shut” and “Moulin Rouge!”; Bardem’s featuring “No Country for Old Men,” “The Sea Inside” and “Skyfall.”

Maltin then led Kidman into conversation first, beginning with asking how she felt on her trip to Los Angeles to film her first movie, “Days of Thunder.” Kidman revealed that being born in Hawaii and having an Australian heritage made her feel connected between the two, but knew she wanted to travel to California for auditions. “In a way, it felt like my destiny,” she said. 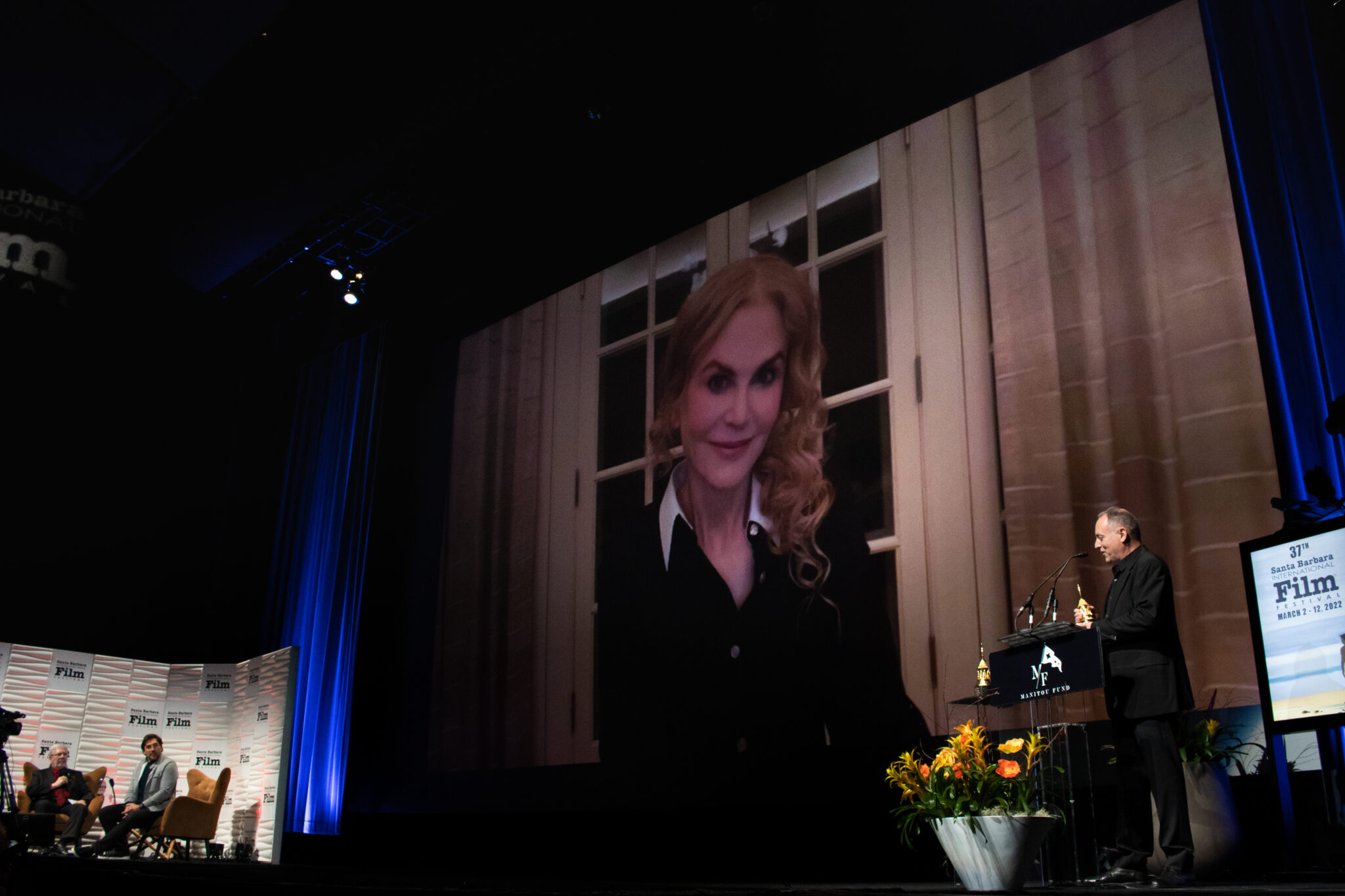 After multiple auditions, she headed off to Daytona Beach, Florida to film. Staying true, artistically, was crucial to her journey. Though it took a bit, she wanted to portray incredible women in complex situations, saying, “Though [it was] a complicated journey, I found my way.”

She also revealed that her financial situation was iffy. Deborra-Lee Furness, actress and wife of Hugh Jackman, let her crash on her couch, and Kidman was able to fly back and forth from LA to Australia, helped by her double citizenship. She was helped by her motivation and passion for acting — her goal was “finding the voices that need the support and traveling all over the world to do it.”

The two then talked about the film being awarded that night —“Being the Ricardos.” The Amazon Studios original series details the lives of Hollywood couple Lucille Ball and Desi Arnaz as they navigate personal problems alongside their hit TV show, “I Love Lucy.”

Kidman, who plays Lucille Ball, said that she worked incessantly on the film, noting Ball’s “fragility, resilience, tenacity and ability to survive.” She admits she didn’t know much about her life; “I didn’t realize what I was taking on,” she said.

“I wanted to honor her, but also put her in all her flaws. We’re all flawed as human beings and it’s great to ultimately shine the light, but there’s a complex person there. And that’s okay,” Kidman said of her work in the film.

Maltin and the audience thanked Kidman for being there and wished her a quick recovery from her injury. “Well it’s not quick, and I’m not patient,” she said, but remained for Bardem’s talk.

Javier Bardem, Kidman’s co-star who plays Desi Arnaz, was welcomed on stage and said hello to Kidman. He detailed how the pair worked well together — their initial Zoom meeting was on a Thursday, and they started shooting Monday. He said Kidman came with a lot of homework done, but he wasn’t without similar work ethic and strength. “When you look across and see this kind of talent across from you, he is the greatest, greatest actor. Anyone who gets the chance to work with him: just run,” Kidman said.

“I think we should stop the talk here,” Bardem said in response. “I don’t think it can get better than this.”

Bardem did corroborate their ease of working together, though. “Thank God the magic happened, because sometimes you try and it doesn’t.” 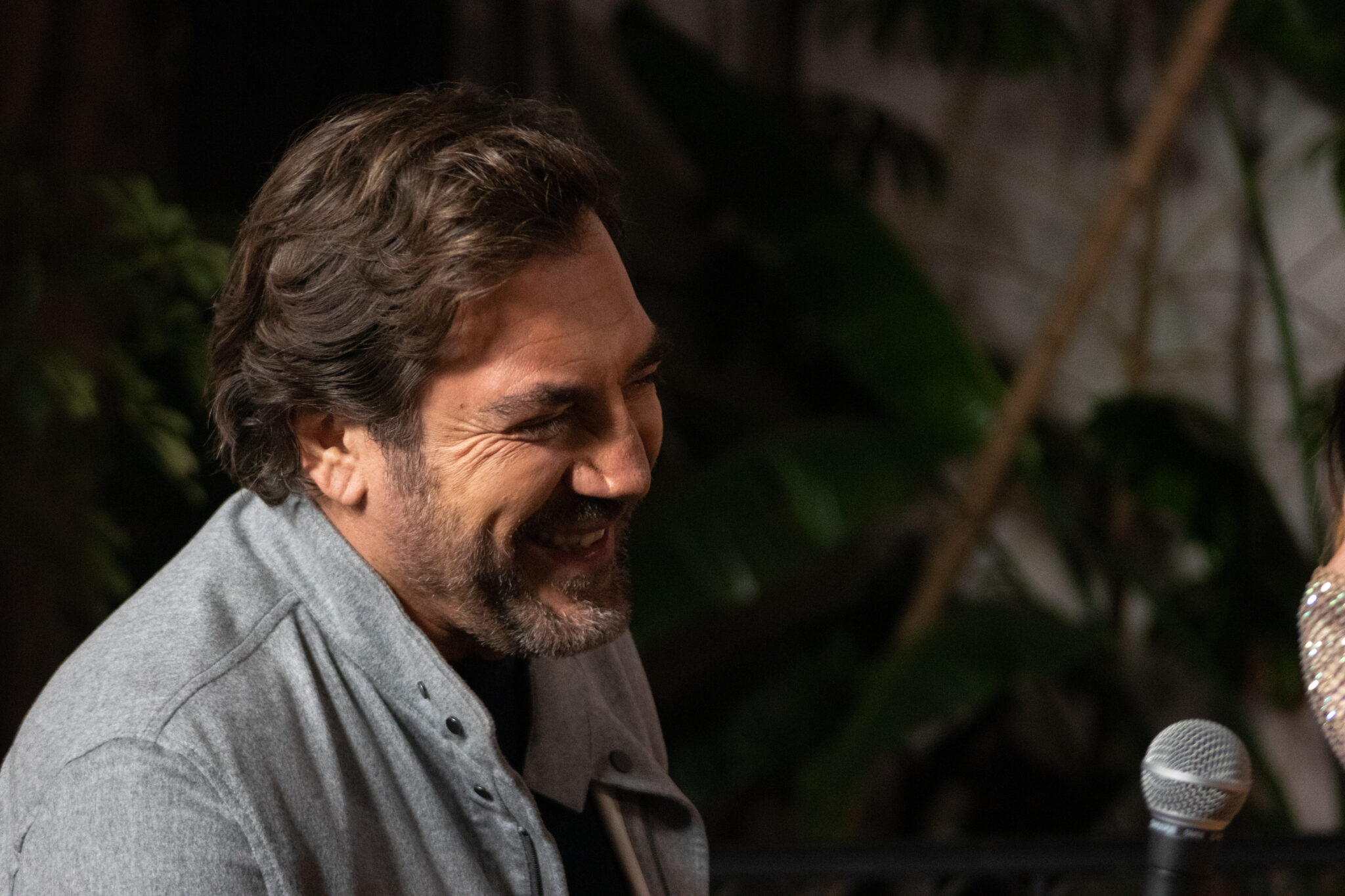 Maltin walked through Bardem’s previous careers as a rugby player — which he committed 14 years to and was on the national team — and painting. Though, his path was always evident in his genes. His whole family was involved in the theater; his grandparents and mother were actors, and cousins were producers and script supervisors. He eventually started out as an extra, then worked up to one line in films, then two, then four.

Maltin commented that Bardem was especially committed, but Bardem said, “I don’t know an actor who isn’t committed. Usually people work very hard to be there and earn the role because they know how many people are behind them in line waiting to be there. You have to earn your place and the only way you can earn it is a lot of respect and work.”

Similarly to Kidman, he expressed anxiety with signing onto “Being the Ricardos.” “[Desi] is a different monster because if you’re making a movie about a certain person, it’s because they made a big impact,” he said. “[I was] so scared to harm them with my performance or hurt their feelings with what I chose to do.”

Bardem walked through some of his iconic roles, like playing Chigurh in “No Country for Old Men” and Uxbal in “Biutiful.” Starting with the former, when Bardem read the liminal, strange script, he thought, “What the hell? Then I read the book, and it was worse.” He said that his broken English helped — the directors wanted him specifically to give the character a more sinister feel, the effect achieved by a scene that played with Chigurh and a gas station clerk in a silent but possibly deadly face-off.

“[That scene was a] great example of how little we are as actors if not the colleagues. [Gene Jones] is so brilliant in playing fear and insecurity that it makes my performance better,” Bardem said.

Todd Black presented both accomplished actors with the Maltin award. Of Kidman, he said, she’s “one of the most humble people I’ve ever met, and kind, and specific with what you wanted to do with that role.” She was “walking on that set and being kind and personal to every crew member and delivering 100% every day.” She thanked everyone in the theater for showing up as well and lamented her absence. “I hope to be there when I’m 104,” she signed off.

When Bardem received the award, he told Black, “We’ve been discussing this [project] for years, and if there’s anyone who should give it to me, it’s you.”

To conclude the night, Bardem said, “I may be one of the sexiest men alive, but not tonight … I’m very honored, I don’t want to leave this theater. Such a beautiful theater and view,” and thanked everyone for the gracious reception the crowd gave him and his wife, Penélope Cruz. 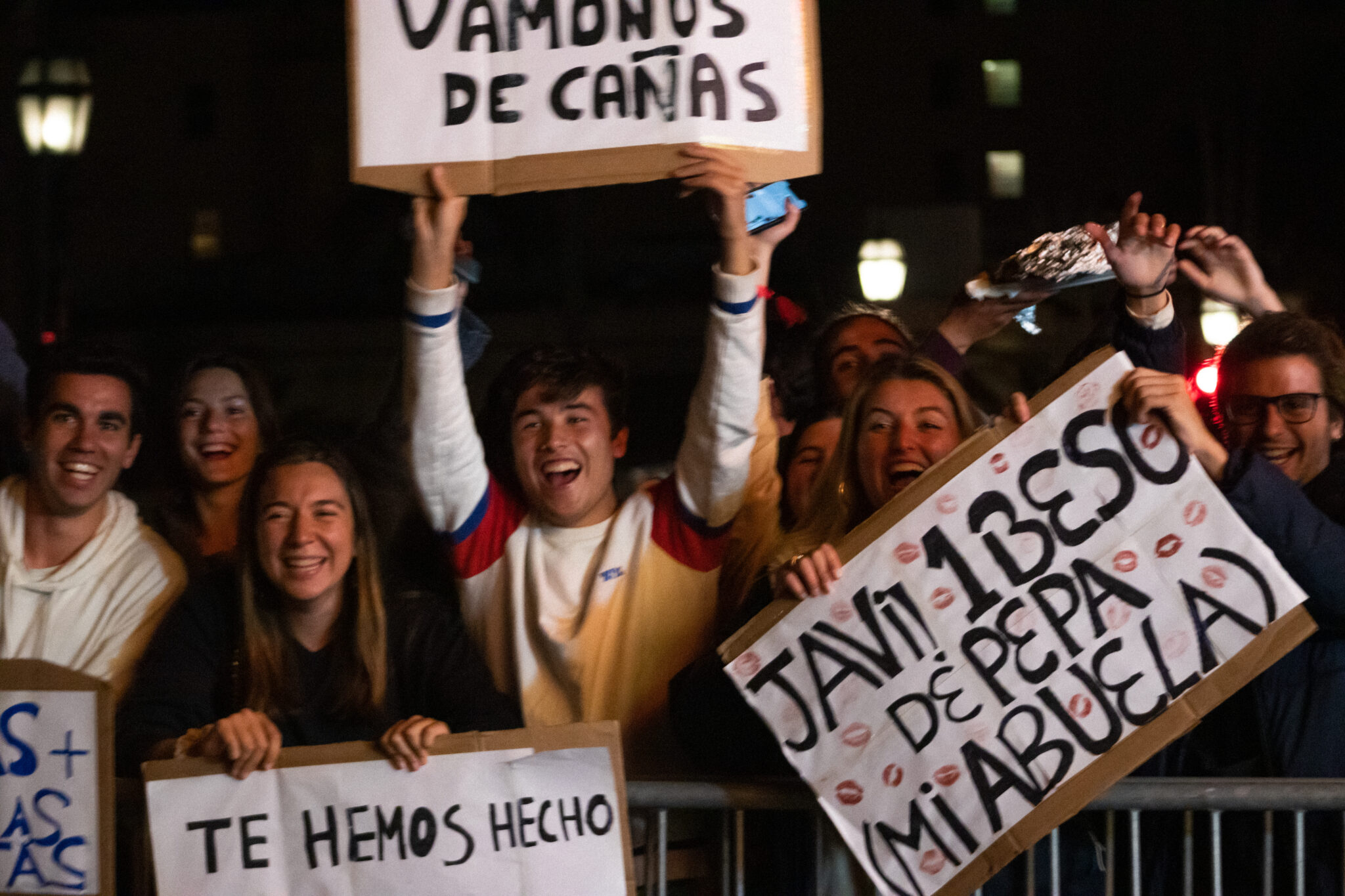 A group of enthusiastically vocal fans greeted Bardem on the red carpet with signs in Spanish saying “We have made you tortillas” and “Javi! Kisses from Pepa (my grandma).” (Ewa Zakrzewska / Daily Nexus)