UC Santa Barbara announced on March 2 that the indoor mask mandate — a policy that has been in place for about two years — would likely be lifted at the end of Winter Quarter 2022. The announcement came toward the end of a three-hour-long COVID-19 town hall put on by a coalition of campus groups and led by the Associated Students Student Commission on Racial Equity. 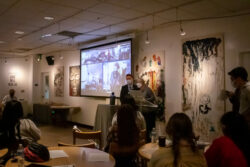 “The university is planning on lifting the mask mandate at the end of the winter quarter, specifically after finals,” Associated Students (A.S.) Student Advocate General Geovany Lucero said.

They stated that the university is “still monitoring variants, and think that if cases start picking up, they’ll put masks back in place, but are enthusiastic about staying in person moving forward, and very much so about lifting masks on campus for spring.”

“Winter quarter cases were pretty high but have essentially been cut in half the past few weeks and we’re at about a 1% positivity rate,” they continued.

Dr. Mary Ferris, director of Student Health at UCSB, stated later in the town hall that the mandate would likely be lifted soon, but that the university is prepared to adapt its mitigation protocols to respond to future case surges or new variants if needed.

“We’re very likely relaxing our mask requirements after the end of this quarter,” Ferris said. “But, we want to keep all these mitigation protocols in place so that we can bring them back if we have to. If there was a temporary surge, or if Santa Barbara County was hit with a new variant all of a sudden, we might have to ask everyone to put their masks back on.”

Representatives from the university were invited to the event to address student concerns about the university’s response to COVID-19. Ferris announced the university’s decision in her opening remarks to town hall attendees, speaking alongside Student Health Executive Director and campus physician Dr. Vejas Skripkus.

“We’re part of a medical team,” Ferris said. “It’s not just us making the decisions, but definitely we’re going to use the next few months to prepare for whatever’s going to happen. We monitor very closely many metrics to see what’s happening, and a lot of that includes the campus testing.”

Regardless of the university’s decision, unvaccinated individuals would still be required to wear a mask in most indoor public spaces under current Santa Barbara County law.

The requirement for all UCSB students and staff to wear masks indoors through the end of winter quarter remains in place.