The UC Santa Barbara Resource Center for Sexual and Gender Diversity and student organization SexInfo hosted a virtual Kink 101 workshop on Feb. 25 to discuss and educate attendees about safe sex practices within the kink community. 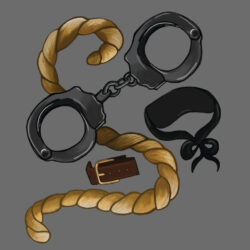 The workshop was led by fourth-year sociology major Owen Renert, founder of the Isla Vista branch of The Next Generation — a group that organizes safe, kink-oriented socials and educational workshops for the kink community within Santa Barbara and Goleta.

Renert began the workshop by defining some key terms used within the community.

“There are a lot of people in the community who don’t have sex and that’s just not part of their experience, and that’s completely valid. Whereas others, it’s solely a sexual interaction. It’s entirely dependent on your preference and your boundaries,” Renert continued.

“These are all power-based roles of people who essentially embody a particular type of behavior with whatever they’re introducing or aren’t things that they feel comfortable with,” Renert said.

Renert explained that physical and power roles are separate from each other and are based on individual preference.

“You could have a dom who’s a bottom, or you can have a sub who’s a top. It’s just entirely based on your individual preference and who you are as a person,” Renert said.

They also emphasized that these roles and activities are based on comfortability, consent and understanding your partner’s needs.

Renert then introduced the terms “safe, sane and consensual (SSC)” and “risk-aware consensual kink (R.A.C.K.)” for attendees interested in getting involved with the kink community. When looking for establishments to practice or learn about kink communities, known as “dungeons,” or a casual social gathering to meet others in the community, known as a “munch,” an individual should pay attention to these acronyms to ensure they are entering a safe space with defined guidelines.

“SSC and R.A.C.K. are essentially just these broad terms saying consent is important,” Renert said. “It’s essentially saying everything needs to be consensual. Different organizations will have different guidelines for what they define consent as, depending on where you’re going, but consent is consent. ‘Maybe’ isn’t a ‘yes.’ Only a definitive ‘yes’ is a ‘yes.’”

“If you don’t see the acronyms SSC or R.A.C.K. anywhere when you see an event or you see an organization, don’t go to that event,” they continued. “You want to see those two acronyms 100% before you go anywhere … or at least if they don’t have those two acronyms, they have a very extensive list on safety protocols and how consent is defined.”

Safety is a top priority within the kink community, and it goes beyond basic consent, Renert said. Ensuring the safety of all parties and defining specific boundaries with your partner during any kink-based interaction is known as “consent negotiation.”

Consent negotiation can begin with creating a list of activities and discussing your comfortability with each activity with your partner, typically on a scale of 1-5, called a “limits list.” Limit lists are not limited to kink-based activities and can also include basic likes and dislikes.

“Limit lists are used for everything, and I’m not just talking about kink activities,” Renert said. “I think on my limit list I have, ‘Don’t take me for a hike. I will never do that.’ It’s like when you do your roommate questionnaire. It’s basically that but on a very intimate level.”

In addition to a limits list, some parties may also participate in a “diagnostics scene,” according to Renert. For individuals who are interested in kink-based activities that involve inflicting physical harm in any capacity, this consensual interaction physically tests and experiments one’s limits. Safe words like “yellow” and “red” are used during these scenes to describe how close one is to reaching their physical pain threshold.

Renert emphasized that limit lists and levels of comfortability can change at any time.

“You can update your limit list any time you want. If something changes, say you didn’t like something before, but you met a partner that was very, very patient with you — you’re like, ‘Oh, I actually like that, under this context.’ Or, ‘Hey, I realize that I didn’t really enjoy this as much as I used to.’ Then you can move that off your list,” they said. “Proper negotiation practices will prevent you or your partner from accidentally overstepping their own or your boundaries.”

When attending social events or meeting anyone new within the kink-based community, Renert recommended always having a limit list on hand, even if it is a general mental list of self-set absolute boundaries. Renert said to never open yourself up to “whatever” when it comes to kink-based activities.

“[A new member of the community] will say, ‘OK, I’ll go with whatever.’ Don’t do that,” Renert said. “You’re opening up the space for somebody to do whatever, and that’s never a good situation to be in. Always have a limit list on hand.”

When meeting people within the community through an online platform like FetLife, which Renert described as a “kinky Facebook,” Renert spoke about the necessary caution that comes with sharing private information with a stranger on the internet.

“[Keeping information private] is a very normal thing to see in the kink community because sometimes people get their work threatened, or they get their social life threatened if they see somebody that they rejected,” they said.

Renert said that you should also never meet someone new for the first time in a private setting. It is best to meet them at a safe, public place, like during a munch.

“Never agree to meet up or do a scene with somebody that you do not know,” Renert said. “Even if they sound like a really great person. Don’t do that. Don’t go to their house … On the first meeting, you go to an event, whether it’s a munch or a coffee shop, you go to a public place.”

Events can be found on FetLife and other kink-based platforms; before attending an event, Renert said it is important to look through the organization’s rules and support systems for attendees. Renert emphasized that building safe and reliable support systems is highly prioritized within the kink community.

Even when attending public events, they said it is important to be aware of the people you are interacting with and to be careful with the people you choose as partners.

“It doesn’t matter what gender you are. People in the kink community are hit or miss just like any dating app,” they said. “Be safe, please be safe. Vetting is the most important part of the community just because it’s such an intimate field. There are some people who think they’re entitled to sex or think that it’s purely something pornographic or something in that context. So going to these public events, where those creepy people don’t tend to show up to, it’s a great way to have a good support system.”

Young Voters/Students and Mental Health!!! By John Burl Smith author of “The 400th From Slavery to Hip Hop!” Back before “mad bomber” Joe Manchin and “tail gunner” Kyrsten Sinema, salvaged “Build Back Better,” a vitally needed social programs, and stabbed Pres. Biden in the back by stripping out and passing all corporate friendly projects, many Americans felt a different mentality would set policy in America. Hearing Manchin’s current rhetoric, if I didn’t know better, sounds as if he is making a grab for the “White House brass ring.” But his problem getting what he covets most is there will never… Read more »