On Thursday, Feb. 24, four local bands converged for a battle of the ages. Organized and hosted by the UC Santa Barbara’s Associated Students (A.S.) Program Board, this year’s “Battle of the Bands” was held at The Hub, a cozy and intimate venue inside the UCen. The bands — Art Official, Johann Vogus, Field Daze and Duende — vied for the coveted prize: bragging rights as the best band in Isla Vista as well as a spot to perform at the next I.V. Open Market. 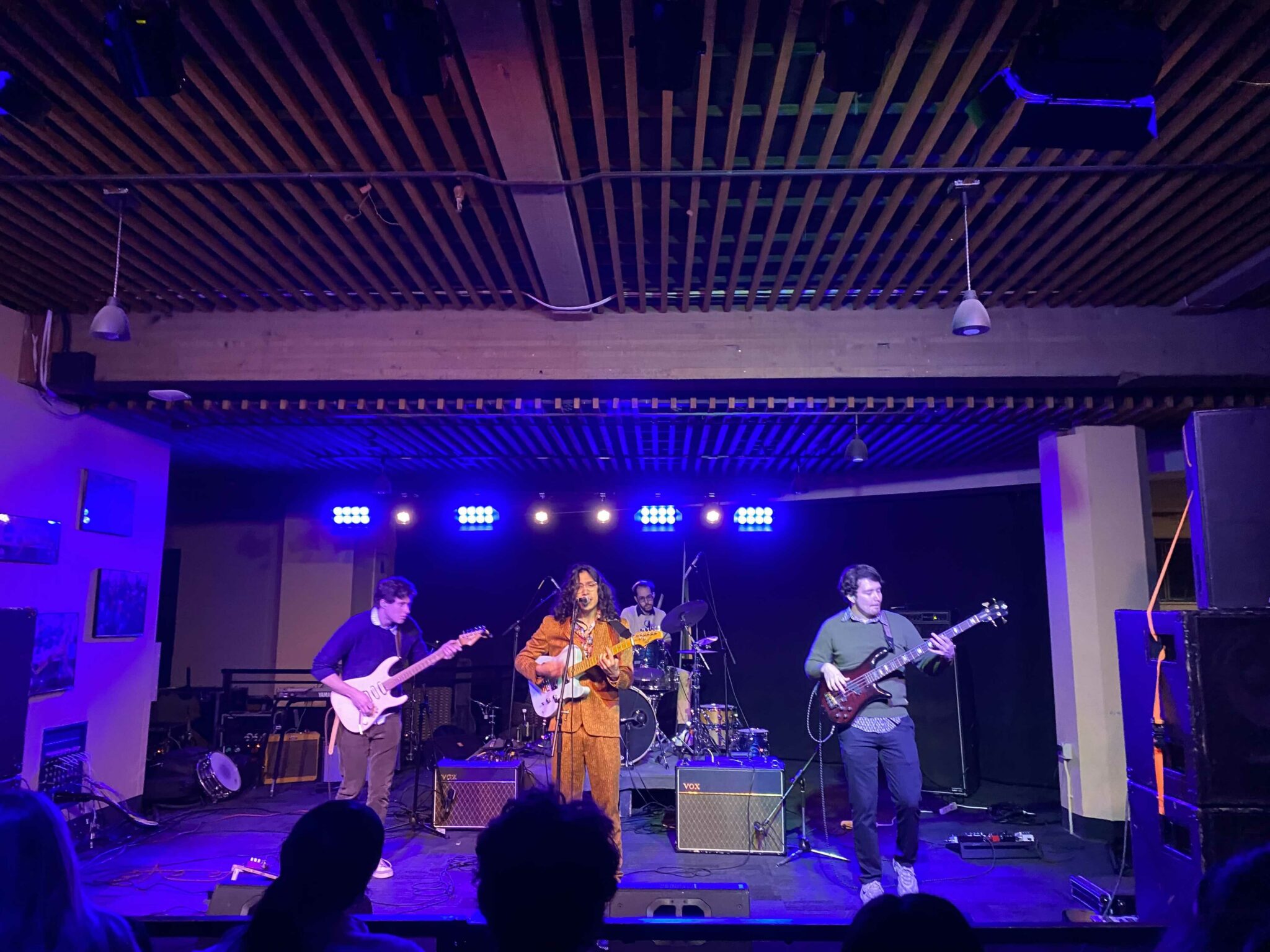 The night began with a few introductory remarks by A.S. Program Board Concerts Assistant Wally Corngold as he explained the rules of the competition. Each band had 25 minutes to play a selection of songs, and the set would be scored by three judges according to various metrics including musicianship, originality of the songs and the audience response. Corngold then introduced the panel of judges that included Raul Cano-Rogers, who runs a local music blog called Live Notes SB, Los Angeles-based artist and producer Eli Goss and Sunidhi Sridhar, the editor of the Artsweek section of the Daily Nexus.

The first band up was Art Official, whose good-humored presence quickly brought the audience out the darkened corners and towards the stage. Lead singer and guitarist Jacob Pabalan, dressed in a snazzy orange-y suit introduced the first song of the night, aptly entitled “Aran’s Song,” after bassist Aran Mazariegos. During the first two songs, the crowd was visibly enthralled by the sounds of Art Official, and you could see no shortage of dancing attendees. The crowd continued to fill in throughout Art Official’s set, and the band’s cover of The Beatles’ “Don’t Let Me Down” was very well-received as evidenced by the crowd joining in on singing the chorus. The band ended their run with a love song as Pabalan declared to the audience, “We love you all.”

Walking onto the stage, the lead singer and guitarist of Johann Vogus, Joey, walked directly to the microphone and humorously quipped, “What’s up, party people?” Before Johann Vogus began their set, Corngold relayed some introductory remarks and even made a joke about Pabalan’s stylish suit. Ever the funny man, Joey observed, “Did you know we’re like less than a mile from a Panda Express?” Johann Vogus played an upcoming single, “King of the World,” and before playing a new track, a groovy and relaxed composition, the lead singer noted, “This is what I want my music to sound like. Out of the box.”

The Beatles homages did not stop at Art Official, and as he introduced the fifth song of the set, Joey admitted the difficulty of naming songs. In reference to The Beatles’ “I’m Only Sleeping,” the band’s song was titled “I’m Only Pissing.” Before ending the set, Johann Vogus thanked the band, which featured Art Official’s Mazariegos on bass, noting, “They really learned a lot in a short amount of time.” After the set was finished, drummer Charlie Kernkamp ran up to the microphone and declared, “Putin sucks!” This comment, directed at the Russian president’s recent invasion of Ukraine, was met with scattered applause. 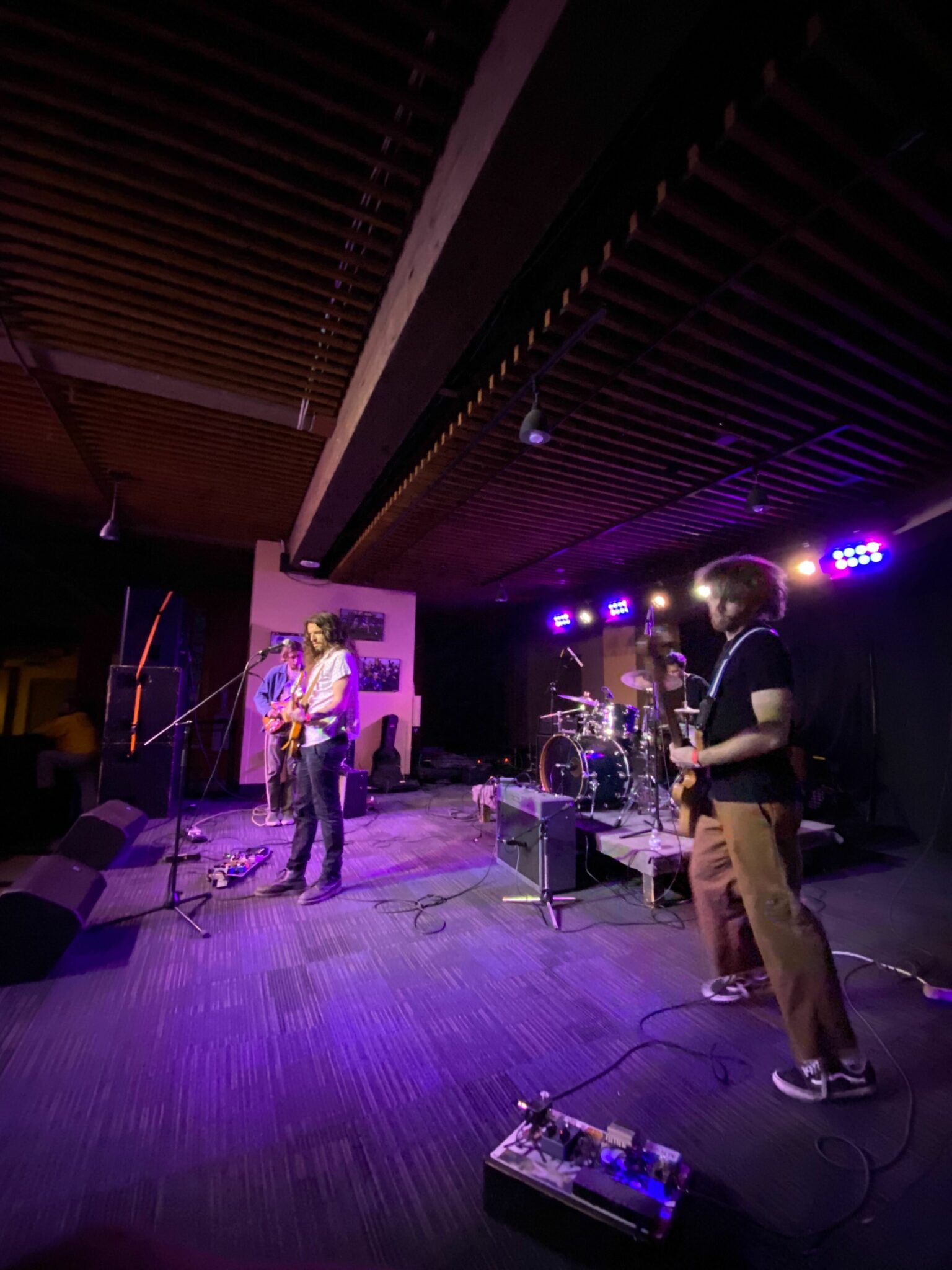 Up next was Field Daze, and before beginning their set, lead singer and guitarist Drako Alva noted that the band would be playing through a wide range of songs, and fly through their setlist they did. During the fifth song of their set, “Drunk Text,” several audience members could be seen engaging in lively, almost moshing-esque, movement. They were definitely enjoying themselves and the music. As the band was winding down their time on stage, they announced the release of their next extended play (EP), “Oceanside Side,” which is set to be released on Thursday, March 3, followed by a release show on Saturday, March 5.

The fourth and final band of the night was Duende. Lead singer Arman Sanchez-Mohit started the band’s set by asking the audience, “How are you guys doing tonight?” The group then launched into a cover of Rush’s “Xanadu” and as an avid fan of the Canadian progressive rock trio, I was both shocked and impressed that Duende began with such a daring first choice, but I digress; the song definitely got the audience going during the final stretch of the battle. For the second song of their set, the group played the first song they wrote, “Confessed,” which was followed by a song they wrote “for a guy who calls the cops on us for practicing.” The name of that song is “Fuck Bruce.” For their final song, the band invited collaborator Cassidy Fragakis to sing on a cover of Led Zeppelin’s “Dazed and Confused.” The song brought together each band member’s technical chops, but it was drummer Mathew Swanson whose prowess shined through during the cover.

There was a brief intermission after Duende’s set as the judges tallied their results, and you could feel the excitement and anticipation in the air as everyone in the room eagerly awaited the results. Corngold walked up to the microphone and, after commending all of the bands for their incredible talent and passion, crowned Duende the victor of this year’s Battle of the Bands. After all was said and done, the lively competition was an entertaining night filled with great music and even greater and talented musicians.