During the winter months in Albuquerque, New Mexico, the city’s multi-use convention center transforms into one of the best indoor track and field facilities in the nation. Featuring a red and blue striped 200-meter track, jump pits, throwing rings and bleachers, the cavernous room becomes a hub of athleticism. Renowned for its Mondo surface — a synthetic rubber that gives more return force than average tracks — the best athletes come ready to set a personal record. 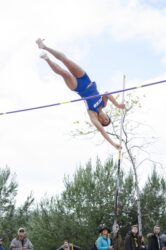 The annual Don Kirby Elite Invitational hosted by the University of New Mexico was no exception. Attendance included dozens of top-tier schools in the Pac-12, Big West and Mountain West conferences, including a selection of the UC Santa Barbara women’s track and field team. The Gauchos competed well, holding their own against national champions and clocking numerous personal bests.

The big event of the weekend was redshirt sophomore Morgan Simon’s performance in the pole vault. With a vault of 3.82 meters, or 12 feet 6.25 inches, Simon surpassed the previous UCSB school record of 3.71 meters. The mark earned her first place in her section and represents a collegiate best for Simon.

“I am just so grateful for all the support I have received from my coaches, especially Bill Whitaker, who continues to help me progress,” Simon said. “I am also thankful to have such supportive team members, family and friends.”

“Progressing into the outdoor season, my goal is to continue to set new personal records and improve while staying physically and mentally focused. I am really looking forward to the upcoming season!”

As pole vault is one of the few track and field events that remains the same both indoors and outdoors, Simon’s mark foreshadows a successful spring season.

Other notable performances of the weekend came from redshirt sophomore Emma Barthel and redshirt freshman Jessica Swalve. Barthel ran a lifetime best in the 200-meter dash, clocking just 25.09 seconds. The time moved her to third overall on the UCSB indoor records list. Barthel also performed well in long jump, jumping 5.53 meters and earning second in her flight. Swalve set a personal record in the 60-meter hurdles with an impressive time of 9.18 seconds, which moved her to seventh on the UCSB all-time list.

When asked to reflect on the women’s indoor season, Head Coach Cody Fleming said, “It was a successful indoor season for our women. Indoor track is still relatively new here, as we’ve only had it since 2009, so to have two indoor records with Mariana [Lanz]’s 200m and Morgan [Simon]’s pole vault was great to see.”

“We made sprint finals, won heats, made it into field event finals, won jumping sections. I think we built some momentum heading into the outdoor season, and I’m looking forward to seeing that growth keep evolving within our team.”

The Gauchos look ahead to their first outdoor track and field meet on March 4 at Long Beach State.