The Daily Nexus
News
Maha Hilal Leads Discussion on How the War on Terror Shapes Islamophobia
February 26, 2022 at 12:00 pm by Yuriko Chavez

Correction: A previous version of the article incorrectly put the following in quotations: “Institutionalized Isamophobia comprises of racial profiling and hyper-surveillance of Muslim communities, whereas internalized Islamophobia is members of the Muslim community feeling compelled to participate in Islamophobic narratives.” This has since been corrected.

The UC Santa Barbara MultiCultural Center hosted scholar, activist and Co-Director of the Justice for Muslims Collective Maha Hilal on Feb 8. for a virtual discussion on the ways that the war on terror increased Islamophobia and impacted domestic and international Muslim communities in the past two decades. 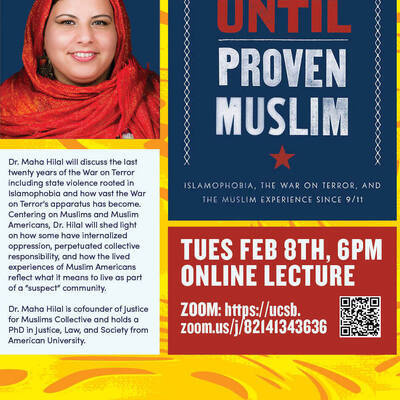 Hilal referenced her book, “Innocent Until Proven Muslim: Islamophobia, the War on Terror, and the Muslim Experience since 9/11,” in which she analyzes institutionalized and internalized Islamophobia.

Institutionalized Isamophobia comprises of racial profiling and hyper-surveillance of Muslim communities, whereas internalized Islamophobia is members of the Muslim community feeling compelled to participate in Islamophobic narratives, according to Hilal.

Institutionalized Islamophobia is “a phenomenon whereby hate and fear of Muslims are officially built into state and societal structures in order to pursue power and justify war and repression,” Hilal’s presentation read.

Another aspect of Islamophobia that Hilal researches in her book is the notion of internalized Islamophobia in which Muslims will “absor[b] dominant narratives and tropes that they — the religion and its followers — are inherently violent and terroristic,” according to the presentation.

“Internalized oppression, generally, is so important to study when it comes to state violence is because of the fact that individuals within the group that are being targeted embrace negative and problematic tropes about their own group and most problematically can become agents of the state,” Hilal said.

She began by presenting a video that showed a timeline of events that occurred due to the war on terror — from the Guantanamo Bay prison detainments in 2002 to President Joe Biden launching a drone strike in Syria in 2021.

She discussed the way that Islamophobia has been constructed in large part by the U.S. government to propogate the idea that Islam is “violent, barbaric, uncivilized and opposed to normative democratic values,” the presentation read.

“Islamophobia positions Muslims as existing outside of the moral boundaries extended to other communities such that their dehumanization results in consequences ranging from prejudice and discrimination to detention and even death.”

Hilal’s focus on social constructions within the book is one of the ways that she aims to deconstruct the war on terror and the ways that it was used to justify militarism, draconian immigration policies and torture, she said.

“There is a way to stop the violence, and part of it is the United States taking responsibility  for this violence. I should note, however, … that US wars never actually end; they just morph into new wars that preserve the violence of wars past.”

Hilal referenced the United States’ use of constant drone strikes in Syria and President Donald Trump’s travel ban from predominantly Muslim countries that passed in 2017. She compared two quotes from President George Walker Bush and President Barack Obama to demonstrate how Islamophobic language is apparent in American politics across party lines. The former is Bush’s statement on Sept. 11, 2001.

Hilal then quoted a speech President Obama delivered about terrorism in September 2014.

“We can’t erase every trace of evil from the world, and small groups of killers have the capacity to do great harm. That was the case before 9/11, and that remains true today. And that’s why we must remain vigilant as threats emerge,” she read.

Hilal asked the audience to consider both quotes from the perspective of citizens in other countries, some of whom are “constantly facing drone strikes” because of U.S. retaliation.

“Of course the United States gets to define what evil is and what violence counts as actual violence. The United States has obviously only been concerned with the harm that has befallen on its citizens,” she said. “If you’re someone in another country whose families and communities are constantly facing drone strikes, what would those quotes mean to you?”

“What I really want to impart here is just how powerful narrative is in the course of the war on terror and how it has served to define the state’s interests in the way that those targeted by the state have been almost powerless to confront,” Hilal continued. “If you are the one who gets to construct what terrorism is, what evil is, what violence is, you have the power. “

Hilal concluded the event by emphasizing the need to uplift Muslim communities in the face of Islamophobia and the societal need to move away from politics informed by the war on terror.