In 2015, the Northern Chumash Tribal Council in Los Osos nominated a stretch of land between Cambria and Santa Barbara to be officially recognized as a marine sanctuary. The area would “bridge the gap” between the Channel Islands National Marine Sanctuary (NMS) and the Monterey Bay NMS. According to the Environmental Defense Fund, the Chumash Heritage National Marine Sanctuary (CHNMS), as it is to be called, will protect a crucial part of the California coastline which includes culturally important sites for the Chumash people, valuable oceanographic features and a rich ecosystem containing prime habitat for many species of marine life. While the CHNMS has been on the sanctuary nomination list since 2015, it was announced just this past fall, in November 2021, that the sanctuary would advance to the designation phase. 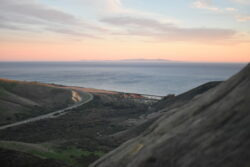 The sanctuary would “bridge the gap” between the Channel Islands National Marine Sanctuary (NMS) and the Monterey Bay NMS. Sean Crommelin / Daily Nexus

One of the people responsible for getting the NMS to this stage is Congressman Salud Carbajal, representing the 24th district of California, which includes Santa Barbara and San Luis Obispo counties. Carbajal has been involved in the designation process since taking office in 2017, continuing the work his predecessor Congresswoman Lois Capps had been doing.

Over the last five years, Carbajal has worked with other representatives such as Senator Dianne Feinstein, then-Senator Kamala Harris and Senator Alex Padilla on advancing the progress of the CHNMS. Last November, he joined Feinstein and Padilla, as well as the Department of Commerce and the National Oceanic and Atmospheric Administration (NOAA), to officially announce that the NMS would be moving into the designation phase.

The Nexus spoke to the NOAA’s Regional Policy Coordinator Paul Michel, who outlined the typical process of designating a new marine sanctuary and the next steps NOAA will take in getting the CHNMS designated. Michel said that the designation of new sanctuaries is a process that begins with asking the public for their thoughts on specific aspects of the nomination, such as proposed sanctuary name, boundaries and possible issues to address. This phase, known as the “scoping phase,” is the first step towards official designation.

It is projected to take about 9 to 10 months for the NOAA to review the comments and draft a management plan, proposed regulations and an environmental impact review. The first round of public commentary closed last month, but there will be a second round of public commentary in about a year. From start to finish, this process will take about two and a half years, which, while on track and going smoothly so far, Michel acknowledges is a somewhat ambitious timeline. Because the window for public commentary only just closed, Michel said it is too soon to draw any final conclusions, but he does say that, after having read about 400 responses, there does seem to be a lot of support.

One group which very much supports the designation is the Santa Ynez Band of Chumash Indians, located here in the Santa Barbara area. Tribal Chairman Kenneth Kahn said that “We are proud to support the designation of the Chumash Heritage National Marine Sanctuary. As stewards of the environment with strong cultural connections to natural resources, we look forward to working with the NOAA to help manage and protect the sacred sites throughout our beautiful coastline.” Regarding what would actually be protected, Michel said that this is actually still being determined, but that there are special natural resources, shipwrecks and cultural and Indigenous heritage resources within the planned boundaries of the NMS. He also said that this sanctuary is important because it will involve Indigenous communities in its management.

Carbajal said that some of the things that the sanctuary would protect are feeding grounds for numerous species of whales and dolphins, sea otter populations and kelp forests — which are all home to vital commercial and recreational fisheries — and that these resources are essential to California’s coastal economy.

“I am thrilled the Biden administration has taken this step to protect our coastal areas from further oil and gas drilling and strengthen our state’s $1.9 trillion coastal economy, which is propped up by tourism and commercial fishing,” Carbajal said about the November 2021 announcement.

“Bringing the proposed sanctuary into the designation phase is the result of years of public engagement and I am grateful that we are one step closer to permanently protecting our coastline for future generations to inherit and enjoy.”

He also expressed his gratitude for “the steadfast leadership of the late Fred Collins, Chairman of the Northern Chumash Tribal Council, whose legacy of advocacy was instrumental in moving this project forward.”

When asked about why the designation of this sanctuary is important for his constituents, Carbajal responded that “In addition to protecting our coastal economy, the designation would also help us in our fight against climate change and preserve our environment for generations to inherit. Designating the Chumash Heritage National Marine Sanctuary will advance President Biden’s America the Beautiful campaign to conserve and restore at least 30% of our nation’s lands and waters by 2030.” He also mentioned that the coastlines protected in this sanctuary would be protected from oil drilling, “where the ecological and economic devastation from oil spills is all too familiar.” 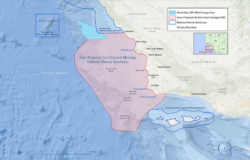 A map of the proposed sanctuary. Courtesy of the National Oceanic and Atmospheric Administration

Michel noted that the proposed area for the sanctuary has many challenging issues, including existing drilling platforms, platforms scheduled for removal, wind energy development and Diablo Canyon nuclear power plant decommissioning, just to name a few. However, by both protecting the marine ecosystem in this area and making sure that the proposed site does not overlap with the area designated for offshore wind development (Morro Bay 399 Area), the designation of this sanctuary is expected to further contribute to the Biden-Harris Administration’s promise to simultaneously advance marine conservation goals and those of clean energy.

This month, Carbajal, joined by Feinstein and Padilla, as well as several members of the U.S. House’s California delegation, sent a letter to the Department of Commerce and NOAA to reemphasize their support for the proposed NMS. “I will continue working with NOAA and stakeholders throughout this entire process,” said Carbajal.