The Daily Nexus
UCSB
UCSB S.T.E.M. Departments Focus on Diversity and Inclusion in its Programs and Courses
February 17, 2022 at 1:00 pm by Stella Jia and Alex Rudolph

UC Santa Barbara Black graduate student rates are at an all-time high of 3.5%, and the percentage of Black undergraduates majoring in S.T.E.M. fields has risen to 2.9% from 1.89% in 2012.

In the last seven years, the percentage of Black graduate students has risen 1.9 percentage points, from 1.4% in 2014 to 3.53% in 2022, according to UCSB’s Office of Budget & Planning campus profiles.

The percentage of degrees awarded to Black undergraduates in S.T.E.M. departments reached a high of 3.31% in 2016 and has increased by 0.31 percentage points since 2017. 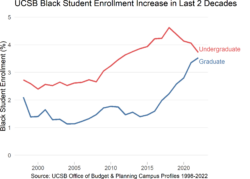 Despite having a below-average percentage of Black students, the computer science department has employed various programs to increase diversity within their department.

“We partnered with the National Science Foundation to develop a departmental plan for broadening participation in computing,” Bultan said. “We won multiple grants that have the specific intention of creating a more diverse and inclusive program for our students including an award from the Center for Inclusive Computing and the creation of our Early Research Scholars Program.” 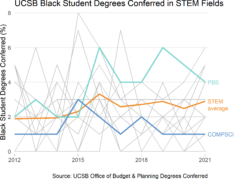 According to psychology professor and Department Chair Shelly Gable, the department created a new committee focused on improving diversity within the department in 2020.

“We formed a diversity, equity and inclusion committee a few years ago in our department, which is made up of faculty, graduate students and staff as well as undergraduate liaison from some of our undergraduate club programs,” she said.

The committee is currently working on a Strategic Action Plan to address all aspects of the community, from the undergraduate students to faculty members. As part of that plan, they’ve asked faculty to review their syllabi and make sure course content includes contributions by women and underrepresented groups that highlights research which includes diverse samples in terms of race, ethnicity and gender.