The Daily Nexus
Sports
Men’s Basketball Has Love-Hate Relationship With Winning
February 15, 2022 at 10:49 am by Preston Espar

The UC Santa Barbara men’s basketball team has continued their inconsistent play this season as they split the first two games they played in February. After falling to the UC Irvine Anteaters and Hawai’i Rainbow Warriors, beginning a two-game losing streak, the Gauchos were able to get back into the win column in a blowout against the UC San Diego Tritons. UCSB now holds a conference record of 2-5 and sits in 8th place in the Big West standings. 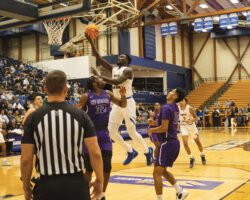 The Gauchos had another heartbreaking conference loss against UCI. The Gauchos lost by less than 10 points — a trend seen in all UCSB conference losses this season. In their 53-52 defeat, UCSB started out slow. In the first half, the Anteaters shot 50% from the field, hitting most of their open shots. UCI led by as many as 15 points, however, senior forward Miles Norris’ dunk ignited the Gauchos’ offense, as they were able to cut the lead to 12 at the half.

UCSB led a comeback in the second half, but it was ultimately not enough. This comeback can be attributed to the Gauchos’ defensive and offensive intensity. The Anteaters were only able to shoot at a clip of 33.3% in the second half, while UCSB was able to consistently draw fouls to stop the clock and shoot free throws. A late three by freshman guard Cole Anderson and a 5-second violation by UCI gave the Gauchos a chance to win as they were only down by 1 point. However, on the final possession, Anderson missed the potential game-winner as the shot clock expired.

Senior forward Amadou Sow led the Gauchos in their valiant comeback with 17 points and 11 rebounds. This was Sow’s second straight game with a double-double.

UCSB carried their defensive and offensive prowess over in their drubbing of UCSD. After scoring a career-high 31 points against CSUN three games prior, Norris set a new career-high with 32 points in the 84-48 victory.

Both teams began the game shooting well, however, the Tritons could not get consistent stops on defense throughout the entire first half. The Gauchos went on an 18-2 run, and from that point on, the game was never competitive. Norris scored 21 of his points in the opening half, as the Gauchos shot an efficient 74.1% from the field compared to UCSD’s 39%. At the half, UCSB led by 22 points.

The Gauchos did not let up when the second half began and immediately increased their lead to 30 points. The Tritons’ offense continued struggling to score and their defense gave the Gauchos everything they wanted. Both halves of basketball were dominant displays of the Gauchos as they found themselves with the lead for the rest of the game after the first 3 minutes.

UCSB will continue Big West play as they attempt to rise up the conference standings. In their next two games, the Gauchos will hit the road to take on CSU Bakersfield and Cal Poly.