The Daily Nexus
Science & Tech
Peering Into the Sea Otter Genome Reveals Much
February 14, 2022 at 8:57 am by Sean Crommelin

The 18th and 19th centuries were a time of remarkable and unprecedented exploitation across the world ocean. The explosion of practices like whaling and the fur trade led to a wide-ranging collapse of populations of species in a manner which, before and following, has found few parallels. 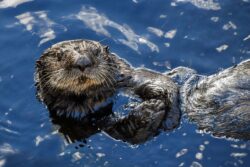 By the early 20th century, the world population of otters numbered in the low thousands — from a peak
of potentially 300,000. Courtesy of Pixabay

Among the most well-known and charismatic casualties was the sea otter, a mammal living in the northern and eastern bounds of the North Pacific which found itself ensnared by the Russian and North American fur trade.

Sea otters at that time were prized for their remarkable fur. Lacking blubber, like other marine mammals, sea otters make up for this by having the densest fur of any mammal, period. For every square inch on their body, they have about a million hairs — 1,000 times the density of human beings. In addition, under the microscope, this dense fur has a unique geometric, spiky texture which allows it to mat together and create an insulating layer of air close to the skin.

These traits make otter fur a fantastic heating system — and in the past, an attractive target for the burgeoning fur trade. By the early 20th century, the world population of otters numbered in the low thousands — from a peak of potentially 300,000. Protection efforts following this nadir allowed otters to partly rebound throughout their range — somewhat of a marine conservation success story. However, they still remain endangered to this day.

“Otter hunting at the height of the fur trade in the 18th and 19th centuries was persistent and intense, and otter populations were decimated throughout their range in the Pacific,” said Douglas Kennett, a professor of anthropology at UC Santa Barbara.

“However, our data indicate that remnant populations occurred in each region — maybe a few 100 individuals — and these animals were the source of the rebound after protection of otters in the early 1900s.”

A researcher and geneticist with the University of Washington, Annabel Beichman, working in collaboration with researchers from a number of other universities throughout the world, including Kennett, found an opportunity to learn about the genetic consequences of species-wide declines by examining this precipitous and nearly simultaneous drop in global sea otter populations.

Kennett, who has worked as an archeologist in the Santa Barbara Channel region since the 1990s, aided Beichman with his knowledge of Chumash hunting practices derived from oral narratives and other historical sources.

“My work on the Channel Islands has shown that otters were persistently hunted starting at least 5,000 years ago. I joined forces with geneticist Annabel Beichman, the lead author on the study, to study the long-term history of the species in the region using contemporary and ancient samples,” Kennett said.

“I want to highlight the importance of interdisciplinary and long-term historical research in addressing species extinctions. These efforts are vital for contemporary conservation efforts in the region. Also, I would like to highlight the importance of the archaeological record for establishing long-term baselines for assessing regional extirpation and extinction of species.”

Beichman, Kennett and their other collaborators worked to carry out genomic analyses of sea otter populations throughout history, detecting historical signals of extreme population decline in all of the populations that they sampled. They drew these samples from 107 sea otters drawn from five distinct populations — in addition to three historical samples from California, dating between about 1,500 to 200 years ago.

For example, archeological bones from San Miguel Island off the coast of Southern California were used to determine whether or not there was historical continuity between the modern populations of otters in the Southern California region and the Channel Islands of millennia ago.

They found that, indeed, California sea otters are part of a population that diverged from a larger ancestral population about 20,000 years ago, according to Kennett.

The broader story of otters that was enlightened by the researchers’ data told one of a robust population rebound; According to Kennett, the study’s data shows that remnant populations of otters persisted and, with protection, were able to once again roam their ancestral habitats in healthier numbers — in contrast to another hypothesis which posited that otters from the north Pacific migrated southward into places like Southern California following the fur trade.

The researchers found that further population decline could affect the fitness of recovering populations. However, a silver lining also peered through — the fact that low but healthy otter populations existed prior to even the fur trade suggests that the otters do not require high population counts to maintain sufficient genetic health.

Despite this, Kennett called for more research and data before drawing that conclusion with any larger degree of confidence.

“One of the more interesting results for me was that there was genetic stability between the ancient and modern otter samples in Southern California. These data also suggest that the successful rebound of populations since the early 1900s may be the result of long-standing stability of small populations historically,” Kennett said.

“However, we only analyzed a small number of samples and more work is needed to determine how stable otter populations were during the last 10,000 years in the context of Chumash hunting/management practices.”