The Associated Students Environmental Affairs Board held its first Block Clean Up to comb Del Playa Drive and its neighboring blocks for trash on Feb. 4. 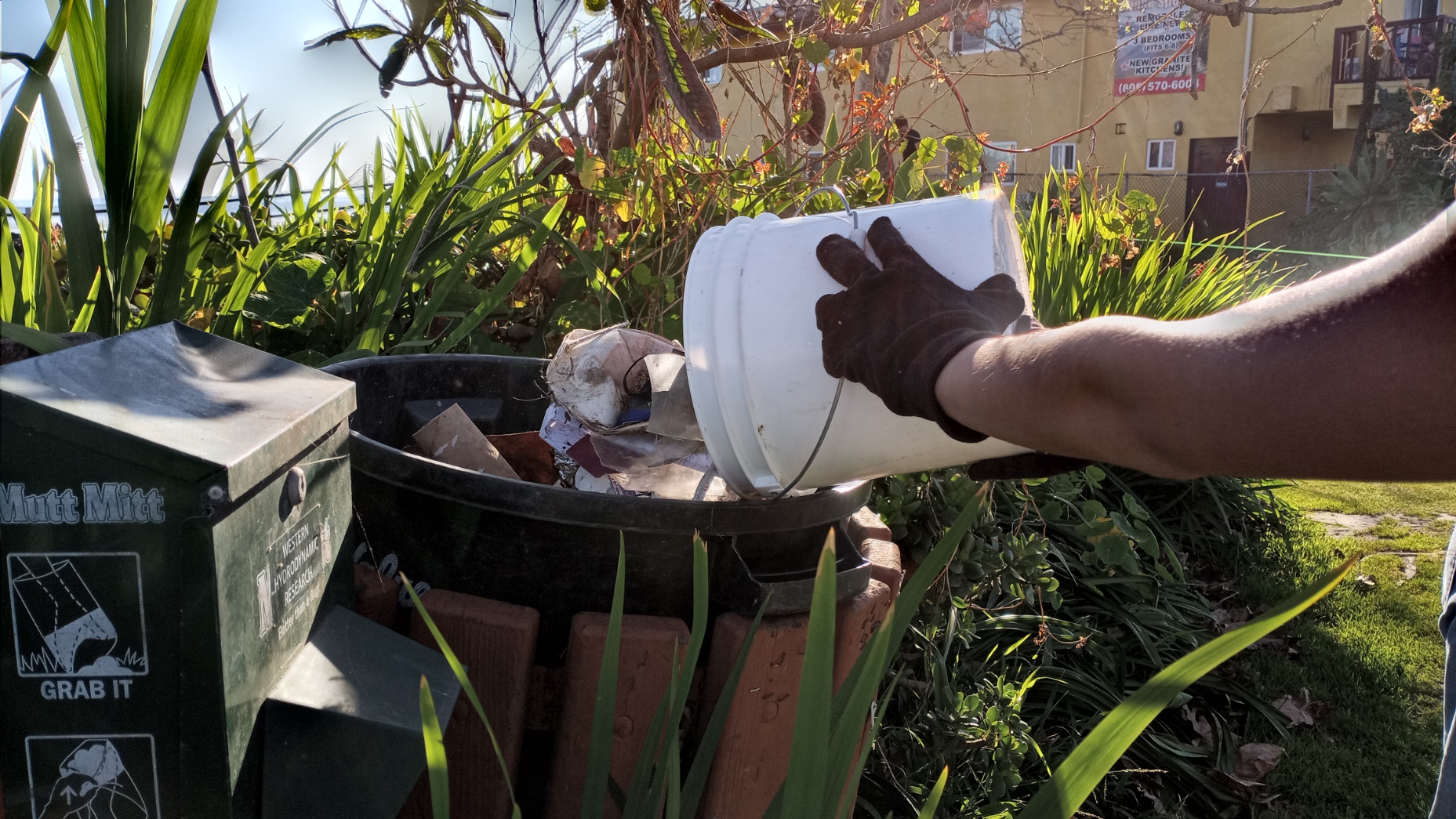 Approximately 20 gloved volunteers filled their buckets with 50.2 pounds of beer bottles, bottle caps, egg cartons and other pieces of garbage and relocated them to trash bins and dumpsters.

According to Landry Guillen, a fourth-year environmental studies major and the volunteer chair of the Environmental Affairs Board (EAB), the organization held the event as a temporary replacement for the Isla Vista Recreation & Park District (IVRPD)’s Adopt-A-Block, a weekly program in which volunteers pick up trash that has found its way onto Isla Vista streets and sidewalks.

“Since COVID, [IVRPD’s] capacity has significantly decreased, so they haven’t been able to put on Adopt-A-Blocks,” Guillen said. “So we wanted to do our own version of an Adopt-A-Block, where we go out on a Friday and just get everyone out together to clean up trash and make a difference in Isla Vista.”

The cleanups contribute to the environmental wellbeing of the community, not by reducing waste or preventing littering, but in mitigating its effects, said Lily Ortiz, a fourth-year biological sciences major and co-chair of the EAB.

“Obviously, we’re not reducing plastic waste, but we’re at least preventing it from going into the ocean and safe spaces of animals,” Ortiz said. “So I think we’re making some sort of difference even if it is on a small and gradual scale.”

Volunteers met at Camino Pescadero Park on the day of the event, where Guillen, Ortiz and other members of the EAB distributed gloves and buckets. They emphasized that volunteers were not obligated to pick up any litter if they felt it was hazardous or unsafe to handle.

The volunteers then split into two groups, traveling in opposite directions on Del Playa Drive.

For Liliy Villarreal, a third-year environmental studies major and one of the volunteers, the EAB event was her second block cleanup and her first of the quarter. Her haul for the day consisted of disposable masks, a Whip-It! canister, napkins and an empty Pizza My Heart takeout box.

“I think [picking up trash is] a great way to give back to your community,” she said. “Just express some solidarity and helping out whenever you can.”

Villarreal said another reason she attended the block cleanup was to put her ideals to work.

“Definitely take action about the issues that you care about. It’s one thing to talk about them. It’s another thing to [take] action,” Villarreal said. “So whether it’s by yourself, with friends or with an organization, any action is better than no action.”

The group filled their buckets 25 minutes into the event. Eventually, they stopped at Window to the Sea Park, weighing the items they had collected so far and emptying their buckets into trash bins.

Emily Cohen, a second-year environmental studies major and an administrative assistant for the EAB, attended the block cleanup for the first time on Friday. The items she picked up included bottle caps, cigarettes, takeout bags and paper, and disappointment mingled with satisfaction.

“A lot of it was sad because it was recyclable,” she said. “So not only was it littering, you’re wasting potential there to remake stuff.”

Cohen said she hoped that the Block Clean Up also inspires other Isla Vista community members to be mindful of their litter or pick up trash they see on the street.

“Picking up a bottle isn’t gonna make that big a difference,” she said. “But if other people see you doing that, and they start picking up bottles, too, it all adds up. So I think that’s really where it counts.”

Reflecting on the root causes of littering, Guillen and Ortiz speculated on a number of reasons, including a lack of access — for example, an insufficient number of public waste disposal resources like trash cans — and a lack of knowledge on where to recycle.

However, Guillen said that she believes the issue runs deeper than material lack, reflecting the lack of responsibility that the student community feels to maintain its surroundings.

“It is just kind of a lack of community responsibility, because it is a college town,” she said. “They don’t think about the overall well-being of Isla Vista after they leave — when in reality, it is a community where families live, teachers live, we have an elderly population, our own staff and faculty at UCSB work and live here.”

To improve consumer knowledge of the environment, Ortiz said that the EAB has previously given and will continue to give educational presentations on topics such as plastic, oil and recycling.

But the EAB can only do so much, Guillen said.

“You can’t make people care about things, which is something that, as an environmentalist, I find really frustrating sometimes,” she said. “You can give people information, and you can give them facts and you can let them know what’s going on. But it usually takes some sort of individual connection to these things to be willing to change behavioral patterns.”

“I think there is hope. It’s just going to take experiences for other folks to have,” Guillen continued. “I think everyone has the capacity to change and do better and be better. So I’d like to believe in that.”